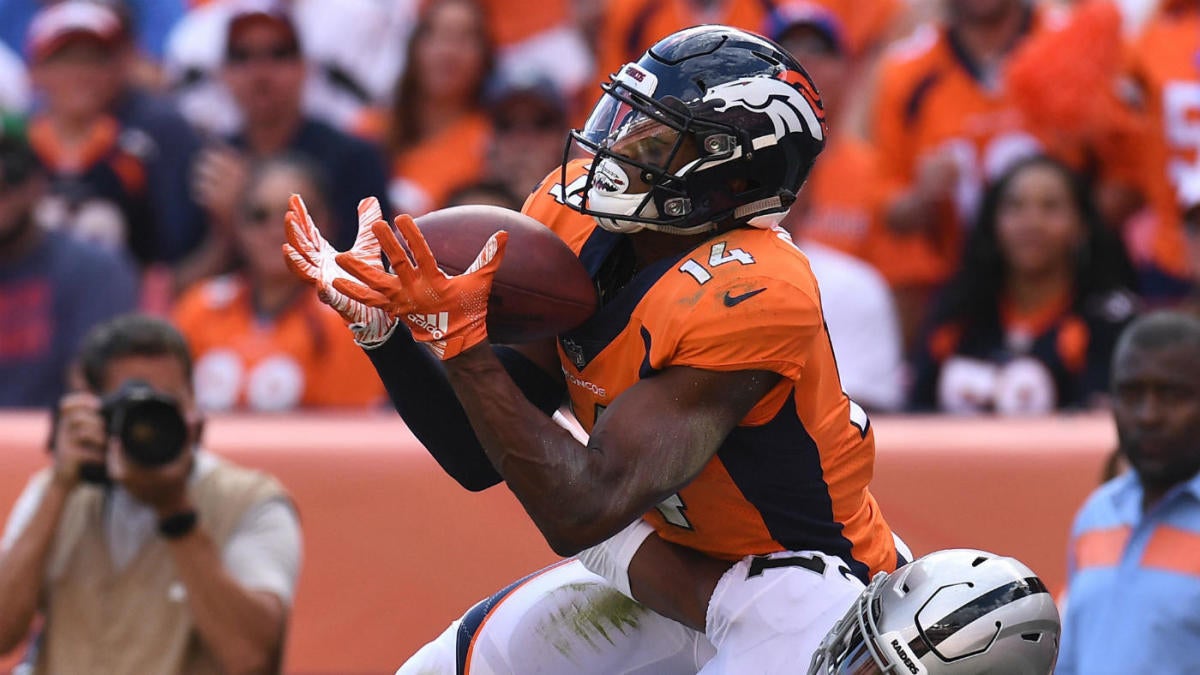 It’s been a while since we’ve had to worry and wonder about the Broncos‘ plan at wide receiver, but the days of both Demaryius Thomas and Emmanuel Sanders operating at the peak of their powers and turning the receiver position into a strength of the team are long gone.

After a midseason trade to Houston and an offseason deal with New England, Thomas is no longer with the team. After a torn Achilles that ended his season in December, Sanders isn’t a lock to be healthy enough to step out onto the field come Week 1. As a result, wide receiver should be one of more intriguing positions to monitor at Broncos training camp.

Under new coach Vic Fangio, the team opens up camp on Wednesday. With a new coach comes a brand new system on both sides of the ball. Fangio, a defensive mastermind, should handle the defense, which was already highly regarded before his arrival. There’s not much to worry about there.

But potential problems exist on offense. While most of the attention over the summer will undoubtedly be directed toward rookie quarterback Drew Lock as he tries to prove he’s ready to replace veteran Joe Flacco sooner rather than later, the positional battle at receiver might be just as important. Thomas is gone. Sanders is hurt. The Broncos didn’t do much to reinforce the position in the offseason, focusing their attention elsewhere. If Sanders misses time, they’ll need one of their young, unproven targets to step up. All together, there are a dozen receivers on the Broncos’ roster.

As the Broncos open up training camp, let’s take a closer look at how the battle at receiver might unfold.

Emmanuel Sanders
If healthy, Sanders should remain the Broncos’ best receiver. Since joining the Broncos in 2014, he’s averaged nearly 1,000 yards and a little more than five touchdowns per season. It still feels like he’s underappreciated. That said, Sanders is 32. He tore his Achilles in December. While he’s hoping to return in time for Week 1, he’s “not going to be full-go” when training camp begins. Given the timing of the injury and his age, it wouldn’t be surprising if he’s not 100 percent by the time the season rolls around or if he has to sit a week or two in September. It also wouldn’t be surprising if he takes a step back in his 10th NFL season after a major injury.

Courtland Sutton
Sutton is poised to take the biggest step forward in 2019. A second-round pick a year ago, Sutton excelled in his rookie season even though the Broncos’ quarterback situation was less than ideal. After a 42-catch, 704-yard, four-touchdown rookie season, expect Sutton to take on a large role regardless of Sanders’ health. The Broncos don’t need to worry about him.

DaeSean Hamilton
Hamilton is also key to the Broncos’ plans. A fourth-round pick last year, Hamilton caught 30 passes for 243 yards and two touchdowns. Expect a ton of his usage to come out of the slot. If things go as planned, Hamilton will be the team’s third option at receiver. But he averaged only 8.1 yards per catch last season. That number needs to go way up in Year 2.

Tim Patrick
As it stands, Patrick is best positioned to take on a larger role should Sanders (or any of the other starting receivers) miss some time. An undrafted free agent in 2017, Patrick spent time with both the Ravens and the 49ers before latching on with the Broncos. From a statistical standpoint, he actually played better than or just as good as Hamilton last season with 23 catches, 315 yards (13.7 yards per catch), and a touchdown. While Sanders is out, look for Patrick to get the first look at stepping into the starting lineup.

Juwann Winfree
As a sixth-round rookie, Winfree might need time to acclimate to the NFL, but he’s also well-positioned to make the regular-season roster. During his final college season at Colorado, Winfree caught 28 passes for 324 yards and two scores. As NFL.com’s Lance Zierlein wrote in his pre-draft profile, Winfree is “considered an upside prospect with plenty of meat left on the bone from a developmental standpoint.” So, it’s unlikely he’ll crack the starting lineup in 2019, but it’s also unlikely the Broncos will cut him loose before giving him a chance to develop in their system.

Trinity Benson
Benson also has a decent shot to make the roster and thus, contribute during the season. But if he does make the roster, he’ll probably do so as a returner. As Nicki Jhabvala wrote for The Athletic last week, Benson could be a surprise (in a good way) at training camp despite going undrafted. He’s a speedster and operated in the slot and on the outside at East Central (a Division II program) in addition to returning kickoffs.

River Cracraft
Cracraft didn’t do much of anything as a receiver last season, catching one pass for 44 yards. He functioned mainly as a returner with 12 punt returns and three kickoff returns. But Cracraft does have an impressive college resume as a receiver. Over a four-year career at Washington State, he averaged 675.3 yards and five touchdowns per season. He could be a surprise breakout candidate if given more opportunities as a pass catcher.

Aaron Burbridge
Where Burbridge might have an advantage is in mastering new offensive coordinator Rich Scangarello’s offense. Scangarello spent the last two years in San Francisco as the 49ers’ quarterbacks coach. Burbridge was drafted by the 49ers in 2016. That season, Burbridge caught seven passes for 88 yards. He didn’t leave the 49ers until this past November.

Romell Guerrier
Guerrier will need a big training camp and summer to make the final roster. He went undrafted this year after a career at Florida Tech that saw him rack up 1,654 yards and 17 touchdowns across three seasons. He’s not a big receiver (5-foot-10), but he is fast (4.46 in the 40-yard dash).

Fred Brown
After spending some of the 2017 season on the Colts‘ and Rams’ practice squads, Brown joined the Broncos at the end of December. In his final college season at Mississippi State in 2015, Brown totaled career highs in receptions (27), yards (412), and touchdowns (3). He’s most likely a practice squad candidate barring a breakout performance in the preseason.

Kelvin McKnight
Another undrafted rookie, McKnight enjoyed a great final season at Samford when he caught 100 passes for 1,453 yards and nine touchdowns. He lacks size (5-foot-8). And he disappointed with a slow 40-time at his pro day. He’s likely another practice squad candidate.

Brendan Langley
Langley switched from cornerback to receiver this offseason. He’s a good athlete, but given his inexperience at the position at the professional level, he’s mostly an unknown as training camp begins.

They’re not receivers, but they should play a role in the passing game, which makes them worth a brief mention here.

Noah Fant
Fant will almost certainly play a huge role in the passing game, which will help the Broncos overcome any Achilles-related issues that Sanders will face. The first-round pick is regarded as a potential game-changing, pass-catching tight end.

Bug Howard
Howard’s an interesting prospect. He’s listed as a tight end, but he played receiver at North Carolina. In his final college season in 2016, he caught 53 passes for 827 yards and eight touchdowns. He’s been unable to latch onto an NFL team ever since and even played with the Atlanta Legends of the AAF before the league folded. We’ll see if he can catch on at tight end in Denver, where his pass-catching skills would come in handy.