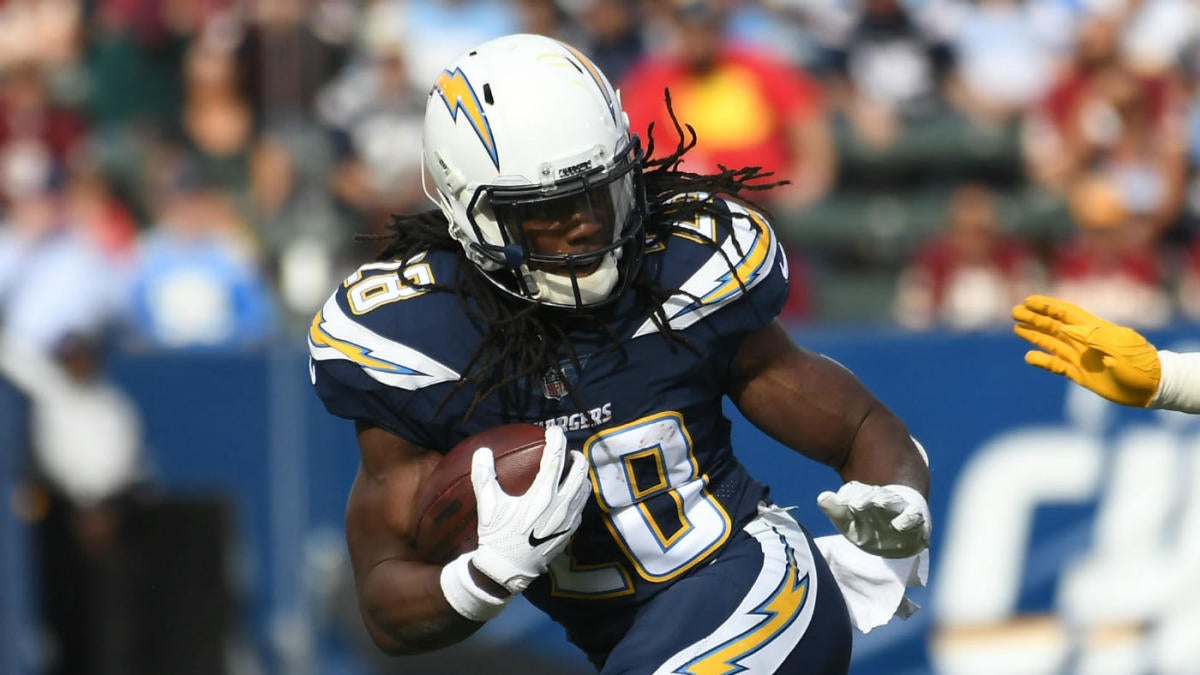 The Los Angeles Chargers Super Bowl bandwagon (driver: me) hit a speed bump late last week when Melvin Gordon’s camp let it be known quite loudly that the Chargers running back was interested in getting a new contract from the team before the 2019 season began. Gordon also said that, sans contract, he would like to be traded. There are concerns a holdout could linger well into the season.

Running backs are fungible, but Gordon is an important piece to this L.A. offense. The former first-round pick, heading into his fifth year, has become more dynamic in the passing game and has an excellent nose for the end zone. If you’re doing a top 10 running back list, he’s outside the “big four” but he’s right there near the top. He’s also a very good “Madden” player, for whatever that’s worth. (Not much. I just want to mention that I played Melvin in “Madden” one time.)

His importance to the Chargers explains why he’s making a stink now. He knows there are potentially two franchise tags coming for him after the 2019 season. The Chargers control him for the next three years if they want; it’s a perfect situation for them, because they can keep their former first-round pick in house on what ostensibly amount to one-year deals over the next three years.

Gordon wants to put pressure on the team while he can. The Chargers see a Super Bowl window and if Gordon creates an issue, they might be willing to pony up now in order to limit the distractions. Austin Ekeler and Justin Jackson are very capable but they’re not as good as Gordon.

So there’s a gap to bridge here and it’s a pretty significant one. But as I discussed with CBS Sports NFL Insider Jason La Canfora on the latest edition of the Pick Six Podcast (subscribe via Apple Podcast, via Spotify or via Stitcher and listen to the show in the player below), there actually is a decent window for the two sides to work out a contract.

For the Chargers, there is the concern, as JLC noted, that Gordon doesn’t show up. There is the problem of not really having a market for trading him, because whoever would theoretically acquire him needs to also pay Gordon.

“I don’t think he’s showing up for the start of camp without a new deal,” La Canfora said. “And I think he’ll be willing to be stuck in for a significant period of time if need be. I don’t know that there’s a feasible trade out there. I spent the weekend sort of going through various scenarios.

“The Chargers aren’t going to give him away. It’s not just so much that you can’t get anything for Melvin Gordon. You can. There will be people who will give you something. Even then it’s a small market of teams, but someone will give you something of value for Melvin Gordon. But then they got to go around and to get him to play, we’ve got to pay you, 85 percent of Todd Gurley money or whatever that percentage turns out to be.”

But for Gordon there’s also the problem of not being in the same shoes as Le’Veon Bell. He isn’t being franchise tagged like Bell — his contract will toll if he doesn’t report and he’ll be stuck under team control despite being older.

“Le’Veon Bell could have been traded last year. And he wasn’t. And that was before the thing lasted a whole season and wiped all that out. I just don’t see a trade being the answer,” La Canfora continued. “And I don’t see him sitting out a year, because the contract tolls and now you’re a year older and they still have your rights for three more years.”

So both sides know this is ultimately a fairly sanitary game of chicken they’re playing. Gordon won’t completely skip the season and the Chargers won’t completely ditch him. There’s a really reasonable spot to work something out.

“I think at the end of the day, they get something done. I don’t think it’s a six-year mega contract,” La Canfora pointed out. “I think he gets more money in his pocket right now and they buy out at least one of his franchise years, maybe a little bit more. I think there’s a two-year bridge contract to be done.”

As I noted, I agreed with him completely and made a similar point on a previous contract. Let’s dive into the specifics of what might work.

Why a two-year deal?

Gordon is under actual control for one more year. He is making $5.6 million in 2019 on his fifth-year option after being a first-round pick in 2015. Picking it up was a no-brainer; in hindsight Gordon would have preferred falling to the second round because he’d be making about $6 million more this year if he didn’t hit free agency outright. Because of the fifth-year option, Gordon is eligible for a franchise tag in 2020 and 2021. That’s three, one-year deals. It’s a great setup for the Chargers, but obviously Gordon would prefer to get “married” versus simply “dating” the team.

By adding a two-year extension onto Gordon’s current deal, the Chargers would be “proposing” (just play along) a longer-term union between the two parties. They’re probably planning on keeping Gordon for three years as it stands right now anyway. Why not figure out a way to have him around that long and keep him happy in the process?

What kind of deal would it be?

So, as mentioned, this would be a two-year extension the Chargers give Melvin. Let’s start by pointing out that the franchise tag value for running backs actually DROPPED this year, despite Todd Gurley signing a mega deal. Le’Veon Bell’s contract (signed after the cap was set and tag numbers were calculated) should bump it up a bit. In general we’re probably staring at something in the range of $11.5 million next year, very roughly calculated. Let’s go with that $11.5 million for the sake of making the numbers easier. That would mean Gordon stands to make $13.8 million (120%) in the 2021 season. So we’re staring at a total income of right around $30.9 million for the full three years.

That’s PERFECT. Look at the current RB salaries out there. Gurley is making $14.375 million per year. Unfortunately his injury issues submarined the notion that any running back is going to top that. It’s not the number to beat, it’s an outlier.

Bell is making $13.125 million per year. He got that in true free agency. You can’t expect to beat that when the team has three years of control. That’s how negotiations work.

David Johnson is the template here. The Cardinals gave Johnson a three-year, $39 million contract before the 2018 season. They did so because a) Johnson was due for an extension, b) he has shown he can be an elite back in both the running and passing games, c) it gave him some cash in his pocket now and d) they got him fairly below market value because of injury.

Johnson’s deal takes him through his age 29 season (2021). If the Cardinals so choose, they can cut him after 2020 and save $9 million in cap space. It’s short-term deal that is friendly for both sides in how it’s created — cash for the player now and limited exposure long term for the team.

The Chargers should offer something similar to Gordon. Approach him with a two-year extension that will pay him $26 million, with some wiggle room on the back end in that third year if Gordon is injured or struggles to produce. That’s $13 million per year in “new money” that his agent can tout publicly.

For Los Angeles it’s a deal that pays him $31.6 million over the course of three years, $600,000 more than they would pay him by doing three different one-year deals. It gives the team some salary cap room to play with, it gives them the option to bail in that third year and it eliminates three separate offseason quagmires with their running back as they try to win a Super Bowl in the final years of Philip Rivers‘ window.

The Chargers’ window is made even easier with a host of young stars — Joey Bosa, Derwin James, Hunter Henry — on cheap rookie deals.

Gordon would take the deal because he would get cash in his pocket in the form of a signing bonus (Johnson got $12 million but the Chargers could easily just go $9 million and spread it out across three years).

It’s a pretty simple win-win for everyone involved that can eliminate these issues over the next three years and get the Chargers focused on what matters: chasing that extremely elusive Lombardi.