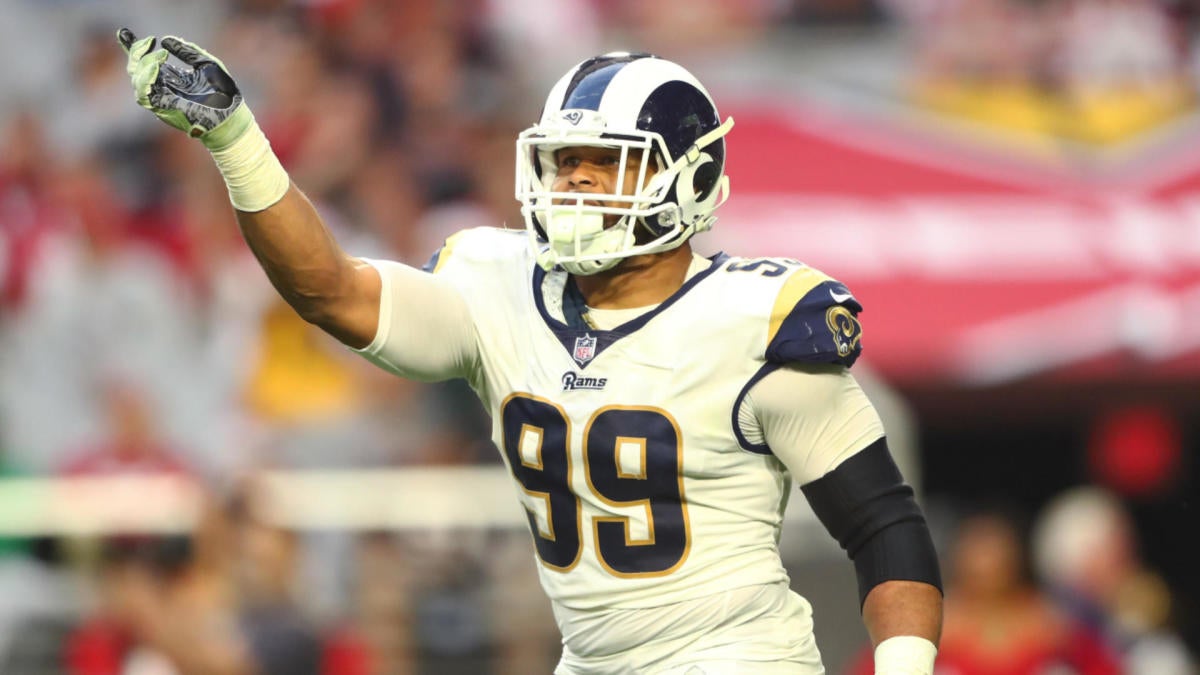 ‘Madden NFL 20’ is set to be released on Aug. 2 and the ratings for the top players have been revealed, with four getting the coveted 99 rating in the video game.

They say defense wins championships, and that seems to be the case in the upcoming Madden game too, with three of the four top rated players playing on that side of the ball.

The ’99 club’ member were revealed in a mural painted by Jaime Guerrero in Los Angeles.

This year that number dwindles to four.

Donald was drafted by the St. Louis Rams in 2014 as the 13th overall pick,. In the 2018-2019 season, No. 99 recorded 20.5 sacks pushing his overall career number up to 59.5. He ended the year with 41 solo tackles and helped his team turn the ball over with four forced fumbles in their NFC Championship run.

Donald and the Rams made it to the biggest stage in football, where he had five total tackles, but Los Angeles fell to the Patriots in Super Bowl 53.

Donald has dominated on the field since high school, and now the defensive tackle is dominating on the Madden field as well.

Last season Wagner was dominant on defense with 84 solo sacks, putting him at 591 solo tackles in his NFL career. He also ended the season with two forced fumbles and a sack.

In a week 13 victory over the 49ers, No. 54 had an interception at the goal-line and returned it 98-yards for a touchdown.

The Seahawks made it to the playoffs but fell in the wild card round to the Dallas Cowboys in a thrilling 24-22 game, where Wagner recorded three solo tackles and assisted on two others.

He was named to the Pro Bowl and First-Team All-Pro in 2018. Wagner joked about the rating being a dream of his.

Mack played his first season with the Bears in 2018 after years with the Oakland Raiders. He made his mark in Chicago with 37 solo tackles, 10 assisted tackles, and 10 tackles resulting in a loss of yards.

He’s been a quarterback’s worst nightmare, getting to the signal caller 18 times with a hit and 12.5 sacks.

No. 52 got the ball back to his offense with six forced fumbles and one interception with a 27-yard return. Mack was selected for the Pro Bowl and named First-Team All-Pro in 2018.

The Bears finished first in their division but lost to the then-defending Super Bowl Champion Philadelphia Eagles in a nail-biting 16-15 result.

The success didn’t happen overnight for Mack, as he noted on Twitter. Back when he was in college, his ranking in EA Sports’ college football video game was 46.

Hopkins stands alone as the only offensive player on this list, coming off a season where he finished with 1,572 receiving yards.

The receiver had 115 receptions on the year, averaging 13.7 yards per catch. Targeted by Texans QB Deshaun Watson 165 times, Hopkins’ catch percentage was a career-high 70.6 percent. His next highest was in 2014 where he caught 59.8 percent of footballs thrown his way.

His longest reception came in at 49 yards, his lowest in that category in his NFL career, and he finished last season with 11 touchdowns. Hopkins was named to the Pro Bowl and was First-Team All-Pro in 2018.

The Texans star can’t believe he is one of just four who have a 99 rating in the game.