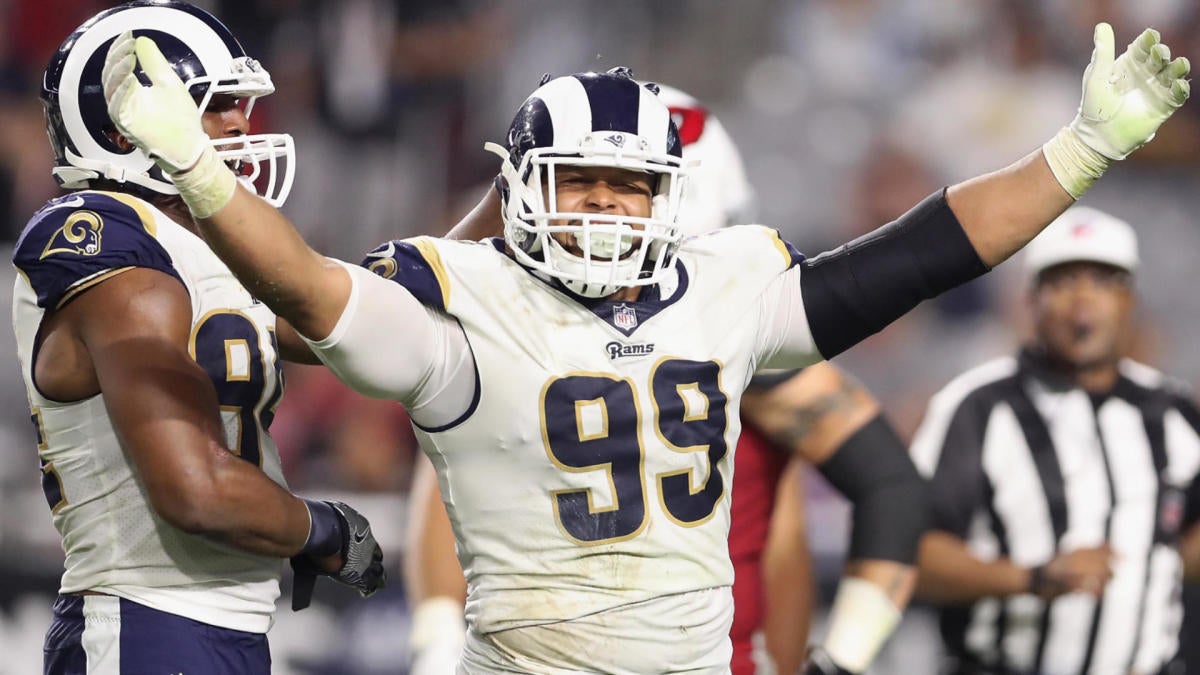 If we needed confirmation, the 2019 NFL Draft was a reminder that stocking up on defensive linemen and edge rushers isn’t a bad roster-building strategy. Eleven such players went in the first round, starting with Nick Bosa at No. 2. The last time that many defensive linemen and pass rushers were selected? It was 2011, when 13 players heard their name called. And the second-overall pick in that draft finds himself as the No. 1 edge rusher on our list here.

So how were these rankings determined? The players were ranked collectively by 11 members of the CBSSports.com NFL writing and editorial staff. We each ranked our top 10 — both along the defensive line and at edge rusher — and our individual ballots were then turned into one list using a point system. So before you get angry, this isn’t our personal list, it’s a consensus.

OK, let’s get to it. First up: The edge rushers.

For as amazing as the Chiefs’ offense was last season, the defense was a different story. This was a recurring storyline throughout the regular season and it all came to a head in the AFC Championship Game, when the Chiefs couldn’t get off the field because they were equally incapable of stopping the run and the pass. The unit ranked 26th overall and was dead last in rush defense. And this explains why the offseason was devoted to beefing up the defensive line, starting with Clark (in addition to Emmanuel Ogbah, Alex Okafor) as well as the secondary (Bashaud Breeland and Tyrann Mathieu in free agency and Juan Thornhill in the draft). Clark had 13 sacks for the Seahawks in 2018 and graded out as the No. 18 edge rusher according to Pro Football Focus.

The Vikings signed Hunter to a five-year, $72 million deal last summer and it was money well spent. The 24-year-old logged a career-best 14.5 sacks and is only going to get better.

The Texans franchised Clowney this offseason which means he’ll make $15.97 million — as soon as he signs his tender. He wants to be paid like one of the league’s best pass rushers, and understandably so. He’s never had double-digit sacks but he logged 9 and 9.5 the last two seasons, both career highs.

Lawrence is fresh off a well-earned five-year deal worth more than $100 million. The centerpiece of the Cowboys’ young defense had 10.5 sacks last season and 14.5 the season before.

Campbell, 32, is entering his 12th NFL season. He spent the first nine years in Arizona and has anchored the defensive line in Jacksonville since 2017. In those two years, he had 14.5 and 10.5 sacks, which was also the first time he had double-digit sack totals.

The first-overall pick in the 2017 draft class, Garrett had seven sacks in 11 games as a rookie then exploded for 13.5 sacks last season. The Browns have the best Super Bowl odds in the AFC North and any success they have in 2019 will in large part be due to how well their defense performs.

Jordan, who turns 30 on July 10, was the 24th pick in a 2011 draft class that was stocked with defensive linemen and pass rushers. That group began with Von Miller at No. 2 and included Aldon Smith (No. 7), J.J. Watt (No. 11), Ryan Kerrigan (No. 16), Adrian Clayborn (No. 20), Jordan, Muhammad Wilkerson (30) and Cam Heyward (31). In eight NFL seasons, Jordan has started 127 of 128 games and in 2018 he registered 12 sacks — the fourth time he logged double-digit sack totals. He ranked No. 5 among all edge defenders last season, according to Pro Football Focus, behind Calais Campbell, Khalil Mack, J.J. Watt and Von Miller.

Remember early in the ’18 season when Jon Gruden kept complaining about the lack of a pass rush? This is what happens when you ship your best player — and one of the NFL’s best players — out of town. Mack had 12.5 sacks for the NFL’s No. 1 defense and played a large role in taking Chicago to the top of the NFC North. At 28, his best days remain in front of him.

Ryan Wilson and host Will Brinson break down the top 10 EDGE and defensive tackles on Thursday’s Pick Six Podcast:

Jarrett was franchised earlier this offseason and the plan, according to owner Arthur Blank, is to make him a Falcon for life. And for good reason: he ranked fifth among all interior defensive linemen last season, according to PFF’s grades.

Heyward was part of that stacked 2011 draft class and he’s consistently been one of the best 3-4 defensive ends during his eight seasons. He’s logged 20 sacks the last two season.

The 2016 first-round pick has lived up to the billing; he had six sacks and three passes defended last season and ranked No. 9 among all defensive interior linemen, via PFF’s grades.

The 49ers have used a first-round pick on a defensive linemen in four of the last five drafts. Nick Bosa was the most recent example but in 2016, the selected Buckner seventh overall and it has proven to be an astute decision. Buckner had a career-best 12 sacks last season (which doubled his previous best) and he’ll anchor a unit that should be much improved over 2018.

Casey was part of the esteemed 2011 draft class but he didn’t hear his name called until Round 3. That said, he might be one of the NFL’s most underrated players. He ranked 14th in PFF’s grades last season and since 2015 he’s averaged just over six sacks a season.

Atkins somehow lasted until the fourth round of the 2010 draft. Now 31, he’s not quite as dynamic as he was early in his career but he’s still a force. Atkins had 10 sacks last season and has logged 71 sacks in nine seasons.

It’s easy to overlook Hicks because he plays on the same defense with Khalil Mack. But the man is a terror; he’s No. 4 among all defensive tackles, according to PFF, behind only Aaron Donald, Fletcher Cox and Damon Harrison. Hicks had 7.5 sacks and five passes defended in 2018.

Jones, who just turned 25, had 15.5 sacks (!) last season, making him the No. 2 interior pass rusher, according to PFF. In 2019, he’ll play alongside Frank Clark, which means he’ll have a chance to improve on those career-best totals.

Cox’s best season came in 2018 when he had a career-high 10.5 sacks. The 28-year-old hasn’t yet hit his prime but he was the No. 2-ranked interior lineman last season, according to PFF.

This should come as no surprise to anyone. Not only is Donald the best defensive lineman on the planet, he’s one of the best football players too. The advanced metrics agree and the conventional stats confirm as much; Donald is coming off a 20.5-sack season. In five seasons, he has 59.9 sacks — and to reiterate, Donald is a defensive tackle.