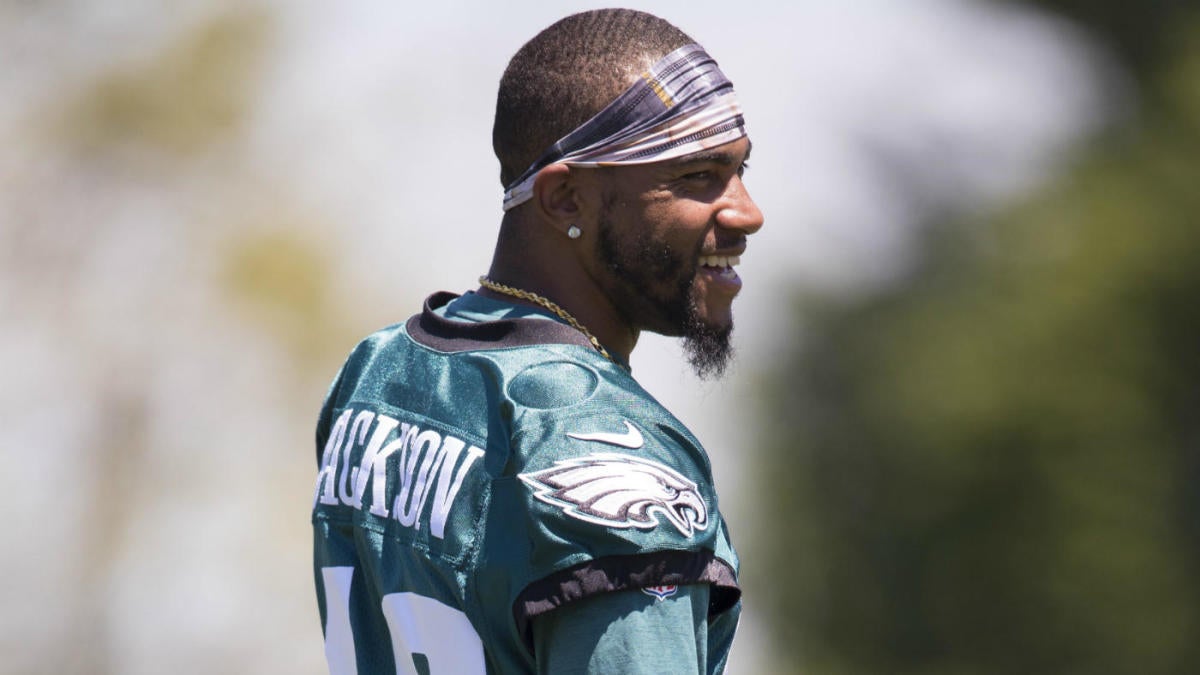 Five years ago, DeSean Jackson was preparing for his first NFL season outside of Philadelphia, and after conflicting reports about his relationships in and outside of the city, it seemed obvious he’d never play for the Eagles again.

But here we are, five years later, and DeSean Jackson is an Eagle again.

Philly traded for its former Pro Bowler in March, but until fall rolls around and Lincoln Financial Field plays host to Jackson’s familiar No. 10, even pictures of the veteran wide receiver in midnight green still evoke nostalgia more than reality. Jackson went from fan-favorite hotshot to banished division rival so quickly back in 2014 that many Eagles fans had hardly a moment to appreciate their deep threat’s six seasons of big-play action before lumping him into the same loathsome crop of countless other NFC East foes.

And yet, surreal as his return may be, there might not be a bigger X-factor on the 2019 Eagles than the wideout himself.

The big question ahead of Jackson’s homecoming isn’t whether he fits in with a familiar, albeit remodeled, franchise. It is this: How high can he extend its ceiling?

Up front, we must acknowledge the inevitable, understandable concerns: Jackson is no spring chicken at age 32, and even more pertinent, he has not played a full 16-game season since he last suited up for the Eagles six years ago. He’s had three or fewer catches in 21 of his last 41 games (51%) and has carried the “one-trick pony” reputation since his original days in Philly. He’s scored no more than four touchdowns in four consecutive seasons.

How in the world is that guy the biggest X-factor on a team with aspirations of a second Super Bowl in three years?

For one, that guy has long been — and remains — among the most elite deep-ball threats in the game. Riding a quasi-effective Torrey Smith is one thing (see: Eagles’ Super Bowl season). Investing in the NFL’s active leader in yards-per-catch average (17.4) is another.

As for the “one-trick pony” label, Jackson can — and should — happily embrace it, not only because he’s proven to be one of the best at his particular trick (he posted an NFL-leading 18.9 YPC average at age 31) but because, in Philly’s current setup, he shouldn’t ever have to be anything more than the field-stretcher he is.

When Jackson last played for the Eagles, he lined up opposite Riley Cooper and Jason Avant. In 2019, he will play in an offense that includes Alshon Jeffery, Zach Ertz, Nelson Agholor, Dallas Goedert, Jordan Howard, Miles Sanders and maybe the NFL’s top offensive line. Consider this side-by-side look at the biggest members of Jackson’s supporting cast from both his last Philly run and his 2018 season with the Tampa Bay Buccaneers:

The 2013 Eagles don’t have much relevance to the 2019 Eagles except as an example of Philadelphia’s obvious superiority today — McCoy is an easy pick at running back over Howard, but you wouldn’t hesitate to ride with the rest of the Eagles’ current weapons over what the team had six years ago. Jackson’s most recent Tampa running mates paint the same picture: Never before has D-Jax had less pressure to deliver the game-changing plays in which he’s already specialized. If he can give the 2019 Eagles what he’s given every team every year, when healthy, and nothing more, he will go a long way in restoring the Birds’ title hopes.

Why? Because if there was one thing missing from the Eagles’ offense in 2018, it was juice. Explosion. Big plays. All the things Jackson and his “one-trick pony” self are famous for.

Nick Foles‘ historic playoff run the year prior proved that clutch pocket poise and top-level Doug Pederson scheming can make up for other flaws against the best of them, but Jeffery, Smith and Agholor all had their fair share of long-ball moments along the way. Any hopes the Eagles had of replicating, let alone one-upping, that flair in 2018 died when Mike Wallace, Smith’s replacement, went down with a season-ending injury in the second game of the year.

That’s not to suggest Wallace alone would’ve cured the passing-game woes, which were overblown at times but might now be undersold because of Wentz and Foles’ admirable 2018 statistics. Mortgaging a third-round draft pick for a proven target in Golden Tate didn’t do much to help, after all, although that gaffe can mostly be attributed to the fact Tate is almost exactly what Jackson is not — a compact slot possession receiver rather than an outside burner.

Jackson is still feared league-wide. His name alone ensures he’ll be a better decoy out of the gate than Smith. He is an X-factor not because he’ll be asked to be the “No. 1” but because he’s the piece that can put the Eagles over the top — both literally, in the field-stretching manner, and in the offense’s quest to regain its terrorizing 2017 form.

Barring a production drop-off that would defy both the way Jackson has aged and the early reports of his offseason domination, durability truly is the only thing that could prevent No. 10 from galloping straight back into the hearts of Eagles faithful and, more importantly, helping the team back to the promised land.

Freshly paid, Wentz has almost no excuses for 2019. Demanding MVP-level production might be a tall order for a quarterback coming off back-to-back season-ending injuries, including a longstanding back issue. But finding weaknesses throughout the starting lineup, not to mention the team’s reserves, is an even taller order. Eagles players have said it themselves: They are deeper and more talented now — seriously — than when they won the Lombardi.

Jackson is one of the biggest, flashiest reasons for that. If he’s on the field in 2019, you can count on the Eagles calling his name.