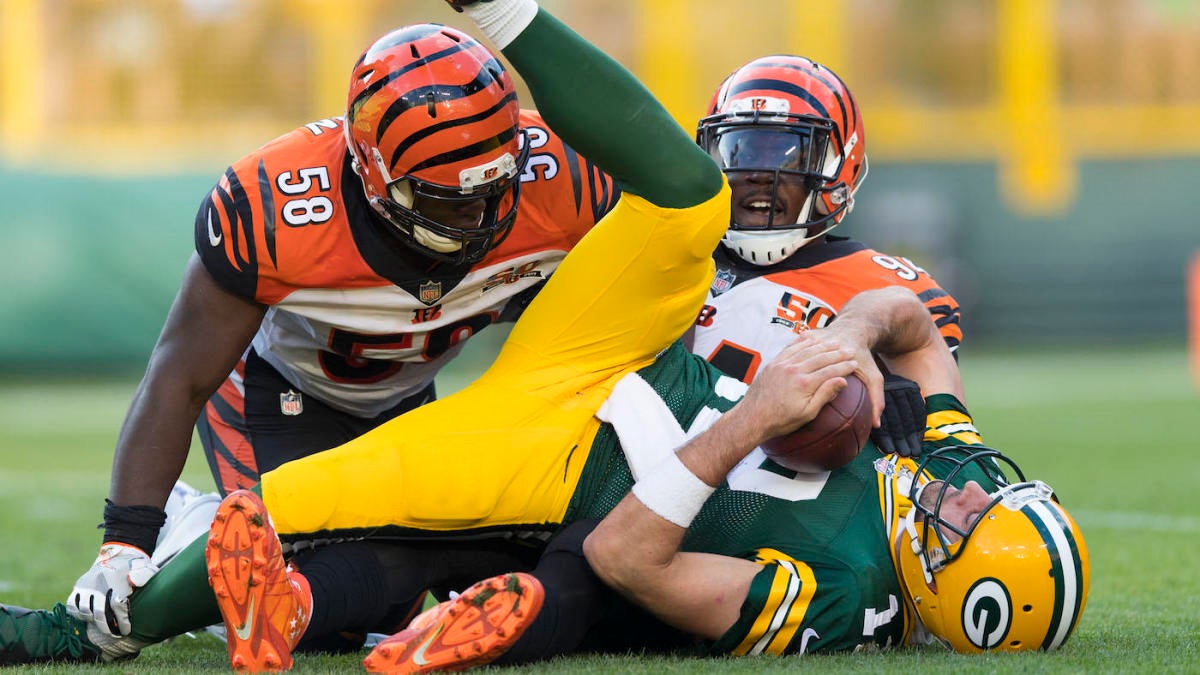 In recent seasons, as the Packers regressed from a Super Bowl frontrunner to a team merely fighting for a spot in the playoffs, Mike McCarthy’s antiquated offense came under fire for its failure to create simple and easy throws while Aaron Rodgers faced criticism for always wanting to hit a home run when he dropped back to pass.

So, even though Rodgers is athletic enough to dodge incoming pass rushers, it shouldn’t come as too much of a surprise to hear that he might be one of the easier quarterbacks to bring down. According to Bengals edge rusher Carl Lawson, who notched 2.5 sacks against Rodgers during the 2017 season, Rodgers isn’t a difficult quarterback to sack.

“Honestly, I think it’s easier to sack Aaron Rodgers than most quarterbacks,” Lawson told NFL Network’s “Good Morning Football” on Monday. “He sits there, and he pats the ball. At the same time, sacking him don’t mean nothing if you don’t do it for four quarters. You know, he came back against us.

“So, I mean, he’s an easier quarterback for me to sack personally, because he sits there, and he probably gets eight to 10 yards in the pocket. He’s got a great left tackle in (David Bakhtiari). So, he just sits there, he waits, he waits, getting that read. When he gets sacked, he doesn’t get flustered. I only saw him get frustrated maybe one time when I did sack him, which was the third and a half sack that they took off (negated by a penalty)…”

Again, this shouldn’t come as a huge surprise. The Packers finally fired McCarthy in December in large part because his offense simply wasn’t working the way it did during the years when the Packers were competing for Super Bowls. Instead of using modern concepts to free up quick and easy throws, the Packers often relied on their receivers — an unproven group outside of Davante Adams — to win isolation routes while Rodgers waited for them to get open downfield. Rodgers, of course, also wasn’t faultless in the offense’s decline. It’s not all McCarthy’s fault he’s gone from the game’s best quarterback to one of the game’s best quarterbacks.

Unsurprisingly, Lawson named Brady as one of the toughest quarterbacks to sack. It’s also worth noting that in his response, Lawson appeared to indicate that he doesn’t think Rodgers has gotten enough help from his coaching staff.

“The toughest to sack? Those young quarterbacks that offensive coordinators like to protect,” Lawson said. “Maybe a (Mitchell) Trubisky, or someone like that. The guys that sit there maybe like five (steps), get the quick reads. The guys that are like — I’m not calling them not elite or nothing like that — but the guys that kind of have more help in their offense than opposed to (guys like Rodgers).

“And Tom Brady. I haven’t sacked him or played against him, I’ve just watched him. I watched the film and like ‘Oh, he’s getting that out in like 1.9, 2 (seconds).'”

The Packers replaced McCarthy with Matt LaFleur, who is regarded as an innovative offensive mind after his work under Sean McVay in Los Angeles. LaFleur’s one-year run in Tennessee as the Titans‘ offensive coordinator didn’t go well, but he was also forced to deal with injuries at the quarterback position. Not many coaches would’ve succeeded with Blaine Gabbert taking snaps. How Rodgers and LaFleur mesh will likely determine if the Packers are able to reclaim their spot atop the NFC North a season after they watched the Bears surpass them.

As for Lawson, after an awesome rookie season that included 8.5 sacks and a 2018 season that ended prematurely with a torn ACL, he told “Good Morning Football” his goal is to be ready in time for Week 1.