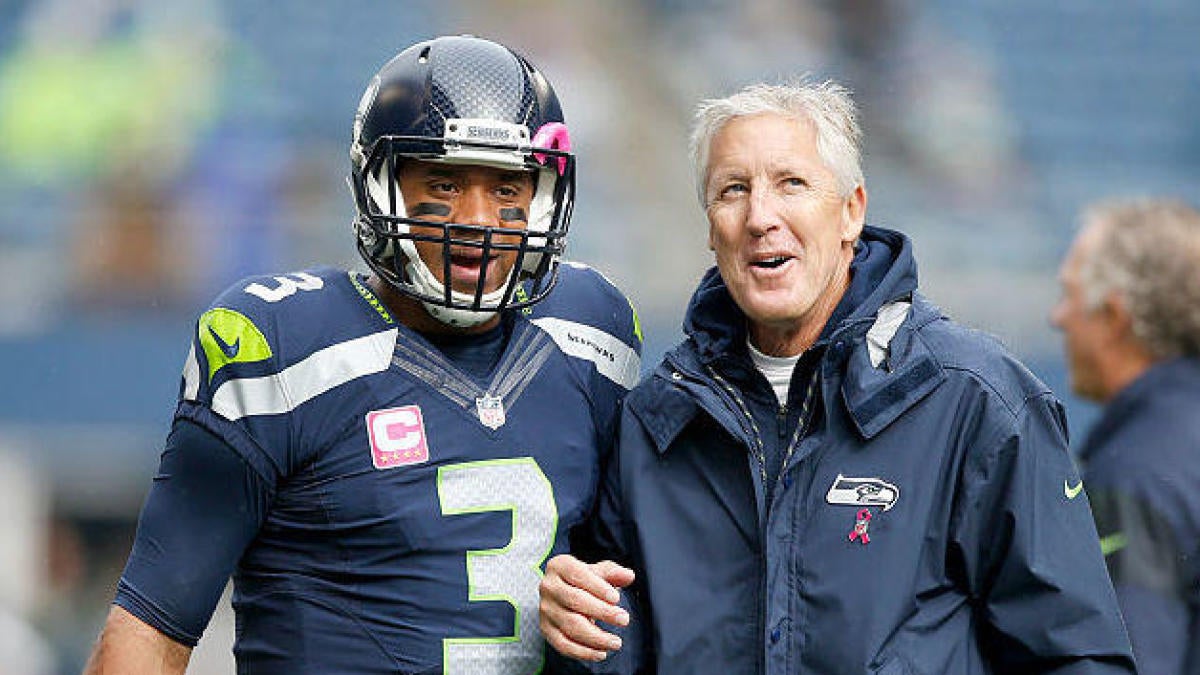 After watching the Rams win the NFC West for the past two seasons, the Seahawks might be stuck watching them win it again this year and that’s because the Rams have one slight advantage heading into 2019: They have an easier schedule, at least according to our NFL schedule ratings.

With the regular season still three months away, you might be wondering how we already know that the Rams have an easier schedule than the Seahawks, and that’s because we went ahead and ranked all 32 schedules.

The easiest way to rank each schedule in the NFL is to use strength of schedule, but the problem with going that route is that it’s not exactly the most efficient way to rate schedule difficulty, which is why we went ahead and devised a formula.

So how does this formula work? Glad you asked.

First, we looked at Super Bowl odds from the Westgate Las Vegas SuperBook. Since the oddsmakers in Vegas seem to know what they’re doing, we incorporated their odds into our formula, which didn’t work out so well for the Seahawks. Seattle’s schedule is filled with teams that are all considered serious Super Bowl contenders in Vegas, and five of their most difficult games will come on the road (At Eagles, at Rams, at Steelers, at Browns, at Falcons).

Another part of the formula is the first three games of the season. Those are going to be weighted slightly more than the other 13 games because they tend to be a good indication of how a team will play throughout the year. Basically, teams that go winless in their first three games almost never make the playoffs.

Since 1990, only four teams have started 0-3 and made the postseason (1992 Chargers,1995 Lions, 1998 Bills, 2018 Texans). Although the Texans pulled off the feat last year, there’s a reason it’s only happened four times in 29 seasons, and that’s because it’s nearly impossible to pull off.

This basically means that if your favorite team has a murderer’s row in the first three weeks of the season, you should probably just give up on 2019 and start planning for the 2020 draft.

Speaking of the first three games, it’s probably worth nothing that starting off the year with a winning record through the first three weeks has almost become a prerequisite for getting into a conference title game. Over the past four seasons, 15 of the 16 teams that took part in the AFC and NFC title games started the season at 2-1 or better. That doesn’t necessarily mean you’re favorite team will make it if they start 2-1, it just means they almost certainly won’t make it if they start 1-2 or 0-3. (Since 2015, the one team that bucked this trend was the 2018 Patriots, but the Patriots have bucked a lot of trends over the years and it’s unlikely that another team would be able to emulate them).

Finally, each individual game on each team’s schedule is also being ranked based on difficulty. For instance, the Seahawks have to travel to Pittsburgh to face the Steelers this season. On the other hand, the 49ers get to play the Steelers at home.

From a strength of schedule standpoint, the game is the same: Both teams are playing the Steelers. However, the Seahawks game against Pittsburgh is viewed as more difficult in our formula, because they have to go on the road to face a Steelers team that’s 7-1 against the NFC in home games over the past four seasons. On the other hand, the 49ers will be getting a serious home-field advantage in their game, and that’s because they’ll be hosting a Steelers team that features a coach and quarterback combo that has never won a single game together on the west coast (0-5). Those individual nuances are factored into the schedule ratings.

Alright, that’s enough rambling, let’s get to these rankings.

Wait, one more thing, if you’re interested in checking out the schedule rankings for every other team in the NFL, you can do that here. Just click on your favorite division and that will take you to those rankings: AFC East, AFC South, AFC North, AFC West, NFC East, NFC North and NFC South.

Easiest stretch: On paper, the 49ers easiest stretch of the season will come during the first two weeks of 2019 when they play the Buccaneers (Week 1) and Bengals (Week 2). However, we might want to crumple that paper up into a ball and set it on fire, because this stretch might not end up being too easy for the 49ers for one reason: Both of these games are being played on the road. Playing on the road in Tampa and Cincinnati means playing in the eastern time zone, and you’ll find out in our ‘Weird scheduling note” section why that’s a bad thing for the 49ers.

Roughest stretch: If 49ers fans start to feel a little sick around Thanksgiving, it will probably have nothing to do with the food and everything to do with the fact that San Francisco has an impossibly loaded schedule over the final six weeks of the season. The 49ers roughest stretch will start four days before Thanksgiving and it looks like this: Packers (Week 12), at Ravens (Week 13), at Saints (Week 14), Falcons (Week 15), Rams (Week 16), at Seahawks (Week 17).

If you’re scoring at home, that stretch includes four playoff teams from last season, including both teams that played in the NFC title game. Oh, and the two teams in that stretch that didn’t make the playoffs are both being quarterbacked by former NFL MVPs (Aaron Rodgers and Matt Ryan). To make things worse, the 49ers have to travel 10,038 miles during the month of December, which is more than five NFL teams will travel over the course of their entire season.

Weird scheduling note: The 49ers have four games in the eastern time zone this year, which we’re only mentioning, because that time zone has been like some sort of Bermuda triangle for them over the past four years. Since 2015, San Francisco has gone 0-12 when playing in eastern time. You know what, maybe that easy stretch won’t be so easy after all.

Easiest stretch: Sean McVay was probably the happiest guy in the room when he found out who the Rams would be playing over the final two weeks of the season, and that’s because it’s two games the Rams should win. First, the Rams will travel to San Francisco in Week 16 before hosting the Cardinals in Week 17. The reason McVay is probably thrilled with the fact that his team is closing the season with the 49ers and Cards is because L.A. went 4-0 combined against those two teams last season (McVay is also 7-1 overall against those two teams with his only loss coming to the 49ers in the 2017 season finale when the Rams’ rested all their starters).

Roughest stretch: The Rams better get some serious rest during their bye week, and that’s because their roughest stretch starts as soon as their bye week ends. Coming out of their Week 9 bye, the Rams schedule looks like this: At Steelers (Week 10), Bears (Week 11), Ravens (Week 12), at Cardinals (Week 13), Seahawks (Week 14). Not only will the Rams be playing against three teams that made the playoffs last season, but all three of those games will be played in primetime. The upside for the Rams is that all three of those games will be at home and they should also be getting a breather in Week 13 when they play the Cardinals.

Do the Rams actually like their schedule? A few key members of the team were filmed during the team’s schedule release back in April, so you can watch and judge for yourself below.

Easiest stretch: When you’re coming off a season where you had the worst record in the NFL, there aren’t really any “easy” stretches on your schedule, but there is one spot on their schedule where they get to play three straight teams who all struggled last season, and that stretch starts in Week 5: At Bengals, Falcons, at Giants. The only problem with this stretch is that the Cards’ have to play two of the three games on the road, which could be an issue for a team that’s only finished the season with a winning road record one time over the past nine seasons.

Roughest stretch: There’s a good chance Kliff’s Kingsbury’s first season with the Cardinals is going to end with a thud, and that’s because Arizona’s roughest stretch of the season will come at the very end of the year. After getting a Week 12 bye, the Cards will face a gauntlet that looks like this: Rams (Week 13), Steelers (Week 14), Browns (Week 15), at Seahawks (Week 16), at Rams (Week 17). Unless Kyler Murray turns out to have a combination of Patrick Mahomes‘ right arm and Lamar Jackson’s legs, the Cards are probably going to be in some serious trouble during this stretch.

Here’s a look at the Cardinals’ entire schedule:

Weird scheduling note: The month of November is going to be a boring one for Cardinals’ season-ticket holders and that’s because Arizona won’t play a single home game during the entire month. The Cards are one of just two teams in the NFL this year that will go a calendar month without playing a home game (The Jaguars are the other team, and November will also be rough for them, because they won’t be playing any games in Jacksonville).

Easiest stretch: If the race for the NFC West title goes down to the wire this year, that will definitely be an advantage for the Seahawks, and that’s because they’ll be closing the season with two very winnable games. Not only does Seattle get to play the Cardinals (Week 16) and 49ers (Week 17) to close the year, but the Seahawks get to play both games at home, making them one of just five teams in the NFL this season that gets to finish the season with two straight games at home. The NFL clearly must have felt guilty for everything on Seattle’s schedule prior to that, including the roughest stretch, which we’re about to get to.

Roughest stretch: The Seahawks have one of the best home-field advantages in football, but it won’t mean much come November and that’s because the NFL decided to throw that advantage out the window. From Nov. 3 until Dec. 21, the Seahawks will only get to play one home game during a stretch where they’ll be playing four of five games on the road. The stretch starts in Week 10 and looks like this: at 49ers, BYE, at Eagles, Vikings, at Rams, at Panthers. It’s probably also worth noting that every single one of those games will be played in primetime, except for the one in Carolina. The Seahawks are just 12-11-1 on the road over the past three seasons, which is why that could be a rough stretch for Seattle.