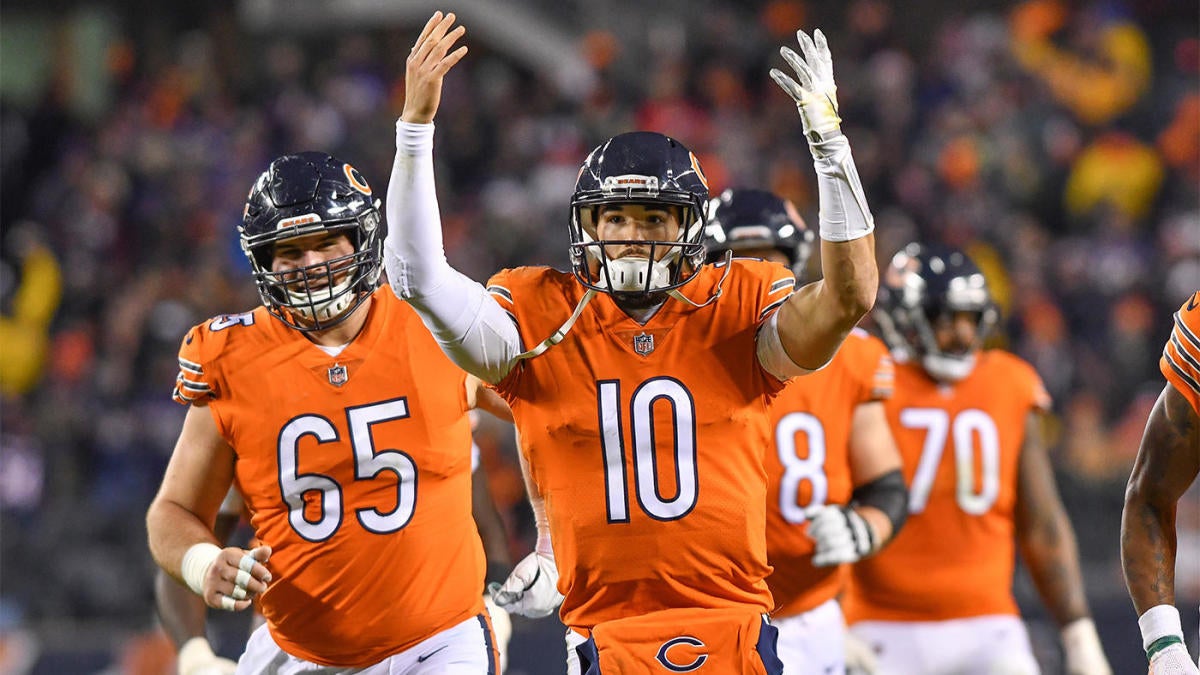 The Chicago Bears are celebrating their 100th anniversary as a team this season, but it might not end up being much of a celebration, and that’s because the Bears have the most difficult schedule in the NFL this year, at least according to our NFL schedule ratings.

According to our formula, every team in the NFC North got handed a pretty brutal schedule for 2019.

The easiest way to rank each schedule in the NFL is to use strength of schedule, but the problem with going that route is that it’s not exactly the most efficient way to rate schedule difficulty, which is why we went ahead and devised a formula.

So how does this formula work? Glad you asked.

First, we looked at Super Bowl odds from the Westgate Las Vegas SuperBook. Since the oddsmakers in Vegas seem to know what they’re doing, we incorporated their odds into our formula, which didn’t work out so well for the Bears. Chicago’s schedule is littered with teams that are all considered serious Super Bowl contenders in Vegas (Saints, Rams, Chiefs, Chargers, Eagles, Cowboys, Packers x 2, Vikings x 2).

Another part of the formula is the first three games of the season. Those are going to be weighted slightly more than the other 13 games because they tend to be a good indication of how a team will play throughout the year. Basically, teams that go winless in their first three games almost never make the playoffs.

Since 1990, only four teams have started 0-3 and made the postseason (1992 Chargers,1995 Lions, 1998 Bills, 2018 Texans). Although the Texans pulled off the feat last year, there’s a reason it’s only happened four times in 29 seasons, and that’s because it’s nearly impossible to pull off.

This basically means that if your favorite team has a murderer’s row in the first three weeks of the season, you should probably just give up on 2019 and start planning for the 2020 draft.

Speaking of the first three games, it’s probably worth nothing that starting off the year with a winning record through the first three weeks has almost become a prerequisite for getting into a conference title game. Over the past four seasons, 15 of the 16 teams that took part in the AFC and NFC title games started the season at 2-1 or better. That doesn’t necessarily mean you’re favorite team will make it if they start 2-1, it just means they almost certainly won’t make it if they start 1-2 or 0-3. (Since 2015, the one team that bucked this trend was the 2018 Patriots, but the Patriots have bucked a lot of trends over the years and it’s unlikely that another team would be able to emulate them).

Finally, each individual game on each team’s schedule is also being ranked based on difficulty. For instance, the Packers have to travel to Kansas City to face the Chiefs this season. On the other hand, the Bears get to play the Chiefs at home.

From a strength of schedule standpoint, the game is the same: Both teams are playing the Chiefs. However, the Packers game against Kansas City is viewed as more difficult in our formula, because they have to go on the road to face a Chiefs team that’s 6-1 in their past seven home primetime games. On the other hand, the Bears will be getting a serious home-field advantage in their game, because they’ll be hosting the Chiefs during a normally frigid time in Chicago (December). Those individual nuances are factored into the schedule ratings.

Alright, that’s enough rambling, let’s get to these rankings.

Wait, one more thing, if you’re interested in checking out the schedule rankings for every other team in the NFL, you can do that here. For the AFC, just click through on your favorite division: AFC East, AFC South, AFC North and AFC West. For the NFC, just click on the NFC East or NFC South to check out those divisions. For you NFC West fans out there, unfortunately, we won’t be releasing your divisional rankings until July 2, so you’re going to have to wait another day.

Easiest stretch: The Lions might have the easiest schedule in the division, but in the NFC North, that means absolutely nothing, and that’s because all four teams rank in the top-10 as far as schedule difficulty goes.
What that means is that there aren’t a lot of easy stretches. For the Lions, their easiest stretch is only two games long and it will start with a game in Week 8 against the Giants. After that, the Lions will travel to Oakland for a Week 9 game against the Raiders. Matt Patricia could be on the hot seat if he can’t beat the Raiders.

Roughest stretch: The Lions season could get off to a nightmarish start in 2019 and that’s because their roughest stretch starts in Week 2. Although the Lions will open the year with a very winnable Week 1 game in Arizona, they’ll basically be facing a gauntlet of death for the next five weeks after that. Following the Cards game, the Lions schedule goes like this: Chargers (Week 2), at Eagles (Week 3), Chiefs (Week 4), BYE (Week 5), at Packers (Week 6), Vikings (Week 7).

That stretch includes four teams that finished the 2018 season with a winning record, three teams that went to the playoffs last year and a Monday night game on the road against Green Bay. The entire stretch is a disaster waiting to happen and if Twitter is any indication. Lions fans are already preparing themselves for the pain.

Easiest stretch: The Packers could be in a perfect position to make a late season run and that’s because their easiest stretch of the year doesn’t start until mid-November. Starting in Week 10, the Packers start a five-week stretch where their schedule looks like this: At Panthers (Week 10), BYE (Week 11), at 49ers (Week 12), at Giants (Week 13), Redskins (Week 14). If Aaron Rodgers can stay healthy, that’s a stretch where the Packers could easily reel off four straight wins. Of course, if Aaron Rodgers can’t stay healthy, then you should just go ahead forget everything I just wrote, because without Rodgers, there’s no stretch of games on the Packers’ schedule that qualifies as easy.

Roughest stretch: If you haven’t circled Oct. 27 on your calendar, you should probably go ahead and do that now, and that’s because that’s the weekend we’ll be getting Aaron Rodgers vs. Patrick Mahomes. Not coincidentally, that will also kick off the Packers’ roughest stretch of the season. After traveling to Kansas City for a game in Week 8, the Packers have to follow that up with a road game against the Chargers in Week 9. There were only three teams that finished 12-4 last season and the Packers will have to face two of those teams in consecutive weeks during this stretch.

Weird scheduling note: The Packers are the only team in the NFL this season that will have to play a road game the week after playing a Monday night game on the road.  There are 17 Monday games this season and the visiting team in 16 of those games will get to play a home game the following week, with the Packers being the lone exception. After playing at Minnesota on a Monday in Week 16, the Packers have to turn around on a short week and play on the road against the Lions in Week 17.

Easiest stretch: A big reason Minnesota has the second most difficult schedule in the NFL is because the league basically decided to throw the kitchen sink at the Vikings during the second half of the season, which includes games against the Chiefs, Cowboys, Seahawks, Chargers, Packers and Bears. The upside for the Vikings is that they might be able to head into the second half of their season on a winning streak and that’s because their easiest stretch starts in Week 5. Over a four-week period, the Vikings get to play the Giants (away), Eagles, Lions (away) and Redskins. The Giants might be in the middle of a quarterback controversy. The Redskins could be starting a rookie and the Vikings have beaten the Lions three straight times. Although the Eagles game won’t be easy, Minnesota will get that one at home, which is a huge advantage.

Roughest stretch: Kirk Cousins is basically the NFC’s version of Andy Dalton, and by that, we mean he can’t win in primetime, which isn’t good news for a Vikings team that has to play three primetime games in December. The Vikings roughest stretch starts in Week 13 with a Sunday night game against the Seahawks and then goes like this: Lions (Week 14), at Chargers (Week 15 — SNF), Packers (Week 16 — MNF), Bears (Week 17). The Vikings might need multiple miracles to make it out of that stretch with anything better than a 3-2 record.

Weird scheduling note: The Vikings will play 12 games in the central time zone this season, which is tied with the Packers for the most in the NFL. Speaking of time zones, the Vikings will also be playing two games in the pacific time zone, which could be a problem, because since the NFL-AFL merger in 1970, Minnesota has never won multiple games in that time zone in the same season.

Easiest stretch: When you have the toughest schedule in the NFL, there are no easy stretches, but there are definitely a few teams the Bears defense should be able to beat up on. Since the Bears swept the Lions last season, we’re going to say their easiest stretch starts in Week 10 and ends in Week 13, a four-week period where they get to play the Lions twice. Here’s what that stretch looks like: Lions, at Rams (SNF), Giants, at Lions (Thanksgiving). The Rams could give the Bears some issues, but if the Chicago can steal that one, there’s no reason to think they won’t be able to go 4-0 during this stretch.

Roughest stretch: Someone must have forgot to tell the NFL that the Bears are celebrating their 100th anniversary this season, because the league didn’t give them much to celebrate this year. The Bears actually have two “roughest stretches” according to our formula (Their the only team that qualified for two). The first stretch starts as the Bears come out of their bye in Week 7. Over a course of three weeks, the Bears’ schedule looks like this: Saints (Week 7), Chargers (Week 8), at Eagles (Week 9). The Bears also have a brutal stretch at the end of the season, and that’s because they’ll be closing the year with the Cowboys (Week 14), Packers (Week 15 — away), Chiefs (Week 16) and Vikings (Week 17 — away).

The NFL really knows how to spoil a celebration.