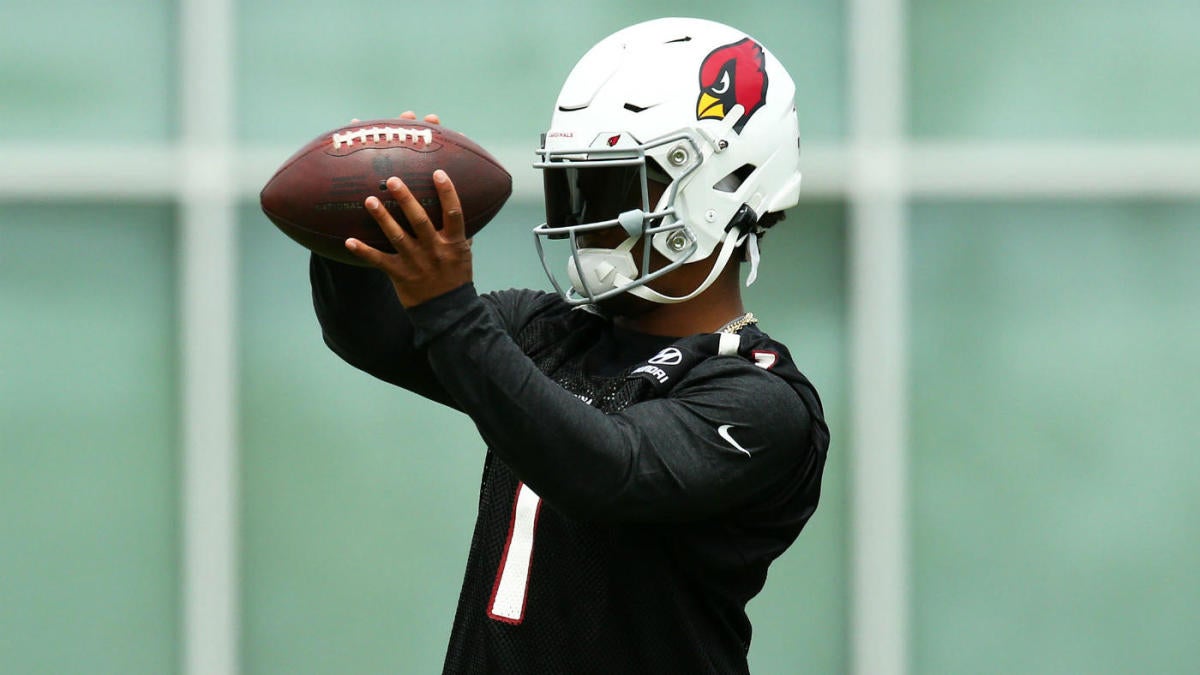 In 2018, Mayfield broke the record for the most touchdown passes by a rookie even though he didn’t play until Week 3. But, despite an incredible season that established Mayfield as one of the league’s best young quarterbacks — rather, one of the league’s best quarterbacks regardless of age — he still failed to take the Browns to the place where they haven’t been since the 2002 season: the postseason.

That’s not a knock against Mayfield, who posted a 6-7 record as a starter (7-7 after factoring in his Week 3 performance in relief of an injured Tyrod Taylor) for a team that won zero games in 2017. It just goes to show that despite how brilliant Mayfield was as a rookie, it still wasn’t enough to book a trip to the postseason. In that sense, Murray actually has a chance to surpass Mayfield’s rookie season in more than one way.

As the season rapidly approaches, let’s try to figure out how Murray can do exactly that. What does Murray have to do to take the Cardinals to the playoffs in Year 1? To answer that question, let’s look to the past.

It’s tough to give “led” a firm definition, but just know that I’m not counting rookie quarterbacks who started a playoff game after barely contributing to their team’s playoff push in the regular season. For example, I’m not including T.J. Yates, who went 2-3 as a rookie starter with the Texans in 2011, or Connor Cook, who started a playoff game for the Raiders in 2016 after failing to record a start in the regular season. That said, someone like Lamar Jackson did qualify. Although he only started seven games last season, he posted a 6-1 record in those starts after the Ravens went 4-5 in games started by Joe Flacco.

Here are the seven that fit the criteria:

Now, let’s whittle the list down from seven to two. Why two? Because two of the rookie quarterbacks above, Luck and Prescott, inherited situations that are the most similar to Murray’s situation in Arizona.

Let’s also include Mayfield on the final list. While Mayfield failed to make the playoffs last season, he did win seven games with a zero-win team. If Murray were to improve the three-win Cardinals by seven wins, they’d probably make the playoffs. The situations are also somewhat comparable. Mayfield joined a Browns team that won zero games and ranked 32nd in DVOA the season before he arrived.

That’s why we’re using those three quarterbacks as a baseline. Although all three circumstances were unique in their own ways, they’re more similar to Murray’s situation than the other successful rookie quarterbacks listed above. For instance, Wilson joined a Seahawks team in 2012 that went 7-9 and ranked 19th in DVOA in 2011. That’s not really comparable to the situation that Murray now finds himself in. That said, we’ll come back to Wilson in a bit, but for entirely different reasons.

So, the three rookie quarterback seasons that we’re going to use to establish a baseline for Murray are:

Below, you’ll see how they all performed during their rookie seasons. At the bottom, you’ll find their statistics averaged out. That’s what Murray, in theory, might be shooting for in order to reach the postseason.

Again, this is not a perfect way to create a hypothetical Murray stat line that would be good enough for the Cardinals to make the playoffs. Every situation is unique.

But it does roughly demonstrate just how good Murray is going to have to play in order to push the Cardinals to the postseason. If Murray were to complete 61.1 percent of his passes, total over 4,100 yards as a passer and a runner, score 28 touchdowns with his arm and legs, turn the ball over only once per game, and rank 12th in value per play (DVOA), that should probably be good enough to get the Cardinals into a playoff position — assuming the defense doesn’t completely nosedive. And if it isn’t good enough, then we shouldn’t blame Murray for the team’s record.

Working against the Cardinals, of course, is just how strong the NFC West is with the Rams and Seahawks as the frontrunners and the 49ers as a sleeper playoff team. It might not be enough. But at the very least, Murray is probably going to have to put up a similar stat line to the one above to get the Cardinals into playoff contention.

So, can Murray put up a similar type of stat line? It won’t be entirely up to him. Supporting casts matter. Just ask Prescott, who was joined by Ezekiel Elliott in 2016. Both rookies — not just Prescott — led the Cowboys to the playoffs that season.

There’s Johnson, who should catch a ton of passes from Murray. At the brief peak of his powers in Bruce Arians’ offense, Johnson was the most versatile running back in football. He still carries that kind of potential. He could be in store for a monster season if the Cardinals lean on him to help Murray survive behind a bad offensive line. Larry Fitzgerald will be 36 when the season begins, but he has proven to be a capable possession type of receiver in recent years. Christian Kirk is coming off a promising rookie year, when he caught 43 passes for 590 yards and three scores. The pass rush should be capable enough with Chandler Jones and Terrell Suggs. If he can stay healthy, Jordan Hicks should be a good fit in the middle of their defense.

The biggest wildcard in all of this is Kingsbury. On the bright side, Murray won’t be saddled with the ancient offense that turned Josh Rosen into the worst starting quarterback in football last year. He’s getting a coach who is supposed to be an offensive innovator, the kind of coach teams are targeting as they all search for their own version of Sean McVay. On the downside, if Kingsbury is so good, why did he go 35-40 at Texas Tech even though he had Patrick Mahomes for two full seasons? That’s a legitimate criticism.

At the very least, Murray should be operating within a modern NFL offense — an explosive offense.

“It’s putting guys in space,” Murray said earlier this month, per the Arizona Republic. “That’s what this offense does; it puts people in space. It makes defenders make decisions and like I said, I think it can be very dangerous.”

It should also make Murray’s transition to the NFL a little easier considering he might be running an offense similar to the one he ran at Oklahoma.

“I think there’s probably some truth to that, having played in a similar system for all those years,” Kingsbury said. “Christian Kirk has a good feel for it as well, I’d say. Some of the terminology and concepts are really similar to what they’ve both done before.”

Those are all positives.

Beyond that, there’s not much to like. The defense has the potential to be solid, but it’s also going to be without stud cornerback Patrick Peterson for six games. Outside of Johnson, Fitzgerald, and Kirk, the offense is missing reliable playmakers. Sure, the team drafted Andy Isabella in the second round, Hakeem Butler in the fourth round, and KeeSean Johnson in the sixth round, but history has proven that it’s usually difficult for rookie receivers to make a substantial immediate impact. As is the case with every rookie, there’s simply no way to know ahead of time which ones will succeed and which ones will fail at the next level.

And then there’s the offensive line, which is probably going to be Murray’s biggest hurdle. A year ago, it ranked 26th in pass protection according to Football Outsiders and allowed the fifth-most sacks (tied with two other teams). How many young quarterbacks have been ruined by a bad offensive line?

The good news — beyond Johnson’s pass-catching abilities, which should help Murray get rid of the ball quickly — is that Murray has the skillset to overcome bad protection. Murray is incredibly athletic, evidenced by his 1,001 rushing yards and 12 rushing touchdowns during his final season at Oklahoma.

Not only is he dangerous on designed runs, but his escapability is excellent as well. Skip to the 1:04 mark in the video below, because Murray’s scramble should remind you of a certain NFL quarterback who led his team to the playoffs in his rookie season.

While Mayfield, Luck, and Prescott’s rookie seasons are better statistical comparisons, a better comparison from a stylistic perspective is Russell Wilson. How Wilson plays is probably how Murray needs to play. Both are under 6-foot. Both are extremely mobile and athletic. Both are deadly as both a runner and a passer.

Just ask guard J.R. Sweezy, who joined the Cardinals this offseason after spending five of his first six NFL seasons blocking for Wilson in Seattle.

“I see hundreds of similarities,” Sweezy said, per ESPN. “I always say, we got to see this guy really play. I think he’s going to be just fine. But just to even be compared to Russell Wilson is a huge compliment.

That last part remains to be seen. The draft is mostly a crapshoot, which makes rookie projections pretty damn difficult. There’s no way to know for certain how Murray will fare in Year 1 and in the years beyond. So much of his development will come down to his supporting cast and his coach, adding even more unknowns to the equation.

What is clear, however, is that Murray has the skillset to succeed at the next level. He might not be as polished as Mayfield — Murray started only one year at Oklahoma — but he is more athletic. He might not see immediate success in Year 1, but even if he fails as a rookie, that doesn’t mean he’s destined to fail forever. Everyone develops at a different pace. Don’t write him off if he struggles right away.

But if Murray is to lead the Cardinals to the playoffs in 2019, he’ll need to develop at a pace similar to Mayfield, Luck, and Prescott, while looking like a younger version of Wilson out there on the field. Those might be unfair standards to place upon Murray — it’s a whole lot to ask of any rookie quarterback, no doubt — but the unfortunate reality of the NFL is that making the playoffs as a rookie quarterback is only achieved by reaching such great heights that are beyond the grasp of most rookie quarterbacks.

To take the Cardinals to the playoffs, Murray can’t play like most rookie quarterbacks. He needs to play like a select few that came before him. He’s talented enough to do it. But talent alone doesn’t automatically translate to wins in the NFL.