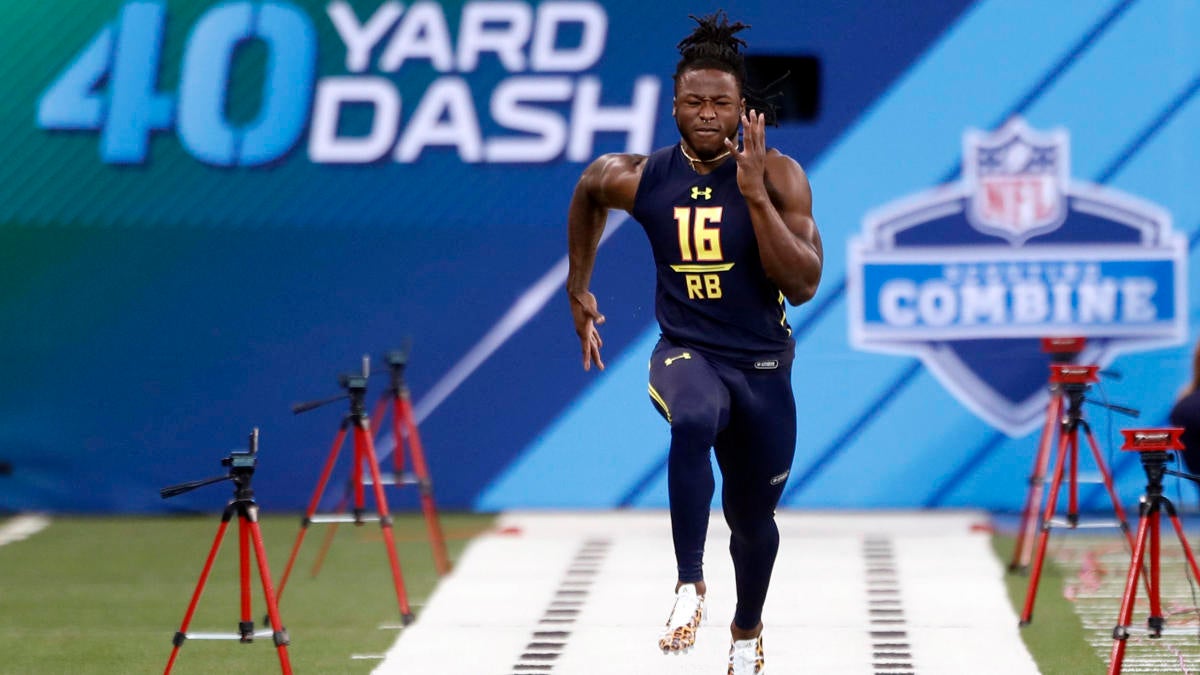 If your favorite part of draft season is watch dudes run the 40-yard dash at the combine, then you’re in luck. Sixteen of the fastest football players in the world will meet up for 40 Yards of Gold at the BB&T Center in Sunrise, Florida on Saturday to see who’s the fastest, and the winner will get to take home $1 million. The event, which is hosted by Chad Ochocinco, will begin at 7 p.m. ET, and even if you’re not local to Florida, you can watch live via pay-per-view at the event website.

Unlike at the NFL combine, these 16 players will compete one-on-one in a bracket, with one side featuring eight offensive players and the other eight defensive players. The names involved range from NFL stars like Alvin Kamara, Ted Ginn Jr., Dominique Rodgers-Cromartie and Trae Waynes, to free agents who have bounced around the league like Charles James II and Jacoby Ford.

Here are the first-round matchups for each side of the bracket:

Ginn is one of the favorites coming into the event, as most NFL fans are aware of his blazing straight-line speed. But he’s also the oldest competitor in the event at 34, and as a key member of a Super Bowl contender, you have to figure avoiding injury is the priority. Ford hasn’t played in the NFL since 2013 and was released from his CFL team a year ago. At 31, you have to wonder what kind of shape he’ll be in as opposed to Ginn, who has at least had to stay in football shape as part of offseason workouts. I’d peg Ginn in the 4.4 flat range at this point, while Ford might be a few hundreths slower.

Another matchup between NFL stars with plenty to lose should injury strike and keep them from being ready for Week 1. While Kamara, 23, is the biggest name in this event, this isn’t his type of competition, as he ran just a 4.56 40-yard dash at the combine. Anderson ran a 4.36 40 at his pro day, and we should see him in the 4.4s on Saturday. Though Kamara is considered the favorite here based on name recognition, I think Anderson has the edge.

This should be a fun one, and the winner here has a good shot of making it to the finals. Goodwin you may know is an Olympian, getting to the finals of the long jump in London in 2012. He’s also plenty fast, putting up a 4.27 40 at the combine in 2013. He battled multiple injuries last season though, so this offseason has surely been about getting healthy. Snead is a name you probably don’t know, but he attended college on a track scholarship, where he also played receiver. He hasn’t broken through on the NFL level, but he did blaze a 4.22 40 at his pro day in 2017. This is his chance to impress, and I think he posts the best first-round time on this side of the bracket.

Here we have a matchup of two young players who are incredibly fast but have yet to make a mark on the NFL level, though James did catch a touchdown in the 49ers’ final game of 2018. Badet ran a 4.27 40 at his pro day last year, and he has a chance to emerge as a deep threat for Minnesota on a wide-open depth chart behind studs Stefon Diggs and Adam Thielen. James, who is battling for slot duties in San Francisco, didn’t run that fast of a 40 at the combine but has a track background. Consider Badet the favorite in this matchup.

What a great matchup, with a pair of starting corners going head-to-head to see who’s faster. Jackson, 23, was hyped as a contender to break John Ross‘ 40 record at the combine but “only” ran a 4.32. That’s the same range as Waynes, 26, who posted a 4.31 at his combine. This should be the best matchup of the first round, with either of these guys being a tough out for anyone else in the competition. I don’t know that I can give a lean to either side.

Rodgers-Cromartie, 33, is the Ginn of the defensive side of the bracket, a long-time NFL veteran in his 30s who will be trying to keep up with the 20-year-olds in the competition. He posted a 4.33 40 a decade ago and used to run track in college, but he’s nearing the end of his NFL career. Robinson, 23, was waived by the Jets earlier this year, and while he disappointed with a 4.49 40 at the combine, he has run faster in other workouts. Considering the age disparity, Robinson should be the favorite.

Two relative unknowns meet up here, with Franklin likely on the outside looking in for a 53-man roster spot in Chicago and Sinkfield bouncing around the NFL, getting cut four times before his rookie season could even begin and latching on as a receiver in the CFL for a few years. But don’t sleep on Sinkfield here, as he clocked a 4.19 40 at his pro day back in 2013 and could end up wearing the crown by the time the competition is over. Franklin, who spent time on Chicago’s practice squad as a rookie, was hyped as a potential record breaker ahead of the combine after video surfaced of him purportedly running a 4.19 40 during a practice run, but his official mark in Indy came in at 4.32. This should be another great showdown, and I’d give the younger Franklin the slight edge.

Myrick is likely the favorite to win the entire competition. Released by the Vikings in April, he’ll likely be looking to use the event to earn another chance with an NFL team. The seventh-round pick in 2017 lasted just one year with the Jaguars, then spent parts of 2018 on Minnesota’s practice squad. He blazed a 4.28 40 at the combine. James has been out of the NFL since 2016, recently signing with an AAF team, and while he’s capable of posting in the 4.4s, he’ll likely need a misstep from Myrick to move on.

I like Jeff Badet to come out of the offensive side of the bracket, though he’s sure to face tough competition in the second round against whoever makes it out of the Marquise Goodwin-Kevin Snead matchup. On the defensive side, I think Myrick outduels either Donte Jackson or Trae Waynes in the semis, setting up a final showdown of two of the lesser-known players in the competition. As for the overall winner? My best guess is that Myrick will take home the $1 million prize.