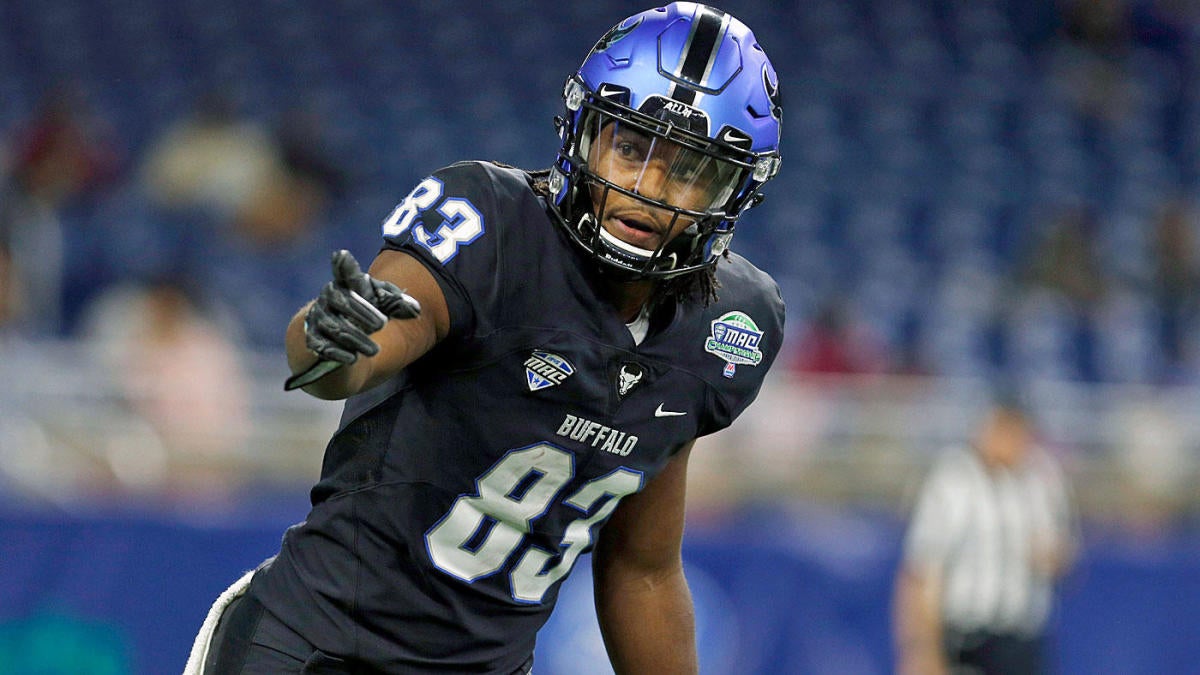 The undrafted free agent phenomenon is a huge element of the NFL, but UDFAs typically need more than just overlooked talent to emerge as quality pros.

As players who were passed over by the entire league, UDFAs start on the bottom rung of the roster and oftentimes must have reasonable opportunity to make their case in the summer of their rookie seasons.

The following five undrafted rookies have not only the skills to be relatively productive NFL players, but find themselves on teams with clear-cut openings at their respective positions.

Position ranking on my final big board: WR10

The Buffalo product — who just so happens to be Jadeveon Clowney’s cousin — went undrafted after posting back-to-back seasons of over 1,000 yards, with 25 total touchdowns, in the MAC. And those figures weren’t inflated in a totally high-flying offense. His receiving-yard market share in 2017 was a sizable 38.8% (anything above 30% is good, 40 percent is awesome) and 32% in a senior season in which he dealt with nagging injuries.

At nearly 6-foot-2 and 209 pounds, Johnson has good size but didn’t test particularly well at the combine, which likely did damage to his stock. On film, he was one of the most complete receivers in college football, a polished route runner with strong hands and plus ability to track the football deep along with running back-like slipperiness after the catch.

In Tampa Bay, Mike Evans is going to get 130-plus targets, which will account for around 20 to 25% of the team targets. Behind him, there’s not as much depth in the Buccaneers passing offense at receiver as there once was with DeSean Jackson back in Philadelphia and Adam Humphries — who saw 105 targets in 2018 — now a member of the Titans. Jackson played 45.2% of the snaps in 2018. Humphries played 70 percent of them.

Third-year receiver Chris Godwin figures to be the primary complement to Evans now. After him, there aren’t any established receivers and new head coach Bruce Arians is bound to send out many four-receiver looks. While running the show with the Cardinals in 2017, Arians used a four-receiver set on 42% of the pass plays, an incredibly high figure relative to the league average of around 6%, per SharpFootballStats.com.

Sure, tight ends O.J. Howard and Cameron Brate — essentially large wideouts — are bound to fill those spots occasionally, but there’s a gigantic opening for the Buccaneers’ No. 3 receiver job, which should be music to Johnson’s ears. He has the refined talent to carve a niche for himself in what should be a productive, pass-happy offense as a rookie.

Position ranking on my final big board: RB9

No joke here, Holyfield went into the combine as my RB2 behind Devin Singletary. Then the Bulldogs standout had an epically poor performance in Indy which preceded a nearly equally as ghastly effort at his pro day. Hence his sink in my rankings.

However, on the field, Holyfield looked as nimble and balanced as any of the top backs in the 2019 class, so I couldn’t totally quit him altogether. I had the same “trust the tape” feeling with Oklahoma offensive tackle Orlando Brown in 2018, and after his unfortunate combine, he had an effective rookie season in Baltimore.

After going undrafted, which seemed likely following his flop of a pre-draft process, I love the situation in which Holyfield landed with the Panthers. Yes, behind high-volume back Christian McCaffrey.

McCaffrey was on the field for a gargantuan 91.3% of Carolina’s offensive snaps last season. The next-highest snap percentage among Panthers’ backs? Alex Armah at 10.8%. Carolina picked Florida runner Jordan Scarlett in the fifth round, and the only veteran competition Holyfield has in the backfield is 2015 fifth-round pick Cameron Artis-Payne, who played 4.5% of the snaps last year.

Of course, I fully expect the share of rushing attempts to be significantly in McCaffrey’s favor, but with new, reliable center Matt Paradis, second-round offensive tackle Greg Little, and the return of former right tackle All-Pro Daryl Williams, Carolina is much more equipped to run the football in 2019 than it was a season ago.

Holyfield has the ball-carrying instincts, light feet, and plus contact balance to be a low-volume, somewhat highly efficient complement to McCaffrey as a rookie.

Position ranking on my final big board: WR16

Morgan’s 2018 season at Nebraska is a fine example of why we should be using receiving-yard market share instead of raw statistics. The senior had 1,004 receiving yards. OK. Pretty good. But as a team, the Huskers only threw for 2,966 yards, meaning Morgan accounted for 33.8% of those yards through the air. For context, Marquise Brown, the first wideout picked in the 2019 Draft, had a team receiving-yard market share figure of 29.1%.

I’m not entirely sure why Morgan went undrafted either. He checked the production box. And his combine was solid across the board.

On film, I saw a tenacious wideout in Morgan. He routinely sold out to nab inaccurate throws, bounced off tacklers in space with the ball in his hands, and showed the ability to snag difficult passes downfield.

And even with Green and Boyd locked into the WR1 and WR2 roles, new head coach Zach Taylor, a branch of the Sean McVay tree — impressive feat to have a coaching tree at 33 years old — is likely looking for a quality WR3 to be featured relatively often. Last season the Rams — with Taylor as quarterbacks coach — utilized a three-receiver, one-back, one-tight end look on an otherworldly 89% of their offensive plays. The league average was 65%, per SharpFootballStats.com.

The opportunity is undeniably there for Morgan. He has the aggressive, well-rounded game to get plenty of looks and produce as Cincinnati’s WR3 as a rookie.

Position ranking on my final big board: CB15

In terms of players with NFL experience, the Chiefs’ cornerback room currently consists of Kendall Fuller, Charvarius Ward, Bashaud Breeland, Keith Reaser, and Tremon Smith. Goodness. To put it kindly, it’s not a group of superstars.

Breeland had some quality stretches early in his career but has been wildly inconsistent and is now on his third team in two years.  Fuller is young and serviceable. The rest have been fringe roster players. Last season, Ward played 11.8% of Kansas City’s defensive snaps. Smith played 6.2% of them.

Fields and his agent choose the right team after going undrafted.

In four years at Clemson, Fields never emerged as a full-time starter yet was put on the draft community radar after a very strong College Football Playoff that was likely the catalyst for his Senior Bowl invite despite the career part-time gig with the Tigers.

Fields is a no-hesitation, high-risk, high-reward cornerback. He bites on double moves but also has the fast mental processing, twitchiness and ball skills to get his hands on the football on short-to-intermediate routes. Fields had five pass breakups in just seven games as a senior.

Fields might have to scale back some of his aggressive nature to not routinely allow the big play. But he has the body type, high-end athleticism, and ball skills to stick on a Chiefs roster in desperate need of game-altering skills from its cornerbacks.

Position ranking on my final big board: S11

Wingard had a rare college career. At Wyoming, as a freshman who turned 19 during the season, he loaded the stat sheet with 122 tackles, seven tackles for loss, a pick, and two pass breakups.

Then Wingard had 131 tackles as a sophomore and 114 as a junior while snagging seven more interceptions, making 15.5 tackles for loss, and deflecting five more passes.

His senior year was less productive than his first three — 87 tackles, two picks, 2.5 tackles for loss — but any time you flipped on Wyoming’s defensive film, Wingard would pop. He was everywhere.

At the combine, he tested as a slightly below-average athlete for the NFL safety spot and is certainly more impactful closer to the line of scrimmage than flowing in zone coverage or running with receivers in man.

But his brilliant football instincts, tackling reliability, and at times flashy explosiveness make him a football player who repeatedly overachieves. And, he’s on a roster devoid of any type of playmaker at the safety position.

The Jaguars picked Ronnie Harrison from Alabama in the third round of last year’s draft, and he barely made an impact as a 21-year-old rookie on 32% of the defensive snaps. He had 32 tackles, one interception, and three pass breakups. Due to his age and their investment in him, the Jags are likely to roll with him as the starting strong safety in Year 2. Harrison has potential.

Beyond him, these are the remaining names in the Jaguars’ safety contingent: Jarrod Wilson, C.J. Reavis, Cody Davis, Zedrick Woods, and Joshua Moon. They’ve combined to play 232 defensive snaps in the NFL, and 222 of those came from Wilson in his rookie year of 2018.

Clearly, Wingard has ample opportunity to make waves at the safety spot in Jacksonville, and I wouldn’t be shocked if he has a productive preseason en route to earning a roster spot, then makes positive contributions to the Jaguars during the regular season in 2019.