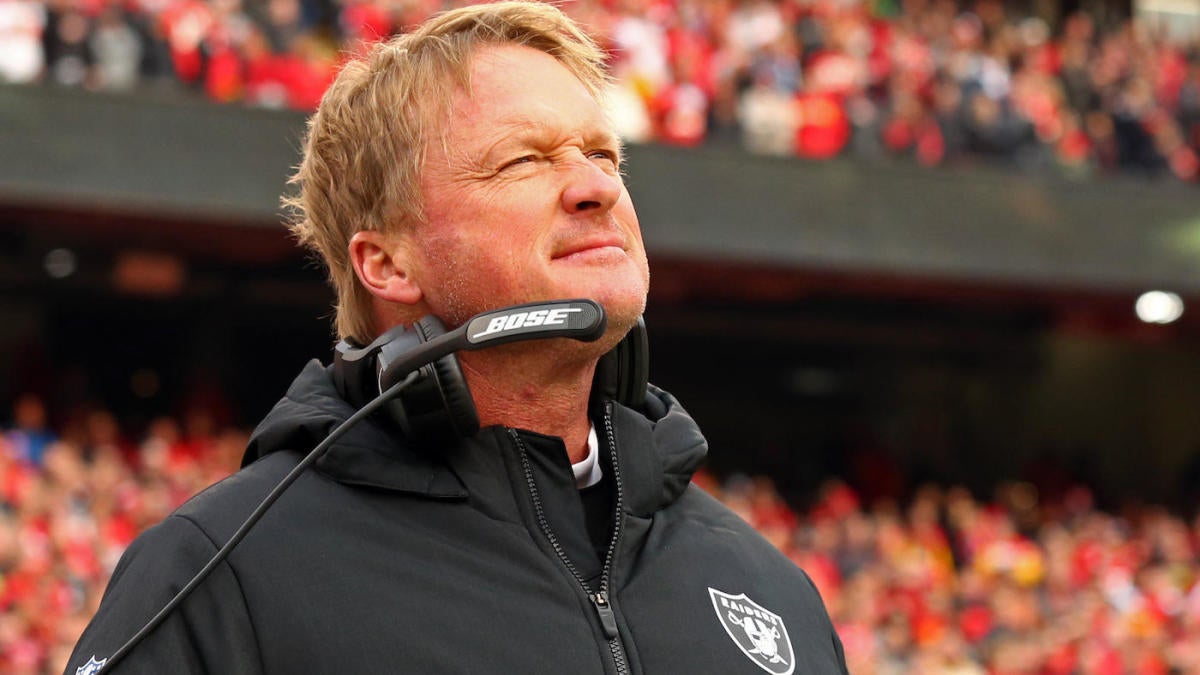 In 11 NFL seasons from 1998-2008 Jon Gruden went 95-81 with the Raiders and Buccaneers, made five postseason appearances, and won the Lombardi Trophy in 2002, his first year in Tampa Bay. During that stretch had just three losing seasons and reached at least 10 wins on four occasions.

Simply put, Gruden was one of the best coaches of his generation. Still, he was fired after the ’08 season when the Bucs lost four straight to finish 9-7 and miss the playoffs. Tampa Bay has had just two winning seasons in the decade since and have yet to return to the playoffs.

Gruden bided his time in the broadcast booth, joining ESPN as the color commentator for Monday Night Football where he served from 2009-17, and in January, days after his last game, he was named the new coach of the Oakland Raiders and would earn roughly $100 million over 10 years.

Gruden replaced Jack Del Rio, who went 25-23 — including a 12-4 record in 2016 — in three seasons, and Del Rio did it on the heels of a 12-year spell in which Oakland never once sported a winning record (in fact, the team won four or fewer games seven times during that span). But Raiders owner Mark Davis has long been infatuated with Gruden and he finally got his guy. But 18 months into Gruden’s second stint — and six months since the Raiders finished 4-12 in his return — it remains unclear whether he’s is an upgrade over Del Rio.

For starters, Gruden last coached in the NFL in 2008 and the NFL has changed drastically over the last 10 years — in terms of schematics, scouting, and roster building, for starters — all while Gruden has been in the broadcast booth. There’s also the argument that Gruden will generate excitement around the organization ahead of its relocation to Las Vegas, and having Gruden on the sidelines will all but guarantee fans in the seats. You know what else fills stadiums? Winning. Which Del Rio did in three years after his six successors had no luck in the 12 years before. Again, we point you to the four wins the Raiders mustered in 2018.

There’s also this: History suggests that Gruden’s return will be anything but smooth. Here’s a tweet from NFL Research published around the time Gruden was hired.

Pete Carroll is the gold standard — he also coached in college during his time away from the NFL. Chan Gailey, Art Shell and Joe Gibbs all, to varying degrees struggled. And you could make the case that Dick Vermeil’s success was tied to the franchise quarterback he didn’t even know he had: Kurt Warner.

Which brings us back to Gruden. Prior to the ’18 season, his defenders could have pointed out out that in Oakland he’d have something he never did in Tampa Bay: A franchise quarterback. Yes, Derek Carr was coming off a disappointing ’17 season but he was a legit MVP candidate in 2016.

(It seems like eons ago but in ’16 Carr threw for 3,937 yards with 28 touchdowns and just six interceptions; he suffered a broken leg in Week 16 and the Raiders’ playoff chances were immediately doomed. Still, Carr finished the season ranked sixth in value per play and seventh in total value among all quarterbacks, according to Football Outsiders.)

In seven seasons in Tampa, Gruden had a .509 winning percentage with Brad Johnson, Brian Griese, Chris Simms, Jeff Garcia, Luke McCown and Bruce Gradkowski under center. So if Gruden can win with those guys, certainly he can win with Carr, right?

The 2018 season told a different story; while Carr completed 68.9 percent of his throws and totaled 4,049 passing yards — both career bests — he ranked 22nd in value per play, behind Ryan Fitzpatrick, Jameis Winson, Joe Flacco and Andy Dalton, and was sacked a whopping 51 times.

So the Raiders spent the offseason surrounding Carr with a revamped roster that leaves little room for excuses for both the quarterback and the coach. It starts with Antonio Brown, whom the Raiders traded for in March, but the team also added Tyrell Williams, Ryan Grant and J.J. Nelson in free agency and drafted Hunter Renfrow on Day 3.

The plan: Bolster a pass-catching corps that didn’t include a 1,000-yard receiver a season ago, even if that means letting your best player, tight end Jared Cook and his team-leading 896 receiving yards, walk out the door. Also gone: Jordy Nelson and Seth Roberts. That trio accounted for 176 receptions — or 46 percent of the Raiders’ total. It’s reasonable to expect Oakland’s offense to exceed that total next season and to feature at least one 1,000-yard receiver.

And while the passing game was replacement level a year ago the running game was among the worst in the league, ranking 29th, ahead of only the Jets, Cardinals and 49ers. To remedy that situation, the Raiders used their second first-round pick on Josh Jacobs, the best back in the 2019 NFL Draft class, added Isaiah Crowell in free agency and placed a second-round tender on Jalen Richard, who only had three rushing attempts last season but caught 45 passes for 494 yards. Free agency was about adding playmakers, depth and versatility and it was mission accomplished at the skill positions.

Returning to those 51 sacks that Carr suffered, Oakland also had some issues to address along the offensive line. It’s why they signed tackle Trent Brown to a four-year, $66 million deal. The team also added 35-year-old interior lineman Richie Incognito, who had multiple off-field issues and arrests during his career and didn’t play during the ’18 season.

In May, first-year general manager Mike Mayock — weeks after he stressed the importance of bringing high-character players to Oakland — defended the decision to sign Incognito.

“Three years in a row he was a Pro Bowler in Buffalo in ’15, ’16, and ’17,” Mayock said, via USAToday.com. “I think whenever he has been focused on activities solely on the field, he has been fine. We’ve done a one-year, prove-it deal with him. Prove it means both on and off the field. There are some expectations he’s got to meet in both areas. He turns 36 this July, and we think he’s going to be a pretty good football player and allow himself to compete for the left guard job. And just as importantly, he’s got to prove it off the field.”

Which brings us to arguably Gruden’s most important role, even beyond the X’s and O’s: Managing a locker room full of personalities, from Antonio Brown, who forced his way out of Pittsburgh to Incognito to Vontaze Burfict, who was fined or suspended by the league 13 times during his seven years in Cincinnati. The grand total, according to USAToday.com: 10 games and roughly $4.12 million.

But the non-football-related stuff doesn’t seem to concern the Raiders. We heard Mayock’s perspective on bringing in Incognito and Gruden appears to be all-in on Burfict:

And Gruden and Brown are still in the honeymoon phase of their relationship.

Simply put: Gruden desperately wants to win and a few locker room personalities won’t deter him from goal of returning the Raiders to the form they enjoyed when he coached the team the first time around 20 years ago. In four seasons, from 1998-2001, Oakland went 38-26 and made the playoffs twice. In the 17 years since, the Raiders exactly two winning campaigns. But the biggest question remains: After a decade away from coaching is Gruden the best choice to save the Raiders?