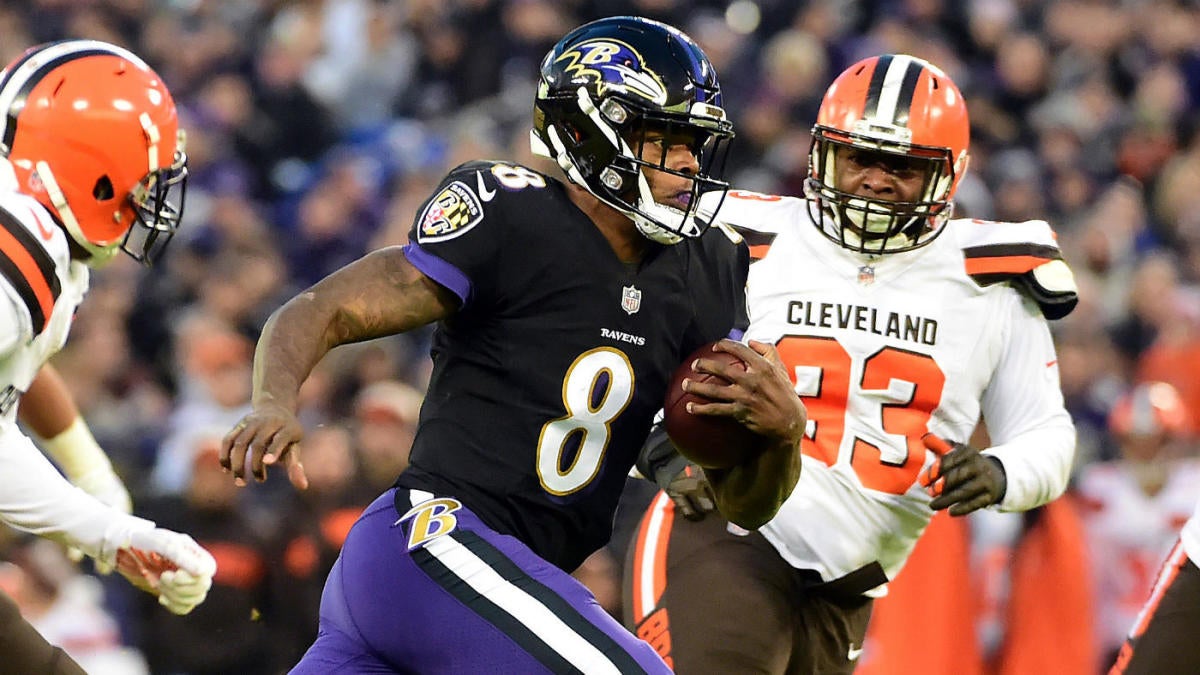 We knew the second the Baltimore Ravens traded up to draft Lamar Jackson at the end of the 2018 first round that they were eventually going to dramatically remake their offense to accentuate his skill set. It took the Ravens 10 weeks to elevate him to the starting lineup, but once they did, they underwent one of the most dramatic in-season shifts in strategy that you’ll ever see.

Baltimore threw the ball on 64 percent of its snaps when Joe Flacco was the starter, and ran the ball on 36 percent of its snaps. From Week 11 on, with Jackson as the starter, those numbers were flipped: the Ravens ran the ball 64 percent of the time, compared to a league average of just 42 percent during those weeks, per Sharp Football Stats. Jackson threw 158 passes in his seven starts — an average of 22.6 per game. That’s far less than the 34.5 per game the average NFL team threw during the regular season. Jackson also carried the ball 119 times during those seven starts — 18 more carries than any other NFL quarterback had all season.

For the most part, that style of offense worked for Baltimore. The Ravens went 6-1 in Jackson’s seven starts, with the only loss coming to the Chiefs, who finished tied for the second-best record in the NFL. But once the playoffs rolled around, the Ravens got a rude awakening. Jackson struggled badly as a passer — and was sacked seven times — against the Chargers, and Baltimore was sent home after the first round.

With an offseason to regroup, the Ravens remain committed to building their offense around Jackson. Though they will perhaps not lean quite as much into the running game as they did a year ago, it still seems incredibly likely that the Ravens will rank among the run-heaviest teams in the league. Given the efficiency gap between runs and passes, there is reason to question whether that’s a viable strategy in 2019. The posit here is that it can be, but only under certain conditions.

First, the Ravens have to maintain their elite defense. In the pass-happy and score-first NFL, running the ball as much as the Ravens seemingly want to only works if your defense keeps points off the board so your offense can concentrate on grinding clock and slowly accumulating yardage rather than having to make comebacks. Last year’s Ravens defense led the NFL in yards allowed per game, finished second in points allowed per game, and ranked third in defensive efficiency, per Football Outsiders’ DVOA. Baltimore saw Za’Darius Smith, C.J. Mosley, Eric Weddle, Terrell Suggs, and Brent Urban leave in free agency, but also added Earl Thomas, Shane Ray, Pernell McPhee, and rookie Jaylon Ferguson. Being able to stave off any backslide will be incredibly important.

Similarly, the Ravens will have to maintain or even elevate the rate of explosive runs they attained once Jackson entered the starting lineup. Marching the ball down the field with long drives of 10 plays or more is difficult, and not a sustainable strategy for being a quality offense. You have to be able to create big plays as well. Baltimore was able to do that on the ground last year, thanks in large part to Jackson’s presence.

As we wrote prior to their playoff loss to the Chargers:

Excluding runs by Jackson himself, Baltimore had just five rushes of 15 yards or more while Flacco was the starter. That’s five out of 178 non-Jackson carries, a rate of only 2.80 percent. Since Jackson took over, three different players have more than five rushes of 15 yards or more. (Jackson has eight, Gus Edwards nine, and Kenneth Dixon six.) The Ravens as a team have 24 such runs, on 316 carries. That’s a rate of 7.59 percent, a massive leap from where they were with Flacco under center.

If you take out Jackson’s rush attempts, the rate is even higher, as 16 of 197 carries by Baltimore running backs since Week 11 have gained 15 yards or more. That’s a rate of 8.12 percent, nearly three times as high as their 2.80 percent rate prior to Jackson’s ascension to the starting lineup.

The Ravens seemingly recognized the need for these types of runs and added a variety of playmakers to their stable this offseason. Mark Ingram was signed away from the Saints in free agency to be their downhill runner. Justice Hill was drafted out of Oklahoma State to provide a versatile complement. Marquise Brown was tabbed out of Oklahoma to be a speedster on the outside and presumably on reverses and jet sweeps and the like. And they still have Edwards and Dixon in tow, as well as two additional running threats backing up Jackson in Robert Griffin III and rookie Trace McSorley.

Using motion and misdirection will be key to keeping defenses off balance if they know a run is coming more often than not. You can’t just let them pin their ears back and come aggressively at every ball-carries. There should be a whole lot of motion, a whole lot of fakes, a whole lot of looks with multiple potential ball-carriers on the field at the same time. If they can cross paths and each make it look like they can have the ball, so as to distract the defense, that’s all the better.

Experimenting with different formations will be necessary as well. This is not a team that will be able to line up in 11 personnel on every snap and make things look exactly the same until the moment they’re different, like last year’s Rams. They’ll have to get creative by varying up looks on a near every-snap basis, taking defenses from heavy to light formations and back again in quick succession. They might want to put multiple backs on the field at once, or none at all. They have three tight ends they could use in any of several combinations. They could even get Griffin and/or McSorley out there with Jackson, if they want. No idea should be considered too bold or too weird.

Of course, being able to do any or all of this is largely dependent on high-level offensive line play. The Ravens have had one of the best run-blocking units in the league for a while now, and last year was no different.

The Ravens ranked ninth in the NFL this season in Football Outsiders’ Adjusted Line Yards, which assigns credit to the offensive line in the run game based on a percentage of yards gained. Perhaps more indicative of the offensive line’s success is the team’s stuff rate, which measures the percentage of their rush attempts that were stopped at or behind the line of scrimmage. Baltimore excelled here, getting stuffed on just 14.6 percent of rush attempts, the third-lowest rate in the league.

Since Jackson took over, the rate was even lower. Excluding Jackson’s 14 kneel-downs, the Ravens had only 24 runs that were stopped either at or behind the line of scrimmage. Out of 302 non-kneel running plays, that’s a truly remarkable rate of only 7.9 percent.

Such rates will need to be maintained or improved throughout the 2019 season, because if they’re not, Baltimore will wind up in far too many third-and-long situations, where running is often a non-starter strategy. And that brings us to the final piece of the puzzle.

The Ravens have to feel comfortable that Jackson can let it rip and make plays on third downs, because there are going to be a whole lot of them if they maintain such a high run rate. They also have to let him take shots downfield fairly often, because you have to figure out a way to make safeties respect an area of the field more than 8 or 10 yards beyond the line of scrimmage. And they have to have confidence that Jackson will be able to maintain his strong passing numbers when the Ravens are trailing and in need of moving the ball very quickly.

Jackson was able to do those things pretty well during his rookie season, but the league was less prepared for both his style of play and the Ravens’ style of offense than it presumably will be this season. Asking a quarterback to make most of his plays in the least advantageous situations is a tall order, but if Baltimore wants to commit to a run-heavy attack, it will be a necessary one.