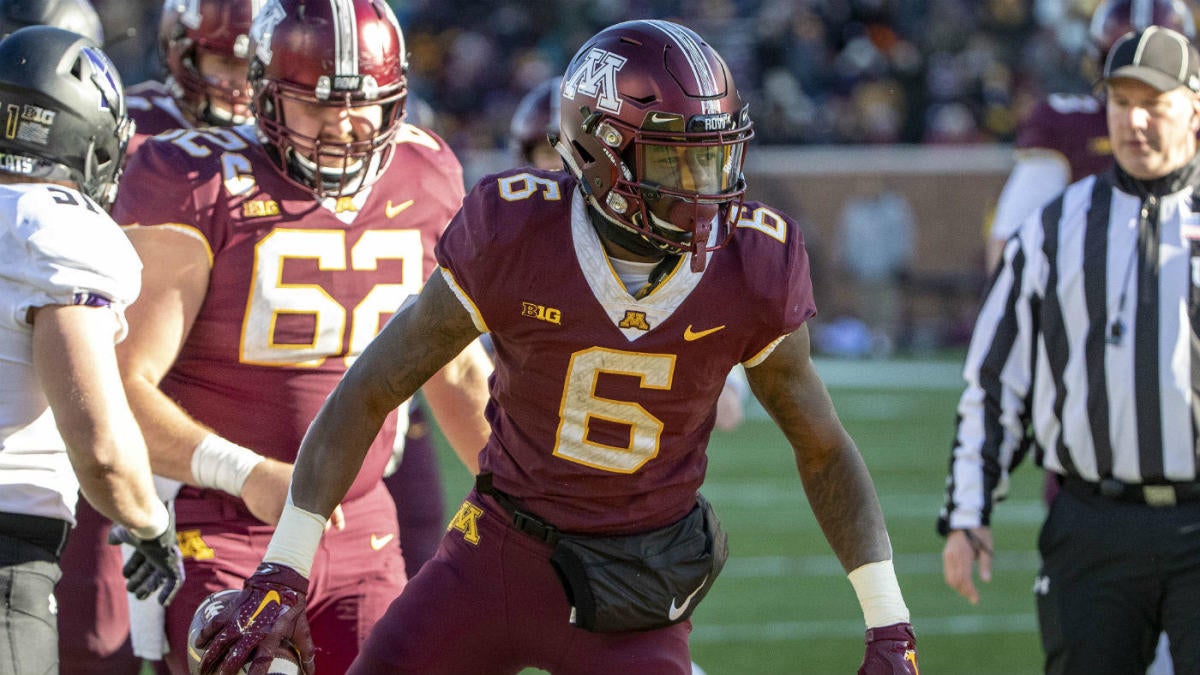 A year from now, there’s a good chance we’ll all realize the Chicago Bears need another high-quality outside rusher to pair with Khalil Mack, and that the Green Bay Packers need more receiving help for Aaron Rodgers.

Today we examine the NFC North.

Reagor had a hefty 38.6% receiving-yard market share in 2018 — significantly higher than big-name sophomore pass catchers Jerry Jeudy and CeeDee Lamb — and did so as a 19 year old.

He even led TCU in receiving with 575 yards as an 18-year-old freshman in 2017 while averaging 17.5 yards per grab with eight touchdowns.

Reagor is exceptionally explosive on the field. He separates at all levels and racks up yards after the catch with ease. Also, quite impressively for being a sub 6-0 receiver, Reagor proved to be reliable in contested-catch situations last season. His leaping ability helps him a great deal in that area.

More so than anything else, you do not want to see Reagor in space if you’re a defensive back. Check this ridiculous play against Baylor in which his athleticism, vision, balance, and speed were on full display:

With Marques Valdez-Scantling, Equanimeous St. Brown and J’Mon Moore, the Packers have three second-year pros they grabbed in the middle to back end of the 2018 Draft who are all raw, size/speed specimens. While Scantling and St. Brown flashed as rookies, Scantling finished the season with only 38 receptions despite playing 64.3% of the snaps. St. Brown caught 21 passes.

With Randall Cobb gone, and Geromino Allison set to hit free agency in 2020, even if MVS becomes a trustworthy No. 2 to Davante Adams, the Packers will need another quality receiver for the twilight of Rodgers’ career.

In his freshman and sophomore seasons combined, Weaver has amassed 20.5 sacks and 28 tackles for loss across 26 games for Boise State. At 6-foot-3 and 266 pounds, he already has NFL edge rusher size and looks to be plenty long.

Weaver routinely wins with burst and long strides that cover a lot of ground in a hurry as he gets to the corner. He’s capable of flattening to the quarterback too, a requisite skill for any edge rusher to be successful in the pros.

Check his get-off and bend on this pressure against Colorado State last season. He’s at the bottom of the defensive line wearing No. 99:

The Bears don’t have a first-round pick in 2020 but do have two second-round selections, and simply need to add someone to the roster who’ll take some attention away from Mack at the outside linebacker position.

Chicago did finish fifth in defensive pressure rate last season (37.7%), but Mack and defensive lineman Akiem Hicks were the main pass-rushing contributors. Aaron Lynch could produce well this year, yet the Bears gave him a one-year deal. After him, the depth at the position in Chicago is extremely thin.

Weaver could be available in the second round and he has the size, length, and athleticism to stand up opposite Mack and generate decently consistent pressure on the quarterback.

Thomas is a monster. Flat out. His blend of overpowering strength and effortless movement in any direction make him essentially unbeatable on the left side on pass plays and a heat-seeking bulldozer for Georgia’s ground game.

Watch his outing in 2018 against Kentucky and 2019 top-10 pick Josh Allen. Thomas dominated. Note how he matched Allen’s quickness and mirrored him perfectly on this completion in that game. Thomas and Allen are at the top of the defensive line:

While the Bulldogs deploy a lot of power plays in their rushing attack, Thomas’ overall athletic talent theoretically is a fit for the zone-blocking scheme the Vikings are installing this season and presumably will use in 2020.

Riley Reiff has essentially been a free-agent bust at left tackle for Minnesota, and while he’s signed through 2021, if released after the 2019 campaign he’d give the Vikings $8.8M in cap relief with a dead cap hit of $4.4M.

Minnesota should be one of the better teams in the NFC, so its coaching staff should be ecstatic if Thomas happens to be available when the Vikings go on the clock. They need to upgrade the left tackle spot in the worst way.

While not (yet) a household name in the same vein as Jerry Jeudy, CeeDee Lamb or Laviska Shenault, Johnson was legitimately one of the most productive receivers in all of college football in 2018. He accounted for a stupidly high 43 percent of Minnesota’s receiving yards. Of all wideouts picked in the 2019 NFL Draft, only Andy Isabella had a higher receiving market share figure than Johnson.

Impressive for a pass catcher who turned 20 just before the start of the season.

At 6-2 and 200 pounds, Johnson has good size to play on the outside but is athletic enough to be productive from the slot. He’s not a specialist in any way. Just super polished.

Johnson wins down the field with speed and/or contested-catch ability, and he’s a menace after the catch. Here’s a catch-and-run touchdown he made look easy against New Mexico State last season:

Newly signed receivers Danny Amendola and Jermaine Kearse are playing in Detroit on one-year deals, and Marvin Jones, who’ll be 30 in 2020, would represent $6.5M in savings if cut with only $2.6M dead cap.

The Lions are seemingly set on becoming a run-heavy club under head coach Matt Patricia and offensive coordinator Darrell Bevell, but Matthew Stafford can’t realistically be cut until 2021 and anyone potentially resembling his heir apparent is not currently on the roster.

Kenny Golladay looks like a star and has serious size to man one of the perimeter wideout positions. He’s set for free agency after 2020 but is in line for a lucrative extension. He needs a running mate for the prime of his career. Johnson would be a perfect complement.