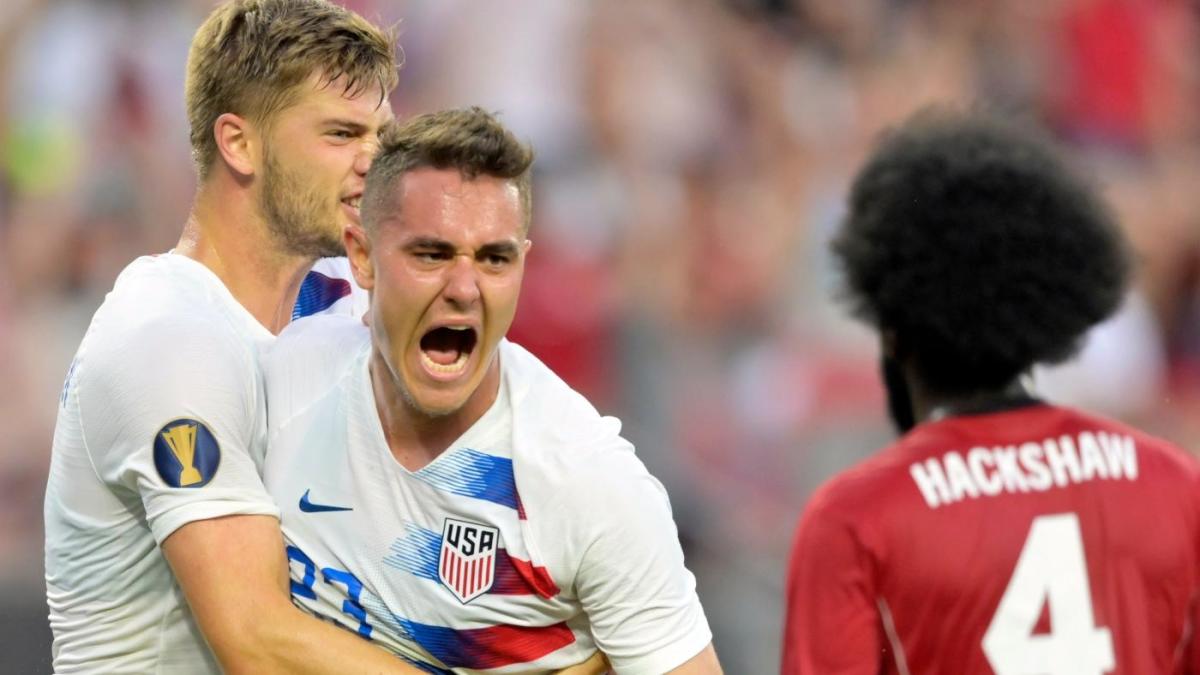 After entering the Gold Cup with plenty of doubters following ugly losses to Jamaica and Venezuela, the United States men’s national team is starting to get some of those doubters to believe. After opening up with a 4-0 win over Guyana, the U.S. dazzled in the second half against Trinidad and Tobago on Saturday, scoring five times in a 6-0 win to clinch a spot in the quarterfinals. Gyasi Zardes scored twice, as did Aaron Long, Christian Pulisic dazzled and the U.S. made a statement against the team that kept it out of the 2018 World Cup. Pulisic scored and Paul Arriola found the net again in the comfortable victory. Here are three takeaways from the match:

The Pulisic-McKennie midfield is special

I’m not overstating this by any means, and we all know Pulisic is the top young player in U.S. Soccer, but Weston McKennie isn’t far behind. And together, they are fantastic for the future. We got a glimpse of what that future could look like in this one with them both playing in the midfield close to each other. Off the field, McKennie and Pulisic are super close, and they’ve known each other for years. That off-the-field relationship carries onto the field with just a fantastic understanding of how to play together. Often times it only takes one touch for McKennie to set up Pulisic towards goal and it’s refreshing to see.

Just check this opening goal from Long 41 minutes in, which Pulisic assisted. After failing to execute on a free kick, Michael Bradley plays McKennie, and he, in just a fraction of a second and with a defender closing in, takes one touch right to Pulisic. It’s impressive because it shows that understanding of where the other is, and it worked out with Pulisic delivering a great ball. Take a look:

That has to get you excited. So much potential.

Zardes, Arriola stating their cases to continue as starters

Zardes and Arriola, on paper, are likely key substitutes for this squad. But for a variety of reasons, including injuries, they’ve gotten the chance to start and have delivered time and time again, making it hard for Gregg Berhalter to not continue starting them. Perhaps Jozy Altidore is the better player, and we’ve seen Pulisic on the left, but their effort and scoring means they have to stay in. Zardes’ movement has been great and is a menace to defend. He took his second goal so well off the assist from Pulisic. Take a look:

Arriola works as hard as anybody, and his unselfishness and passing into space is so key when it comes to create chances, aside from the ones he creates on their own. Combined, they’ve got five goals in the past two games, and you can’t deny those results.

Defense in midfield was improved

I loved what I saw defensively in the midfield, especially towards the sidelines. You saw Bradley helping close down but first taking a peek to make sure he wasn’t leaving a man unmarked. We saw McKennie with some really well-timed tackles to thwart potential chances for the Soca Warriors. Time and time again the U.S. did what it needed to do in the middle, and it’s refreshing to see.