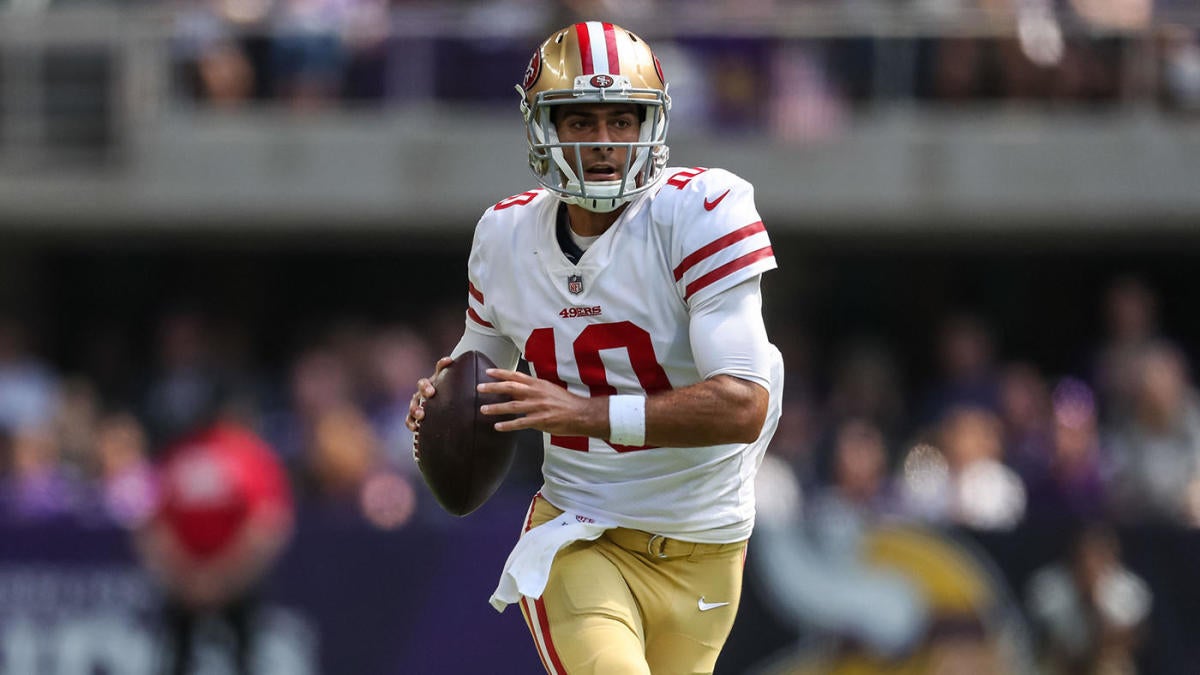 Jimmy Garoppolo has a compelling case as the NFL’s most enigmatic quarterback, a clearly skilled passer who has mostly looked bound for superstardom when on the field but has never played more than five consecutive games in the NFL.

Last year, thanks to a somewhat unprecedented accounting decision by the loaded-with-cap-space 49ers, Jimmy G had the league’s highest cap hit at $37 million, but he appeared in only three games before tearing his ACL.

At the time of his injury, Garoppolo had completed 59.6 percent of his passes for the 49ers with five touchdowns, three picks, a hefty 8.1 yards-per-attempt average and a middle-of-the-roadish 90.0 quarterback rating.

For as gaudy as Jimmy G’s five-year, $137.5M contract with San Fran initially appeared — and in terms of total money, it still ranks as the third-biggest deal for a quarterback in NFL history — the 49ers actually gave him just $48.7M guaranteed at signing, the eighth-highest at the position. Slightly more reasonable.

Why does that number matter more than the total, you ask? Because “guaranteed at signing” is the true core of every NFL contract. To me, it’s the figure that should be mentioned most in analysis. It’s the money a team absolutely must pay a player. It’s not inflated by future team options — which frequently get turned down and amount to zero for the player — or salaries only guaranteed if and when a player is on the roster four or five years after the ink dries on the signed contract.

While the significant and polarizing trade between the Patriots and 49ers seems like it went down not too long ago, 2019 will actually be the third season Garoppolo has been with San Fran, although we’ve seen him in uniform for Kyle Shanahan for a mere eight outings.

What happened in those eight outings? You’re aware of the buzz-creating five-game winning streak to end 2017. In that stretch he was an ultra-efficient passer (67.4 percent completion rate, 8.8 yards per attempt) but needed to protect the ball better (five interceptions). How good were his numbers overall? A Total QBR of 80.7 may mean essentially nothing to you on the surface, but when Patrick Mahomes logged an 82.0 in the same statistic during his MVP season in 2018, you know Garoppolo was playing at an extremely high level.

Sure, that five-game run represents a small sample size, and while his efficiency took a dip the following year, the sample size was even smaller, with Garoppolo playing just three games while completing less than 60 percent of his passes at 8.1 yards per attempt.

Now, with a clean bill of health, what does Jimmy G need to do to justify the enormous contract he was given after the trade to the 49ers?

The straight-forward, non-specific answer is: Be a really good quarterback. Let’s dive deeper.

As a signal-caller in the top 10 of basically every measurable financial category, I’d say it’s reasonable to expect him to at least meet or exceed the statistics of his high-paid contemporaries inside the top 10 to live up to the money he’s making.

The nine quarterbacks outside of Garoppolo who make up the top 10 in guaranteed-at-signing dollars are Matt Ryan, Kirk Cousins, Aaron Rodgers, Russell Wilson, Carson Wentz, Matthew Stafford, Alex Smith, Andrew Luck and Nick Foles. Here are their combined averages from 2018, a good bar for which San Fran should expect Garoppolo to aim:

Pretty close but no cigar essentially across the board for Garoppolo in his first two years, except for yards per attempt, the vital efficiency metric for quarterbacks.

Based on the amount of passes he’s thrown per game in his eight 49ers contests, this is what a full, 16-game season for Garoppolo would look like if he hit the top 10 averages above:

Those are relatively modest figures in today’s NFL, right? And remember, in a small sample size, he’s proven to be capable of exceeding the top 10 average in yards per attempt by more than a full yard. Even if he regresses from that big 8.5 yards-per-attempt number, his total yards would be only 3,800, and 15 quarterbacks passed for more yards than that in 2018.

Essentially, based on what we’ve already seen from Garoppolo during his time in San Francisco, he wouldn’t have to be drastically better to validate his large contract.

Can he actually be even marginally better than he’s been in Shanahan’s offense?

To get a grasp of Shanahan’s impact on other quarterbacks after multiple years in his offense, I grabbed the statistics of three other signal-callers who spent at least two straight seasons with Shanahan as the offensive coordinator to get what I’m calling a “Shanahan Average.”

Fortunately, the three quarterbacks — Matt Schaub, Robert Griffin III, and Matt Ryan — in this micro study represent a sensible range of outcomes for the quality of quarterback Jimmy G is likely to become.

Here’s their collective average stat line after running Shanahan’s offense for two seasons. For comparison sake, the second row is the top 10 averages from the first chart, which Garoppolo should be trying to hit:

Decently close to being identical.

All these numbers indicate Garoppolo should be able to make a jump in San Francisco in 2019 under Shanahan that brings him on the cusp of the quarterbacks within the top 10 in most guaranteed-at-signing dollars, thereby legitimizing himself as a passer worth the money the 49ers are paying him.

And it’s not as if San Francisco hasn’t built around Garoppolo. Center Weston Richburg was given a lucrative contract during 2018’s free-agency period. Skilled, pass-catching running backs Jerick McKinnon and Tevin Coleman were added in free agency the past two offseasons. Polished offensive tackle Mike McGlinchey was drafted in the top 10 of the 2018 draft. Slippery receiver Dante Pettis was picked in Round 2. Crafty, yards-after-the-catch specialist Deebo Samuel was selected in the second round of the 2019 draft.

And as a way to keep the team balanced, San Francisco also invested heavily in the defense, with Nick Bosa drafted at No. 2 overall in April, rangy linebacker Kwon Alexander picked up in free agency, and edge-rushing monster Dee Ford acquired via trade in March.

Garoppolo has everything he needs to hit all those passing figures. If he does, no 49ers fan will bat an eye at his contract. He just needs to stay healthy.