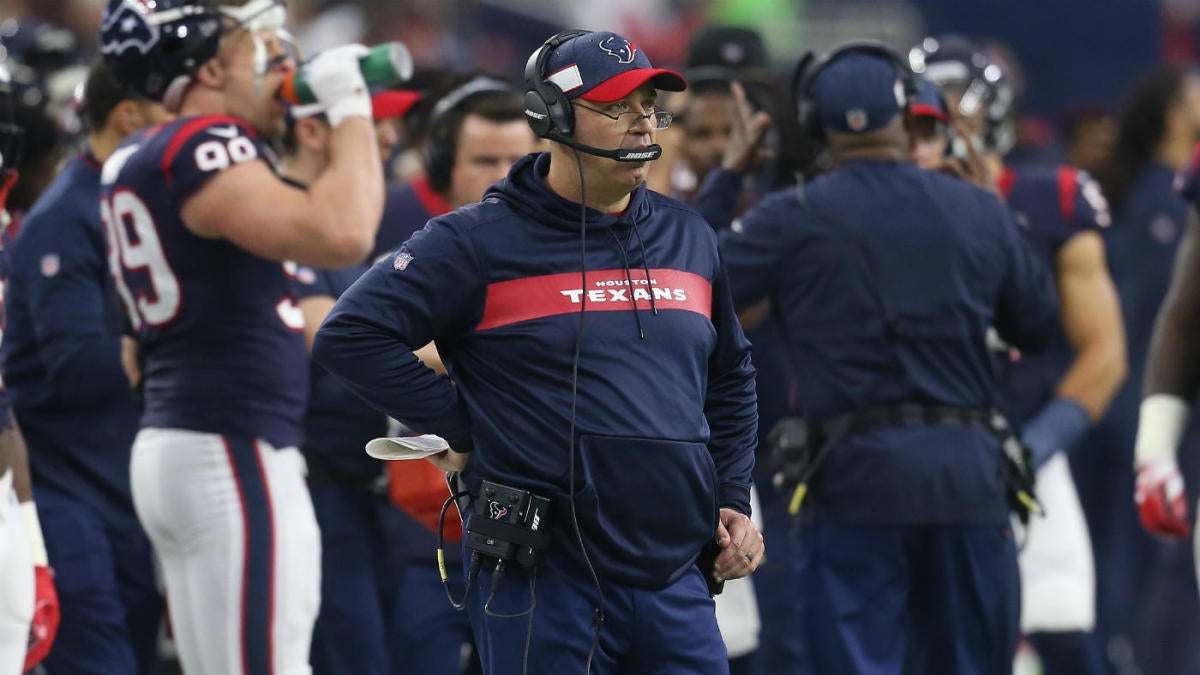 What in the blazes is going on down in Houston? My goodness. Not a good look. Again.

If the Texans have a plan, well, they have a funny way of showing it. If they are in fact trying to give the appearance of a fairly rudderless, fractured franchise in the aftermath of the passing of patriarch Bob McNair, then full marks. They’ve nailed the landing.

Cal McNair, the late owner’s son whose rise to the throne has included no shortage of palace intrigue and controversy, enters the 2019 season now under quite the cloud after the botched pursuit of New England personnel exec Nick Caserio. Head coach/GM-outlaster/Machiavellian devotee Bill O’Brien enters training camp next month under as much pressure as any coach in the league. The franchise is denying claims of discriminatory firing practices – alleged by former Texans security chief Jeff Pope in a complaint filed with the Equal Employment Opportunity Commission last week – but is doing so while also appearing to have conducted two shambolic Rooney Rule interviews for its GM opening in the wake of Brian Gaine’s surprise dismissal, with their decision to hire no one for the job making it clear their intent was focused on Caserio and Caserio only.

“If you’re firing the GM in June, you are doing it because you know who the next guy is,” said one longtime team executive. “And you’d better make sure that you already have him, or know that you can get him. Otherwise you have a total mess on your hands. Look at the Jets (who dismissed their GM in mid-May) and Joe Douglas (who recently replaced Mike Maccagnan). That was their guy even before the draft. It was obvious the Texans were all-in on Caserio, and that’s fine … as long as you get him.”

Alas, McNair fell woefully short of that goal, making the Texans suddenly one of the most closely watched teams in football during what should be the only slow media cycle in the entire year – mid-June til mid-July. You want to go ahead and conduct a GM search around then, getting rid of a GM in Gaine who had only been on the job less than 18 months, won a division title, and was there clearly as a functionary/subordinate for/to O’Brien anyway, people are going to notice. You do it only to come away with this outcome, they’re gonna laugh at you until proven otherwise.

“I’ll give them credit for one thing,” said another rival team executive, “they made (owner Chris) Johnson and the Jets look like a well-run organization.”

Firing a GM in the spring or summer is no longer unusual – in fact, it’s been a growing trend I’ve been tracking in this space for quite some time. But in every other instance the team making that move did so with the next GM basically already in hand, and ended up hiring him.

The Bills fired Doug Whaley after years of botched decision making right after the draft, with new coach Sean McDermott already having a strong indication that Brandon Beane, whom he worked with in Carolina, would take Buffalo’s GM job. The Chiefs moved on from John Dorsey already knowing they would promote Brett Veach from within that July. The Panthers fired Dave Gettleman in July with then-owner Jerry Richardson knowing that former-GM Marty Hurney, who still lived in Carolina, would come back to the fold. The Jets made their move a few weeks back knowing Douglas was very close with head coach/interim GM Adam Gase, and that was viewed as an inevitability around the league even before Maccagnan was let go.

And then there’s the Texans. One of these things is not like the other.

All of which makes their decision to interview former Browns GM Ray Farmer and former Lions GM Martin Mayhew – both more than qualified for the job – particularly dubious, given how quickly they opted not to hire any GM at all after they publicly dropped their pursuit of Caserio. Given some of the remarks of Bob McNair during negotiations with players about the decision of some to kneel or sit during the national anthem, as captured on hidden audio, and now with a discrimination charge against them, this would seem to be something of an HR crisis, if nothing else.

If the Texans are going to start whacking another GM – and this time about six weeks before camp opens – then you had best be damn sure of Caserio’s interest, through backchannels or covert ops or whatever. You’d better know what it is going to cost you in terms of cash and title and power structure, and you’d better find a way to know that Bill Belichick is going to allow this to proceed without incident. You had better make every effort through the NFL Management Council to find out if there are any weird quirks in Caserio’s contract that give the Patriots the ability to file tampering charges against you – this is New England and the hoodie, folks, and there is a history with all of this stuff,

And even if this was a normal contract, without the potential for tampering charges, and even if Caserio agrees to take the interview, which is nothing that should be assumed in this scenario … are you sure he wants the job? With Belichick for years telling his underlings that the single most important factor in deciding when to take a job outside of New England is the merits of the owners, is there anything on Cal McNair’s resume that would make you think he has this running a football team thing figured out? Because in this instance, Caserio has all of the leverage, and make no mistake: he is interviewing you, you aren’t interviewing him. He already knows the job is his, if he wants it.

With the single greatest asset in the Texans organization, quarterback Deshaun Watson, seriously wounded in both his seasons in the league, and the offensive line still a major cause of concern, are you positive that Caserio would give up perhaps a final Super Bowl run with Tom Brady for this opportunity? And, with so few GM jobs opening up last January, and a bevy of GMs entering 2019 on the hot seat, are you sure Caserio needs to take your job, right now in June as he is about to go on vacation, rather than play the field and be the biggest fish available potentially to multiple teams/owners after the season? With Douglas off the table to the Jets, Caserio’s presence will loom even larger over the 2020 GM search. If I already know that, then surely he does as well.

It’s pretty clear, dating back to their hiring of O’Brien (and later Mike Vrabel as a coordinator), that the Texans have a Patriots fetish. All fine and dandy. But then you should be as aware as anyone as to how they operate and their ability to obstruct or obscure, and you should have inside intel on which direction various individuals are leaning and what it would take to land them. Yet despite all of those ties to New England, McNair managed to fall flat here.

You start firing GMs in June off a division title as a novice managing partner, you’d better be pretty darn sure that the guy you covet wants you at least almost as much as you want him. And you’d best be certain that there is a clear and direct path to being able to hire him, assuring him all of the power and control that would make him undoubtedly the head of all things football for the Texans and easily able to leave New England if he wished.

So forgive me if I am skeptic as it comes to 2019 Houston Texans (and, for that matter, probably the 2020 Texans as well).

Of course, none of this is to say that the resulting power structure, with former Patriots chaplain/sensei/character coach Jack Easterby assuming significant power and control, can’t work. And, given all I have heard about Easterby’s reputation and acumen and leadership in New England the past few years, and his sterling background, he may be just the type of unique individual who can alter what has seemed to be a poisoned culture in Houston going back to the initial inevitable clashes between O’Brien and then-GM Rick Smith, who was exceedingly close to Bob McNair at the time.

Easterby has been viewed by many in the know around the league as a GM/team president in waiting, though that was never going to come in New England, given the powers that be already in place. If he manages to eliminate the infighting and backbiting in Houston, and handle this owner, and the Texans produce another 10-win season and finally do something of note in the playoffs, then Easterby will be in line for some accolades.

But he’s gonna have his hands full, either way. There are some Texas-sized issues down there. And all eyes will be on Houston.