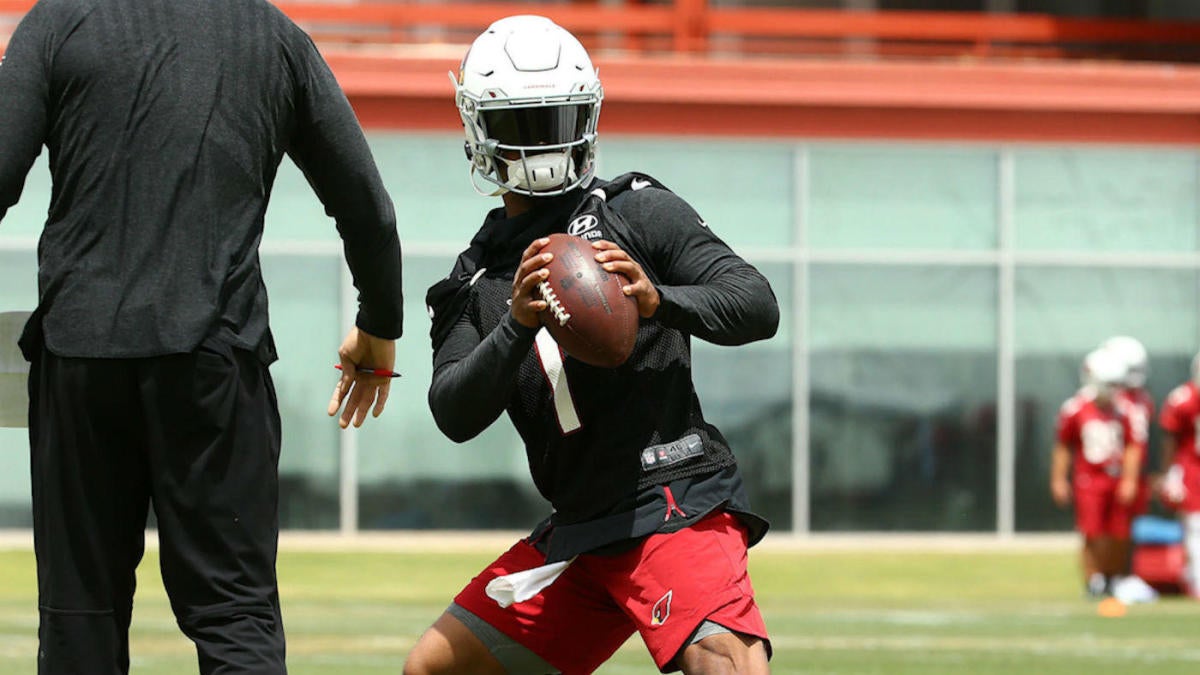 TEMPE, Az. – The trend-breaker, trailblazer, whatever you want to call him, was sitting quietly at his locker Tuesday afternoon seemingly unfazed by the path he is now leading when it comes to playing the quarterback position.

Sure, we’ve seen short quarterbacks succeed in the NFL – even stars like Drew Brees and Russell Wilson – but none of them did so by entering the league with so many eyeballs on them.

That’s why Kyler Murray, just a shade over 5-9, is different.

Brees was a second-round pick and Wilson came in the third. Murray went first to the Arizona Cardinals in this April’s NFL Draft, which means he’s clearly the guy trying to throw out all the preconceived notions about playing the position.

“I think me going No. 1 will have an impact on how people view short quarterbacks,” Murray said following practice. “Obviously, I have to play well.”

Murray came from nowhere to become the first pick in the draft, going from first-time starter in 2018 at Oklahoma to an overnight sensation and the player who can transform the Arizona franchise.

This is his team now. Clearly. If he’s a star, they will be good for a long time. If not, heads will roll and those old stereotypes about playing quarterback as it relates to size will resurface.

That’s quite a burden.

Yet Murray seems undaunted by it all, almost cocky just to be able to cast those doubts aside, not just for himself, but for the 5-10 quarterback out there in high school now who might think he needs to play another position.

I asked Murray if being short is an added chip on his shoulder. He said no, but I get the idea that it is and he’s tired of talking about height.

“I don’t think being short has to do with anything, but I feel like it’s just a part of who I am,” Murray said. “I am who I am.”

“I am not going to grow six inches,” Murray said. “That’s not why I play the game, to prove people wrong because I am short.”

But it’s different watching him throw – for a lot of reasons.

When he throws from the pocket, the ball comes out with an impressive release – Dan Marino-quick – and it gets on top of the receiver in hurry and accurately. That was evident at Tuesday’s practice.

But at times as you watch him practice, it’s hard to even see him through both lines in front of him. That’s why the initial thought when he throws is a mortar firing a shot into the sky is this sure isn’t your daddy’s NFL anymore.

Call me old school since I prefer my quarterbacks taller and more apt to stand in the pocket, but the game is changing and Murray might be the guy who really turns the tables. I am starting to believe he can.

Early indications from the Cardinals are that he will be more than just fine. There have been some uneven days for Murray in the offseason, and Tuesday was just OK from the work I saw, but he seems to be winning over teammates and the staff.

“I have never played with a quarterback that explosive,” veteran receiver Larry Fitzgerald said.

“He wants to be a great player,” Cardinals coach Kliff Kingsbury said.

That’s the word on Murray – he’s already living it and learning it.

Those two are connected now for good in their NFL careers. Kingsbury’s hiring was controversial to some because he didn’t have a winning record (35-40) in college as the coach at Texas Tech and was fired after the 2018 season. Kingsbury also came with the reputation as a single playboy who wasn’t the tried and true football coach – mainly because of one Internet picture that went viral.

But Kingsbury has impressed staffers with his work ethic for the Cardinals, casting aside the idea he might not be ready to be the coach. He is the first to arrive every day at the facility – often getting there at 4:30 in the morning and staying late into the night.

That’s drive. Murray has it as well.

Kingsbury’s spread offense – which nobody is calling the Air-Raid here like it was at Texas Tech – will play right into Murray’s strengths, which is to spread it out and get the ball out or let him take off and make plays with his legs.

“He has the ultimate weapon in the exit button,” Fitzgerald said last week. “Things break down and he can get going pretty quickly.”

Maybe so, but eventually the NFL game gets back to the pocket. Running quarterbacks slow down and they have to be good standing in making reads and throws.

That’s why seeing Murray make throws inside the pocket was a good thing to see Tuesday. What stood out from those throws was that release.

The ball gets out as quick as any passer not named Marino. Some of that could be because of his baseball background, but he also said some of it was the way his father, Kevin, a former college quarterback, taught him to throw it. When I first mentioned his release, before I could finish my question he cut me off.

When I mentioned Marino, he understood what that meant.

“That’s a big compliment,” he said. “You have a long release and DBs are quick to the ball. Defenses are great in this league. The long release isn’t helping you.”

It’s one thing to throw against teammates in practice without pads, but it’s another to do it with pads against an opposition in the fall. That’s why no matter how Murray looks during the offseason or in training camp, there is no way to really gauge his growth.

He is excited about being a rookie starter, almost getting the idea he relishes it by the way he talks.

“I think coming in and playing now is ideal,” he said.

In practice Tuesday he forced a long ball into double coverage that was picked off by star corner Patrick Peterson. Those things will happen in practices when guys take chances.

“I like his attitude because he’s going to take chances,” Kingsbury said. “This is the time to do it. See what you can get away with. You want to go after Pat a couple times, that’s usually the way to learn. He’s aggressive in nature the way he thinks and attacks when he’s on the football field.”

That exact sentiment was something Kansas City Chiefs coach Andy Reid mentioned to me last spring when talking about Patrick Mahomes. All Mahomes did was win NFL MVP in his first year as a starter for the Chiefs.

That’s not to say Murray will be Mahomes in Year 1, but there are similarities in terms of arm strength and a quick release and Mahomes even played for Kingsbury in college.

In three years we will truly know if this trend-changing move will work. If it does, Kyler will be a name like LeBron and Kobe that doesn’t need a last name anymore. If it doesn’t, that 5-10 quarterback in high school might be thinking about a position change again.

That’s the range of where this thing can go for Murray and the Cardinals.

“For me, it’s just about wanting to be the best,” Murray said. “None of that other stuff matters.”