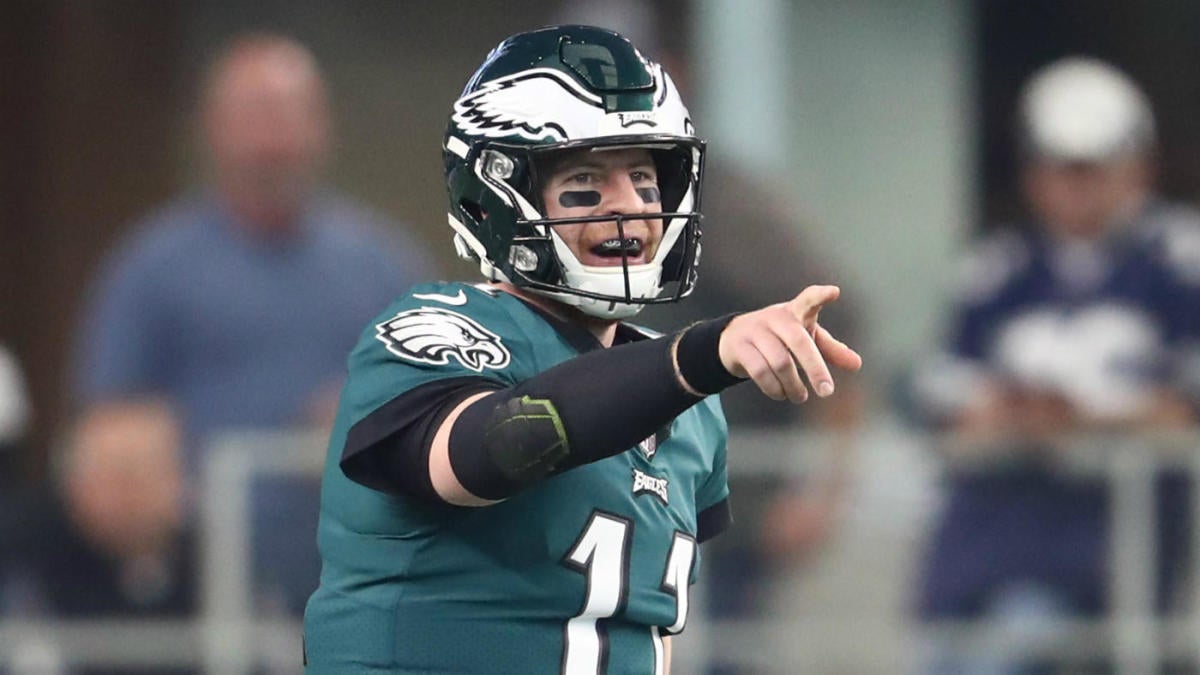 The Eagles put their money where their mouth was last week by extending quarterback Carson Wentz’s contract with two years remaining despite his injury history. Howie Roseman, Philadelphia’s executive vice-president of football operations, had stated at the NFL owners meeting in late March he wanted a Wentz contract extension sooner rather than later.

Wentz signed a four-year, $128 million extension containing an NFL record $107.9 million in guarantees, with $66 million fully guaranteed at signing. The deal is worth up to $144 million through salary escalators.

Wentz was a leading candidate for NFL MVP in 2017 when he tore multiple ligaments in his left knee near the end of the season. Backup quarterback Nick Foles led the Eagles to a Super Bowl LII win while earning game MVP honors in the process. A stress fracture in Wentz’s back ended his 2018 season early. Foles came to Philadelphia’s rescue for a second straight year in directing the Eagles to victory in the final three regular-season games for a wild-card playoff berth before being eliminated in the divisional playoffs.

Wentz was also bitten by the injury bug in college. He missed a majority of his senior year at North Dakota State with a broken wrist. All of Philadelphia’s eggs were put in the Wentz basket after letting Foles walk in free agency this offseason. A segment of the Eagles fan base would have preferred for Foles to remain in Philadelphia, with Wentz being traded for a package of draft picks. Foles signed a four-year, $88 million contract with the Jaguars with a maximum value of $102 million through incentives in which $50.125 million is guaranteed.

Why a Wentz deal now made sense

The Wentz deal is another example of Roseman continuing former longtime Eagles president Joe Banner’s practice of signing key young players to extensions well before they could hit the open market. Generally, the longer a team waits to sign an upper-echelon player, the more it will cost in the long run.

Wentz becoming the NFL’s fourth-highest-paid player by average yearly salary at $32 million per year may seem a bit surprising to some, given his injury history. The deal will be considered a relative bargain if Wentz’s play returns to a MVP caliber level while putting the injuries behind him.

Having Wentz play the fourth year of his rookie contract with the type of season the Eagles probably expect him to have would have given him leverage to become the league’s highest-paid player and set the bar in most of the important contract metrics. The base value of any deal in 2020, with Wentz coming close to or living up to expectations for this season, most certainly would have exceeded the $36-million-per-year maximum value of his new contract. Topping Falcons quarterback Matt Ryan’s NFL-best $94.5 million guaranteed at signing likely would have been a necessity, whereas the $66 million Wentz actually has is the fifth most in an NFL contract.

Wentz taking the security he is getting from a deal with two years left on his rookie contract is understandable because of his previous injuries. Doing so shifts the risk in the situation from Wentz to the Eagles.

Attaining the maximum value from the deal requires a high level of performance individually and by the Eagles. The additional $16 million is based on league honors Wentz earns (Pro Bowl selections, MVP and Offensive Player of the Year awards) and Philadelphia’s Super Bowl wins.

The cost certainty from doing the deal two years early should provide better salary cap planning for the Eagles. A portion of the extension is being allocated to the remaining two years of Wentz’s rookie deal, which in turn should make his cap numbers more manageable in the contract’s latter years. Wentz’s $16,367,683 signing bonus is being prorated or allocated evenly under the cap beginning this year through 2023.

The proration on the $30 million payment to Wentz for the Eagles to pick up the 2024 option year is $6 million annually beginning in 2020. There is absolutely no chance that the Eagles won’t pay the $30 million to exercise the option for 2024. Wentz’s 2020 base salary is a fully guaranteed $31.383 million without picking up the option, which would make his 2020 salary cap number slightly over $42.65 million, instead of $1.383 million.

What Wentz’s deal means for the QB market

Wentz’s deal is going to have the most direct impact on a couple of quarterbacks from his 2016 draft class: Jared Goff and Dak Prescott. Goff’s situation is arguably more interesting.

It’s going to be hard for the Rams to deny the relevance of Wentz’s contract because the two quarterbacks were selected first and second in the 2016 NFL draft and have the same representation, Rep1 Sports. Ryan Tollner is the lead agent for both players.

The Rams have been the NFL’s most proactive team in signing first-round picks to extensions either before the start of or during the early part of their fourth season (wide receiver Tavon Austin, defensive end Robert Quinn and running back Todd Gurley). Rams president Kevin Demoff recently acknowledged that negotiations for a new Goff deal haven’t started and subsequently said Wentz’s deal doesn’t affect the timeline. Goff’s terrible performance against the Patriots in Super Bowl LIII and a late-season slump which took him out of the 2018 league MVP discussion could be a cause for concern. The 2016 first-overall pick doesn’t appear to be in any rush either. When asked at Rams minicamp this week, Goff downplayed any desire for a new contract immediately.

Once negotiations for a new Goff contract begin, Rep1 is going to insist that Wentz’s deal is the starting point for serious discussions. Many agents in Tollner’s position would call Wentz’s deal Goff’s salary floor for a new contract. Tollner can legitimately claim he has a better understanding of the quarterback salary landscape than the Rams because of the role Rep1 has had in shaping the market this offseason. In addition to Wentz’s contract, Tollner and Rep1 negotiated a short-term $34-million-per-year extension for Steelers quarterback Ben Roethlisberger a couple of months ago.

There’s more urgency with Prescott than Wentz. As a 2016 fourth-round pick, Prescott is in a contract year. Goff isn’t because the Rams picked up the fifth year for first-round picks on him. His 2020 option-year salary is $22.783 million.

Negotiations have been ongoing with Prescott. He is the Cowboys‘ top signing priority. NFL Media’s Mike Garafolo reported last week that the two sides aren’t close.

Cowboys chief operating officer and executive vice president Stephen Jones has been trying to publicly sell Prescott as well as wide receiver Amari Cooper and running back Ezekiel Elliott, who Dallas also plans to eventually sign long-term, on the concept of leaving a little money on the table to make it easier to keep the core of the team together for a sustained championship run. When asked about giving a Dallas a hometown discount prior to Jones’ statements, Prescott was pretty adamant about not following Patriots quarterback Tom Brady’s lead. Brady started consistently undercutting the market rather than setting it in 2013, when he first renegotiated the 2010 extension which made him the NFL’s highest-paid player.

The Cowboys almost undoubtedly missed any window they may have had to get Prescott for under $30 million per year by letting Wentz sign first. CAA Sports’ Todd France, who is Prescott’s agent, will contend that Wentz’s deal is a good barometer for Prescott’s.

Wentz has a higher ceiling than Prescott, as evidenced by his MVP-like performance in 2017. Prescott has never been considered an MVP candidate. He has been the much more reliable quarterback. Prescott hasn’t missed any games during his three NFL seasons.
Only Brady, who is arguably the greatest football player of all-time, has more than Prescott’s 32 regular-season wins since he entered the NFL in 2016. Prescott’s 14 game-winning drives are the most in league history during a quarterback’s first three NFL seasons. The Cowboys have won the NFC East twice during the three years with the 2016 NFL Offensive Rookie of the Year at quarterback.
Prescott will be destined for a franchise tag in 2020 if he plays out his rookie contract. The 2020 non-exclusive quarterback number should be in the $27 million neighborhood if the salary cap is in the $200 million neighborhood next offseason. A second franchise tag in 2021 at a CBA mandated 20% increase over the 2020 franchise number would be over $32 million.

The exclusive franchise tag might be in order with an expiring contract, particularly if Prescott’s increased effectiveness over the second half of the 2018 season after trading for Copper is a sign of things to come. Prescott ranked in the top 10 over the second half of the season in most conventional statistical categories as the Cowboys tied the Colts at 7-1 for the NFL’s best record in that stretch.

The exclusive version would prohibit Prescott from soliciting an offer sheet from other NFL teams. The calculation is also different from the non-exclusive version. An exclusive designation for Prescott would be the average of the top five 2020 quarterback salaries (usually salary cap numbers) when the restricted free agent signing period ended, which would be about a week before the 2020 NFL Draft. This number currently projects to $32.221 million. A second franchise tag in 2021 at a 20 percent increase over Prescott’s 2020 franchise number would be $38,662,520.

Predictions for Prescott and Goff

The Cowboys and Prescott find common ground on a new deal before the regular season starts. The deal averages less than Wentz’s $32 million per year but more than Ryan’s $30 million. Prescott gets more than Wentz’s $66 million fully guaranteed signing. His overall contract guarantees fall short of Wentz’s $107.9 million.

Goff plays this season under his rookie contract. As long as last season’s slump and the Super Bowl performance are just a bump in the road, Goff tops Wentz’s average yearly salary, overall guarantees and amount fully guaranteed at signing with a new deal in 2020. Goff would probably have to consistently perform a level similar to what his backup Blake Bortles did last season for the Jaguars in order for the Rams get rid of him before the option year becomes fully guaranteed next March.

The big risk in the Rams waiting with Goff playing well is the Chiefs signing 2018 NFL MVP Patrick Mahomes to an extension shortly after he is eligible once the upcoming regular season ends. Mahomes is potentially the NFL’s first $40-million-per-year player. Doing a Goff deal after a Mahomes deal is in the marketplace will probably force the Rams to beat Wentz’s deal by a considerable margin.