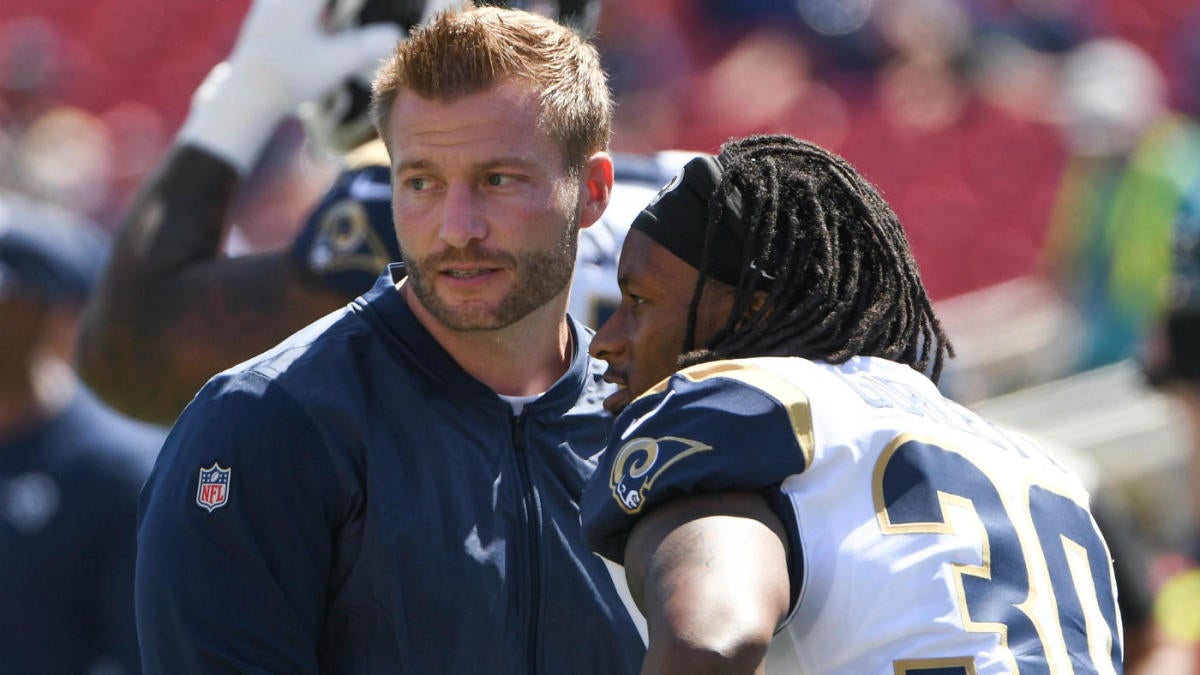 Last year we went team-by-team with these picks, but this year we’ll be going back to the divisional format I used in 2016 and 2017. If you hate any picks, love any picks or have better ideas, leave them in the comments or yell at me on Twitter @WillBrinson. You can also get an audio breakdown of all these divisions on the Pick Six Podcast, as we run through each division on our DAILY NFL PODCAST over the next few weeks. Listen to the latest episode breaking down the NFC West below.

The defending NFC champs have high expectations this season, and why wouldn’t they? The Rams return most of the roster that nearly captured a Super Bowl title, although this feels a little different than last year did. Jared Goff is back and will be playing to get paid. Brandin Cooks, Robert Woods and Cooper Kupp should provide him plenty of weapons. But what’s the deal with Todd Gurley? The Rams running back remains an enigma wrapped in a mystery as more and more praise is heaped on Darrell Henderson. The offensive line is a concern for me: Andrew Whitworth is back, but they lost center John Sullivan and left guard Rodger Saffold to free agency. Defensively, Ndamukong Suh departed for Tampa, but Dante Fowler returned. Clay Matthews and Eric Weddle were big name, albeit older, additions in free agency. Aaron Donald is Aaron Donald so this unit can only suffer so much, but you could look at the defense and expect some potential regression to occur. I think it’s fair to wonder whether or not this team could suffer from a Super Bowl hangover, as we’ve seen several teams get close to winning a title and then struggle the year after falling short. Their schedule is tough. The Rams open at the Panthers, then get the Saints at home in Week 2, the Browns on the road in Week 3 and the Buccaneers at home in Week 4. The Seahawks on the road in a short week is next. The 49ers (home), Falcons (road) and Bengals (home) is a nice little three-game stretch before the Week 9 bye. Outside of two matchups against a better Arizona team, there isn’t an easy game on the schedule after the break. Steelers (road), Bears (home), Ravens (home), Seahawks (home), Cowboys (road) and 49ers (road) is a hard slate. The reality is this number’s too high to take the over, but betting against Sean McVay is not an ideal scenario. I would lean 10 wins for them and take the under — I wouldn’t be surprised if they took a fairly significant step back either.

This number is way too low. There’s reason to be skeptical of the Seahawks for sure. The offense might be a run-heavy unit again and that didn’t work out well during the playoffs. Who is Russell Wilson throwing to? That’s a concern, but Tyler Lockett is a hyper efficient receiver who sort of developed into an elite-ish option last year and could only get better. Pair him with D.K. Metcalf and you’ve got some guys who are a perfect fit for run-run-play action shot, which sure feels like what Brian Schottenheimer is going to run with this team. The offensive line is a good unit now, thanks to the disappearance of Tom Cable. Defensively, nothing pops out to you, but this is a very underrated, above average unit. They were 14th in DVOA last season and could take a leap forward this year: L.J. Collier, their first-round pick, needs to pan out as an edge rusher because Frank Clark’s departure is a big loss. But they’re loaded in the middle with Jarran Reed, Poona Ford and Naz Jones. Barkevious Mingo and Ezekiel Ansah give them some other first-round upside to rush the passer. The secondary could be loaded if Tre Flowers and Shaquem Griffin both take another step. Their schedule is rough with home games early against the Saints and Rams, but they get two new coaches in their first four weeks. Seattle needs to stack wins before a brutal post-bye stretch that features the Eagles (road), Vikings (home), Rams (road) and Panthers (road) but they close with the 49ers and Cardinals at home. I see 9+ wins though.

The hype train didn’t pull out of the station as fast for San Francisco this year. Last season, the 49ers were basically the 2018 version of the 2019 Browns, with expectations through the roof. Someone picked Jimmy Garoppolo to win MVP. Not even kidding. This year expectations are more modest but still kind of high: the 49ers have won a total of 17 games since Jim Harbaugh left (no, really) and they’re supposed to be a wild card team this season? I get why. If Kyle Shanahan’s scheme can click and Jimmy G can stay healthy, this should be a much better offense. The win expectancy pegged them as almost a six-win team last year so they were very unlucky. They were also swept by Steve Wilks and the Cardinals, somehow. They bolstered their pass rush this offseason by adding Dee Ford via trade and Nick Bosa via the draft. The defensive line with those guys and DeForest Buckner should be very good — if Arik Armstead and/or Solomon Thomas can take a step, it could be great. There are big names in the secondary but there should also be concerns about the unit’s ability to hold up. I actually like the weapons on this team. George Kittle is a budding superstar and Marquise Goodwin/Dante Pettis/Deebo Samuel is a sneaky good trio. Two games to start on the road plus the Steelers at home before a Week 4 bye? They better start hot. After the break they get the Browns at home and the Rams/Redskins on the road. Rough way to open a make-or-break season. They get a “break” with the Panthers (home), Cardinals (road), Seahawks (home) and Cardinals (home) before a crippling close to the season: Packers (home), Ravens (road), Saints (road), Falcons (home), Rams (home) and Seahawks (road). I can’t count nine wins.

This might be the toughest team in the NFL to project, just because there are so many unknowns. What I do like early: Their Week 1 over, which is less than 50 (currently 48). The Lions aren’t a high-octane offense, but Arizona’s defense won’t be great without Patrick Peterson and I expect Kliff Kingsbury’s team to at least score some points. Or at least run some plays and create some offense, which is more than you can say about last year’s Cardinals team, which scored 14 or less points NINE TIMES. Their season high for passing yards was 233. How is that even possible? Anyway, Kingsbury’s scheme working in the NFL is sort of treated as a given, which is a little scary. Kyler Murray having a big year is also being treated as a lock, which is concerning. But I think he’ll put up numbers because of the setup and his skillset and the modern NFL game. David Johnson better have a monster year after watching him misused last season. Vance Joseph should go to more man coverage, which is great, except Peterson is missing almost half the season with a suspension. The division looks good as a whole and Arizona has to play the NFC South and the AFC North. They have three very winnable road games against the Giants, Bengals and Buccaneers and should be able to scratch out three or more wins at home (Lions, Panthers, 49ers, Browns?). I’ll lean over here because the number is so low, but I think the assumptions that the Cards will be good — versus simply just more appealing visually — are a little dangerous. If Kyler is great this team can top five wins, though.