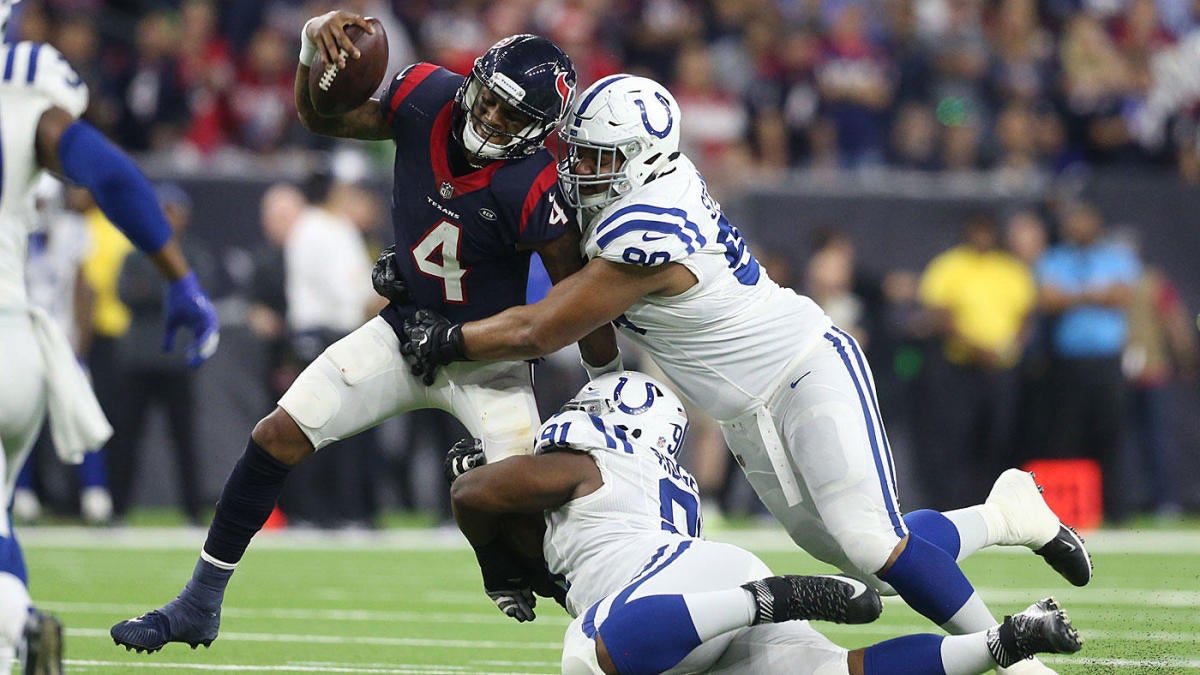 Sixty-two. Any conversation about the 2018 Texans offense has to start there, with that number. In 16 games, it’s how many times franchise quarterback Deshaun Watson was sacked. Once more for effect: 62.

It started early — Watson went down three times against the Patriots in the season-opening loss — and somehow got worse. There were the seven sacks against the Colts in Week 4 and seven more two weeks later against the Bills. There was also the six-game stretch to end the season in which Watson was sacked 29 times and at least at least four times each game.

By comparison, the Chiefs‘ Patrick Mahomes, another first-round pick in the 2017 class, and the 2018 MVP, went down just 26 times over 16 games. Andrew Luck led all 16-game starters with just 18 sacks.

Rock bottom came in the aftermath of that Bills game. Watson, reportedly dealing with a cracked rib, a bruised lung and a partially collapsing lung, couldn’t fly with his teammates to Jacksonville for the Week 7 game. Instead, he traveled the 800 miles on a bus because the team was concerned the air pressure at altitude could have an effect on his injuries.

The Texans cruised to a 20-7 victory, Watson threw a touchdown pass, and more importantly, he was sacked just once.

”I give credit to Deshaun because I think he is a very tough individual,” coach Bill O’Brien said after the game. ”He has sacrificed a lot over the last couple of weeks to put himself in a position to play. Great teammate. Loves to win. Loves to play. And I think the world of the guy.”

Some six months later, O’Brien proved just how much he thought of Watson; the Texans drafted offensive tackle Tytus Howard in Round 1 and circled back in Round 2 to take another offensive tackle, Max Scharping. There’s still much to sort out. First, what position will they play? Howard played both left and right tackle at Alabama State and Scharping was a left tackle at Northern Illinois.

“I would say that both of those guys, Tytus Howard and — now, Tytus will play a lot of left tackle, play a lot of right tackle, but he can play guard, too,” O’Brien said last month during rookie minicamp. “Scharping can do both, too. So, both guys are very smart guys. In the brief time that we’ve them, they’ve picked up a lot of what we’re trying to do. Really sharp guys, good guys, and we’re thrilled to have them. I mean, absolutely thrilled to have them.”

There’s also this, which may not immediately assuage concerns about keeping Watson upright: both players are from small schools and the learning curve could be steep as they transition from college to the NFL. This hasn’t been lost on O’Brien.

“When you watch college football, especially like, let’s just say at the offensive tackle position, there’s not a whole lot of (J.J.) Watts and (Jadeveon) Clowneys rushing off of the edge in college football,” the coach said. “Now, there are with a couple of teams, but not many. You’re talking about these guys really getting used to the technique and the speed and the strength of the game, because that’s a huge adjustment when you jump to this league. Then, on the inside, it’s the same thing. Strength and speed, and then making sure that they understand the information so they can learn and get out there and play.”

It’s hard to imagine both rookies find their way into the starting lineup immediately, mostly for the reasons O’Brien outlined above. But it’s also impossible to overstate just how bad this unit was a season ago; according to Football Outsiders, Houston’s offensive line ranked 27th in run blocking in 2018 and dead least in pass protection. Part of that was because of injury — right tackle Seantrel Henderson was lost for the year after suffering a Week 1 ankle injury — though most of it was due to a lot of mediocre football.

But the Texans could have as many as four new faces on the offensive line in ’19. Center Nick Martin, who graded out as the 21st best center last season, remains the starter. After that, jobs are open. As the Texans begin mandatory workouts, Henderson will face competition from Howard, and Scharping and Matinas Rankin, a 2018 third-rounder, could push for time at one of the guard positions. Left tackle Julién Davenport, who started 15 games last season ranked 73rd among all tackles, via PFF. It’s why the Texans signed Matt Kalil, the former Vikings first-round pick who missed last season in Carolina because of a knee injury. He’ll have an opportunity to win the job when he’s fully healthy.

But will it be enough?

On draft night it sure felt like the Texans overcompensated by drafting Howard 23rd overall, one pick after the Eagles took Washington State left tackle Andre Dilliard, who by most accounts was a first-round talent. While there was plenty of pre-draft buzz about Howard, his small-school pedigree and raw ability made him a Day 2 pick in our mind. That reality, coupled with the glaring issues along Houston’s O-line a season ago is why there has been speculation that the team should trade for Redskins left tackle Trent Williams, who has vowed to never play for Washington again — especially since the Texans have more than $40 million in cap space, which is second behind only the Colts.

The Athletic‘s Aaron Reiss wrote last week that a Williams trade was a long shot because it would run counter to general manager Brian Gaine’s offseason philosophy, when he didn’t pursue Trent Brown or trade up for Dilliard. The Texans fired Gaine a short time later and whomever assumes the job may feel differently about Houston’s offensive line and Williams’ possible place in it.

As it stands, the Texans’ front five aren’t much better than the group that allowed Watson to be sacked 62 times last season, even with the addition of Howard and Scharping, two high-upside prospects from small schools who likely won’t be ready for the starting lineup anytime soon.

The good news is that Houston went 11-5 and won the division last year despite the offensive line. The bad news is that all changes if Watson gets injured. Put another way: AJ McCarron is one play away from becoming the Texans’ starting quarterback.