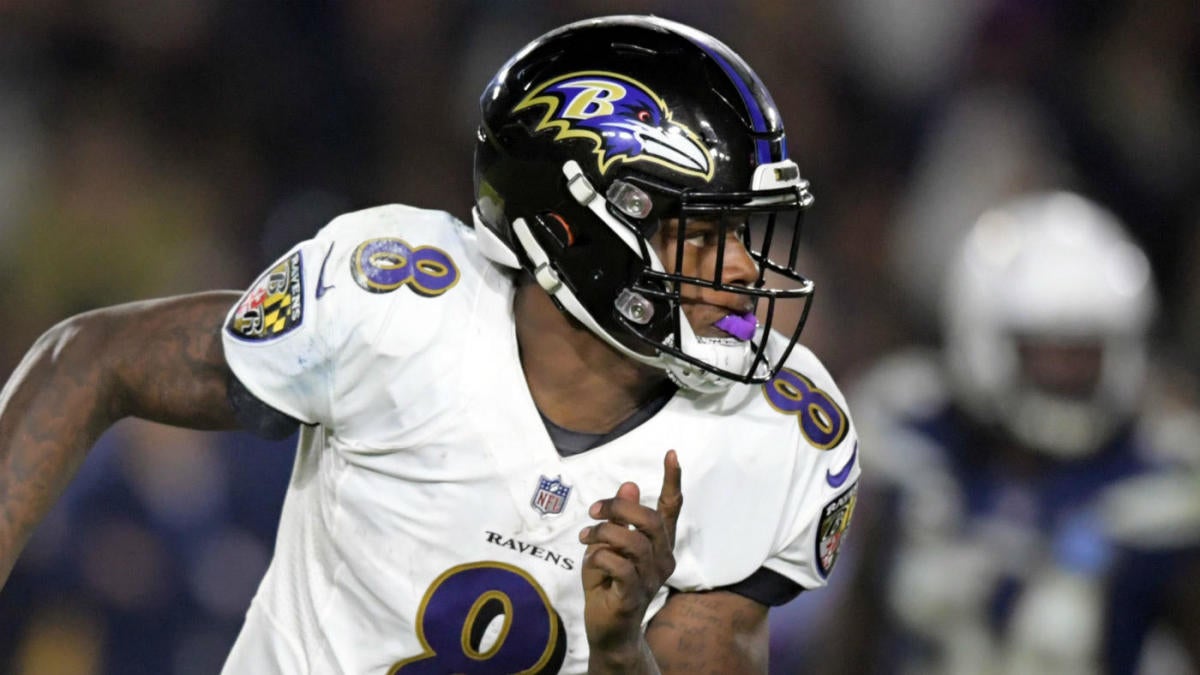 OWINGS MILLS, MD — Two weeks after Ravens quarterback Lamar Jackson created a stir by opining on the surprise implementation of “a totally new offense,” his coach welcomed a familiar face out to the field before practice. John Harbaugh was all smiles on Thursday greeting college football coaching legend Paul Johnson, a proven devotee of the triple option and a staunch proponent of running the football who emphasized that part of the game even with the likes of future NFL All-Pro Calvin Johnson on his Georgia Tech roster.

“His favorite play was my dad’s favorite play: the mid-line dive option,” Harbaugh quipped, vowing to absorb as much as he could from Johnson’s visit. So, um, forgive me if I’m not buying the notion of a Baltimore Ravens identity crisis on offense.

Johnson, whose offense Harbaugh’s father implemented at Western Kentucky way back in the day, is just the latest in a line of college coaches — most if not all of them perfecters of one form of a run/pass option offense or another — to have visited the Ravens’ facility this spring to watch practice and break down film with Harbaugh’s staff. A year ago, the Ravens ran the ball more often than any club in the NFL once Jackson took over for a then-injured Joe Flacco, and with more success than any team in the NFL. They opened the offseason by spending big to retain dominant blocking tight end Nick Boyle, then signed former Pro Bowl running back Mark Ingram from New Orleans. Oh, and Greg Roman, who just happens to have overseen option-heavy offenses for years now, ascended to the offensive coordinator role, replacing pass-happy Marty Mornhinweg.

Newsflash: Sure, the Ravens have changed their nomenclature in the passing game and added badly needed speed and twitch at wide receiver through the draft. But this team is going to pound the ground above all else; it will continue to try to confound and overpower teams with altering mesh-points with an RPO-based offense, and I would fully expect them to lead the NFL in rushing in 2019. They certainly hope to sprinkle the ball around more liberally through the air and are taking a painstaking approach with Jackson to do so. But this team knows what it does best and what provides the clearest path to winning football games, and that ain’t changing all that much.

“I can’t give away any secrets,” said backup quarterback Robert Griffin III, who has become a mentor to Jackson. “But at the end of the day, the way we ran the football at end of last year was pretty special. We went from near the bottom of the league to basically the best in the league (once Jackson took over) … So our focus is on developing our passing game and what we are good at there so it can aid our running game. Don’t get it twisted — we’re going to run the ball a bunch. And we’ll also have to throw it.”

Or, as Gus Edwards — one of four legit NFL running backs on this roster — simply put it: “Our identity is running the ball right now, and that’s what we want to stick to.”

Jackson, who was not available to the media after Thursday’s open practice, created some angst and commotion in Baltimore with his recent comments, with some fretting that the Ravens would try to mimic the 1982 San Diego Chargers or something like that with a novice-but-promising QB who is still mastering some fundamentals. That simply isn’t going to be the case.

Owner Steve Bisciotti’s remarks on a season-ticket holder conference call that, “I think you’ll be pleasantly surprised that Lamar is not going to be running 20 times a game,” led to more probing about how different this approach might be, but belies the fact that with so many options available to run the ball, there won’t be any Ravens running 20 times a game despite all of the volume of run plays expected. Ingram, Edwards (who finished third in the NFL in total rushing yards from the point Jackson took over at QB), and versatile Kenneth Dixon were joined by explosive fourth-round pick Justice Hill, while speedy receivers Marquise Brown and Chris Moore can get involved with the ground game, too.

“We know what we’re gonna be good at,” left tackle Ronnie Stanley told me, “and we know that to get through the playoffs you’re going to need a quality running game. You’re not going to make it all the way without a great running team. That’s something that we’ve dedicated ourselves to, but we’re not throwing all of our eggs in one basket. We’re still trying to be a more balanced team.”

From the point Jackson (who completed 58 percent of his passes with a rating of 84.5 as a rookie) took over last season in mid-November — in Week 10, with Baltimore spiraling at 4-5 on the bye — Baltimore went on to run the ball 101 times more than any other club in football and for around 600 yards more than anyone else. Those are staggering differentials for such a small sample size, and they were doing it with not particularly explosive, journeymen types like Edwards, Dixon and Ty Montgomery. The personnel at running back is superior now.

So the winning equation for a team that prides itself historically on stout defense is not going to all of a sudden change dramatically, especially with a quarterback who is getting starting offseason reps for the first time. The Ravens aren’t going to be throwing 40 times a game, but they will need more accuracy and potency from Jackson when they do attempt to matriculate the ball methodically underneath, and then exploit those eight- and nine-man fronts with deep shots downfield.

Jackson’s foibles in practice this spring have been well chronicled, and over-obsessed about in some quarters, frankly. Thursday was again rough at times, with balls going astray and an errant end-zone pass picked off. But one should keep in mind that Baltimore’s stingy defense is uniquely adept at stopping this group, and with the team in shells and now pads, they aren’t changing the point of attack and running RPOs and fakes to bait pass rushers. As has been the case since he took over in the huddle, his teammates have been unfailing supportive, championing the 22-year-old’s growth.

“A lot of people try to critique him and talk about how he throws,” veteran receiver Chris Moore said. “But he’s a playmaker. He’s an athlete. And he is so hard on himself, too. He’s a perfectionist, and he’s gotten better every single week, and he’ll only continue to get better.”

Jackson isn’t able to improvise, really, at practice, or extend plays in the way that conjures the very magic that catapulted him into the first round a year ago. In this session he was without first-round picks from last year (tight end Hayden Hurst) and this year (receiver Marquise Brown, a true burner still recovering from a collegiate Lisfranc injury).

It’s quite difficult to mimic what this offense does best in any practice (the pass game and play action feeds so much off the run attack), much less one with the physical limitations of an OTA, and Jackson is asked to throw more from the pocket in a typical drop-back manner in these OTAs than I suspect comes to pass most Sundays. He continues to throw a tighter spiral, and his deep ball remains tantalizing as well as he continues to make some expected novice mistakes.

“I think he was reeling a little bit there, but at same time he did a good job of finishing strong in the two-minute drill,” Griffin told me. “And that’s what it comes down to — one throw can change a game. Look at Tim Tebow when he was with the Broncos and he wasn’t playing very well for a game and then boom, he throws a TD in OT in the playoffs and it’s over.

“And I think Lamar is getting better accepting the role he has now, and he knows his running ability is always going to be there, and you have to use it. But you have to get better as a passer, too.”

A good bit of this day was spent working on fundamentals, not even requiring the throwing of a ball. Jackson and the other quarterbacks spent considerable time on a separate field with QB coach James Urban repeating basic movements and motions over and over again. Jackson would shuffle down the field, as if sliding up in the pocket, with Urban holding his hips from behind. The QBs would hold their arms crossing over their chests, as if in a straitjacket, and work repeatedly on their footwork and then their hip torque, every movement being watched and honed. Time and again they would thrust through with Urban checking the rotation of the hips and shoulders — nary a thrown ball in sight — almost like a batter at a tee trying to perfect his launch angle. They would work on a three-step drop and then hold the ball in a certain position without letting it fly.

It is a complete holistic approach, literally from feet to head, aimed at fostering Jackson’s development and overlooking no details. Paul Jackson, unsuccessful at recruiting Jackson to Georgia Tech, certainly seems intrigued by the possibilities of his blossoming in Harbaugh’s hands — “He is a dynamic player at the position, and I am sure he’ll get better and better” — and it was clear from the first whistle to the last on Thursday that this 2019 Ravens offseason is devoted to building around him and putting him in best position to flourish.

A year ago, he was under Flacco’s Super Bowl winning shadow; now he is the franchise.

“From a quarterback’s standpoint, you want to know you have that support,” said Griffin, who has seen everything in his fall from franchise savior to being out of the league for a year. “And he knows that he has that support not only from the guys in the locker room, and not just from the guys in the QB room, but he’s got it from the coaches and from the owner and the organization as a whole.

“This is Lamar’s team, and we’re all behind him. And I think that makes him — I hate to say comfortable — but you are more comfortable in that when you step foot in the building you know this is what it is, and this is going to go by the beat of my drum, and I can take us as far as we can go. And that’s kind of where he’s at right now. He realizes that he can be himself, and be a leader, and he doesn’t have to defer to anybody else or anything. I’m happy for him, and I tell him all the time, ‘This is great that the team and organization is doing this for you. It’s going to help you be successful.'”