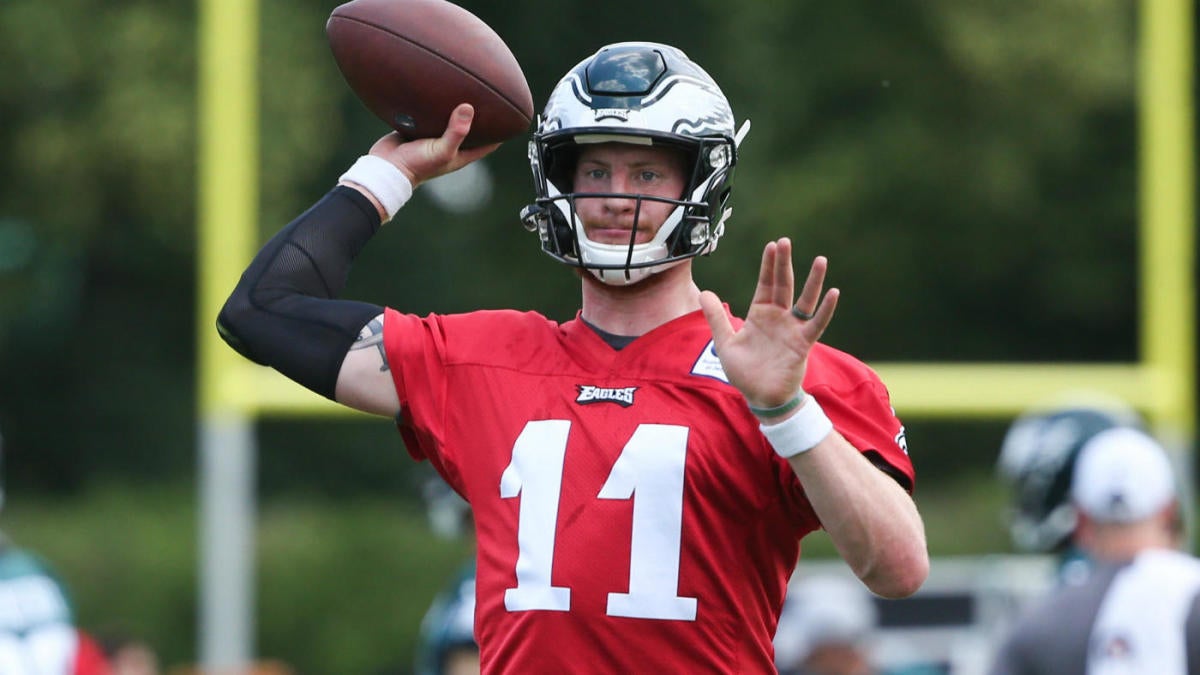 The Philadelphia Eagles knew what they wanted in the 2015 NFL Draft and did not hesitate to move up and get it, trading future assets to acquire Carson Wentz with the No. 2 overall pick. So it should surprise no one to see them reward Wentz with a massive contract ahead of the 2019 season.

It wasn’t cheap to pay Wentz, but there is a very good chance the deal looks like a bargain in the next few years. Wentz is below Russell Wilson, Aaron Rodgers and Ben Roethlisberger in average annual value (ignoring the $2 million for Wentz in the coming season). It’s a contract that makes sense for both sides. Wentz does not want to risk playing in 2019 and getting injured and then having the Eagles balk at giving him a contract in the range of what he wants.

The Eagles would not want to risk riding things out for one more year, watching Wentz have an MVP season and then being forced to walk a tightrope over the following offseason with negotiations. If Wentz plays 16 games in 2019 and has anything remotely on par with his current statistical production, he would command more money than any of the aforementioned quarterbacks got, because of his leverage, his production and his age.

So this is a deal that works for both parties. The Eagles believe in Wentz and want to lock him down. They were going to have to pay him at some point. They’re getting a discount based on his injury history relative to the quarterback market as a whole. Wentz wants to be in Philadelphia and get his long-term security taken care of; this deal does both and he’s going to be unfathomably rich while also being able to play the “I left a little on the table to help my team” card whenever he wants.

The timing and financials make a ton of sense for both sides. Kudos to the Eagles and Wentz for finding a middle ground and moving on. It’s what smart organizations do. Speaking of which, there are a pair of high-profile teams in the Cowboys and Rams who now have to decide how to handle their respective quarterback situations.

Let’s look at how Wentz’s deal affects both Dak Prescott and Jared Goff, which is also what Jason La Canfora and I did on the most recent edition of the Pick Six Podcast. Listen to that ep below and make sure to subscribe to get a DAILY NFL PODCAST.

If anyone should be upset by the Wentz deal, it’s the Dallas Cowboys. On one hand, Wentz didn’t shatter the quarterback market with his deal. He could have conceivably held out and topped Russell Wilson, Aaron Rodgers and Ben Roethlisberger’s deals, but he didn’t. So that’s good for Dallas. On the other hand, there is no chance Prescott takes less than Wentz when it comes to his contract. Wentz has played at an MVP level for stretches, but Prescott won Offensive Rookie of the Year and has never missed a game. He’s won multiple division titles for the Cowboys. That matters. Also mattering? Prescott has been severely underpaid thus far in his career relative to Wentz. Spending the first three (four?) years of his deal on a fourth-round rookie salary will likely incentivize Prescott to make as much money as he can on his next contract, especially considering his age (he’ll turn 26 this offseason, meaning he might get just two full length deals, although considering how the Cowboys operate he’ll probably sign 13 extensions between now and 2025).

Prescott’s case is pretty open and shut, really. He’s 32-16 as a starter, he’s completed 66.1 percent of his passes, averaged 3,625 yards per year and thrown 67 touchdowns to just 25 interceptions. He took over for an injured Tony Romo as a rookie and somehow displaced arguably the best Cowboys quarterback of all time, without really skipping a beat (we at CBS are thankful for the progression, as it resulted in Romo getting to the booth and killing it there). Prescott broke Tom Brady’s record for most passes without an interception to start a season and continues to be a positive influence in the community.

Jerry Jones has openly said he plans on paying Prescott a ton of money at some point. The Cowboys contract dance is weird. Jerry opines publicly about wanting to pay guys, then privately there’s a bit more of a squeeze in terms of negotiations. Eventually they get the core guys paid (see: DeMarcus Lawrence). But there seems to be a very Texan way of negotiating, in the sense that the Joneses are willing to push the boundary on WHEN it happens. They’re fully aware the franchise tag is in their back pocket with Dak next offseason. Mike Garafolo of NFL Media reported Friday the two sides aren’t close and it sounds like nothing is happening until at least training camp.

The problem for the Cowboys in kicking the can down the road is they will only continue to increase the amount of guaranteed money they’re forced to give Prescott if they have to use the franchise tag on him (which they will barring an extension before the end of the 2019 season/early portion of the offseason). Maybe Prescott has a monster year, they win the Super Bowl and no one cares about how much money they give Dak. Or maybe the Cowboys go 10-6, have a really nice season, Prescott plays slightly better than he did in 2018 and suddenly there’s a PROBLEM when it comes to his deal because there’s not a reasonable middle ground, with said middle ground being snuffed out by the Wentz contract. Add another W to Howie Roseman’s ledger for the deal in that regard.

In theory Goff should be even more comparable to Wentz than Dak, because he was the No. 1 overall pick and Wentz was No. 2. Plus, both Wentz and Goff are represented by Ryan Tollner, who has an impressive history of squeezing teams for max dollars when it comes to quarterback contracts.

But there are certainly questions about what a Goff deal would look like, particularly with the 2018 season ending in pretty poor fashion for the former California star.

Indeed, Rams COO Kevin Demoff said recently, via Steve Wyche of NFL Media, the Wentz deal wouldn’t affect Goff talks (OK, sure) but that “The franchise is very committed to Jared Goff.” Demoff may have been specifically referring to the timing of the Goff deal and that could make a lot more sense, as Wyche reported all indications are a deal wouldn’t start cooking with Goff until after this season. In other words, the Rams want to see how Goff looks in his fourth year before locking him down.

Which is probably fine with everyone involved. The Rams certainly could have questions about Goff after seeing how he played down the stretch last year. He still had a monster season: 64.9 completion percentage, 4,688 yards, 32 touchdowns and 12 interceptions plus an eye-popping 8.4 yards per attempt.

His final five games of the regular season — 58.9 completion percentage, 228 yards per game, six touchdowns, six interceptions and just 6.34 yards per attempt — plus his playoff run — 55.7 completion percentage, 237 yards per game, one touchdown, two interceptions, 6.72 yards per attempt — are much less inspiring, however. We’re not going to ding him too badly for being obliterated by Bill Belichick in the Super Bowl; add him to the long list of quarterbacks who’ve been got by the GOAT.

Goff is an odd case because he was taken No. 1 overall, he spent an entire rookie year with Jeff Fisher that can’t be counted against his resume and now he’s putting up huge numbers but some people wonder how much it has to do with a) Sean McVay’s system and b) Todd Gurley’s presence on the roster.

Speaking of Gurley, he might make the Rams shy about giving a young player a monster contract! Or at the very least they’d prefer to keep Goff on a suppressed deal while they navigate the short-term future with Gurley. There is some speculation that McVay would be interested in the idea of replacing Goff with another cheap quarterback in the draft who can operate his system in order to maximize the Rams’ ability to maneuver under the salary cap. I don’t buy it; Goff is the face of a franchise moving into a new stadium, he’s got a great arm and skillset, he’s a former No. 1 overall pick and he’s not even 25 yet. It would be ridiculous to assume he’s peaked and think about moving on. You pay him his money and continue building around him.

Having said that, if Goff has another 4,500+ yard season with big touchdown numbers and the Rams steamroll to another division title, it’s going to be difficult to pay him anything less than what Wentz got. In fact, if Goff has another monster year in 2019, he’s going to have an argument that he deserves more money than whoever is at the top of the quarterback pay scale at the time.

At the very least he’ll be looking for a lot more than Wentz when it comes time to negotiate.