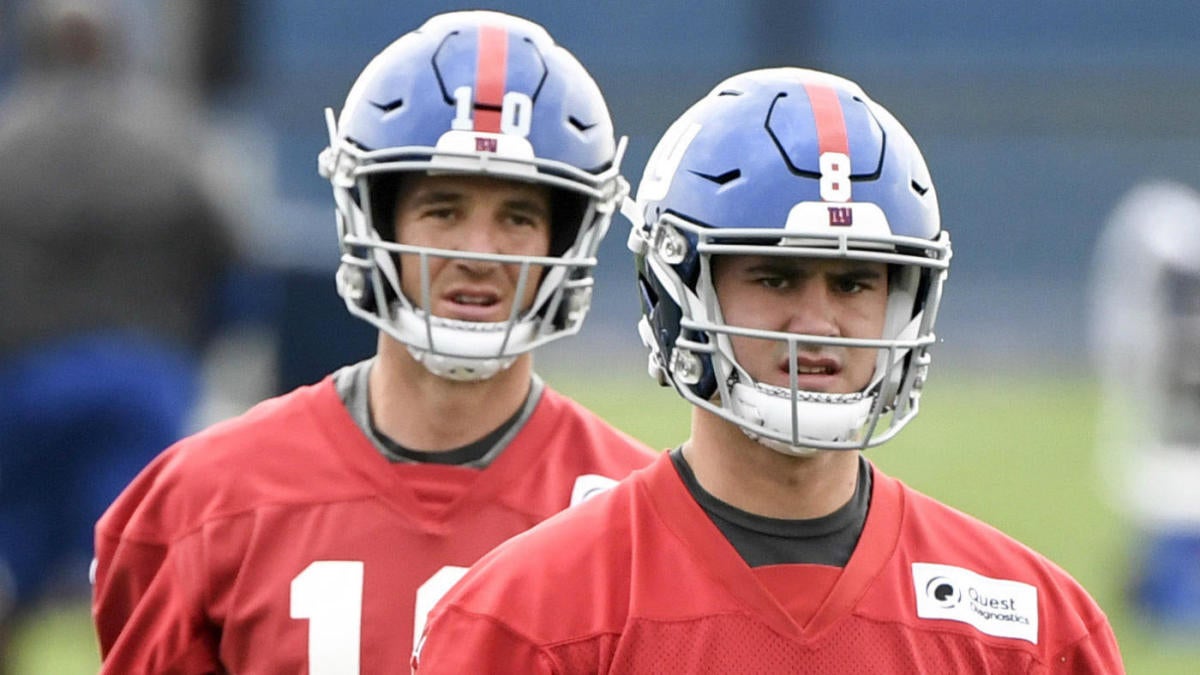 But anybody who watched the Giants’ minicamp practice Wednesday might be swayed to think differently. True, it’s only one practice in June without pads, but Jones was truly impressive throwing the football.

Word is, it’s been that way since the Giants shockingly used the sixth overall pick to take him in April’s NFL Draft.

A day after Jones wowed onlookers with his touchdown run on a read-option play, he impressed the more conventional way on Wednesday with his arm and his mind. There were several impressive plays, but the big one was a rifle shot into the middle of the field to rookie Darius Slayton that ended up being a touchdown.

Jones said after practice that the No. 1 read on the throw was to Slayton, which means he saw it, read it, and accurately made the throw. He also hit Slayton on a deep fade and hit him for a touchdown in the back of the end zone.

I asked Jones about his impressive day, and he didn’t bite. No boasts. No bragging. No look-at-me type of talk.

“I think I’ve made progress every day,” Jones said. “My challenge now is to be consistently good. I have good plays and I have bad plays, and I am trying to cut out the bad plays as much as possible.”

That’s about as much as you will get from Jones when it comes to talking himself up.  He comes off as a guy who wants to do his talking with his play. That might seem dull to many, but that’s not unlike the guy he will eventually replace in Eli Manning.

Manning is likely going to wind up in Canton in the Hall of Fame, but not for his ability to stand in front of the media. It’s not that he’s adverse to it, but rather a guy who will answer questions without giving out much information or insight into who he is as a person.

Some in New York are already labeling Jones as Eli 2.0.

“I know I am my own person,” Jones said. “I am not Eli, and I am not going to try to be Eli. But as far as someone to watch and to see how it’s done right, I think he’s a good example for that. So yeah, I think it’s complimentary considering what Eli’s done in his career in this league. He’s been great for me, really helpful. For me to just be around him and listen to him is a big benefit. I am appreciative of the way he’s helped me out so far. I think our relationship is great.”

The dynamic of the Giants’ quarterback situation is one that has played out in a lot of cities over the year: Older quarterback with skins on the wall — two Super Bowl titles in Manning’s case — coming to the end and his eventual replacement is in the same quarterback room.

Manning is still the Giants starter for 2019, but for how long? What if the Giants struggle? What if Manning struggles? Giants offensive coordinator Mike Shula said earlier this spring that Jones could play if needed this season.

The way Jones looked here Wednesday makes that statement seem not nearly as irrational as it might have when he said it.

“I see improvement from (Jones) every day,” Giants coach Pat Shurmur said. “He displays to me that he gets it and he’s becoming more comfortable with what we’re doing offensively. He’s making plays in every practice. And in our view, he’s getting better every practice.”

“He’s got a fast mind,” Shula said. “He picks things up well. You see that maturity level in him, which is one of the reasons why we got him here. The thing that has shown out that’s impressive is that if he has a bad play, an interception or a forced throw or something bad, maybe has a mental error, at least right now it doesn’t bother him. He goes on to the next play and really wants to make sure he doesn’t do it again.”

For all Manning’s easy-going ways, he was a stone-cold killer in big games in the fourth quarter, winning two Super Bowls that way. I get the sense that Jones has the same type of persona — even if he doesn’t show it. Skeptics will point to his losing record at Duke to wonder if he has it, but like I told Jones, he played with bartenders and bouncers at Duke. He wasn’t winning a lot of games with that team, no matter what he did.

Jones did play through a separated shoulder last season and then impressed the Giants enough to use the first of their two first-round picks on him in April. That led to jaws dropping and Twitter melting down.

What most didn’t realize is that the NFL personnel people liked Jones a lot more than the draft analysts did. That’s why there was the uproar. How dare a team go off-script?

When I asked Jones if was aware of his name being muddied and his draft spot being questioned, he chuckled. He knew.

“I really don’t look at that stuff much, but I am somewhat aware,” Jones said. “I certainly don’t seek it out or read it on a daily basis. That’s not where my focus is. My focus is here in the building with this team making sure I am making myself improve. I don’t read that stuff. I am in New York now, and it’s part of the job, but I certainly don’t focus on it. It worked out great for me to be here in New York.”

Gettleman took a ton of criticism for making the pick, but took even more when he said other teams in the top 15 of the draft were interested in Jones. That was indeed true, as I talked to personnel people leading up to the draft and then again after it.

Jones was tutored at Duke by coach David Cutcliffe, who also happened to be coach both Eli and Peyton Manning (coordinator at Tennessee) in college. NFL people listened as Cutcliffe raved about Jones. One NFL GM said he told his staffers at the Senior Bowl that he thought Gettleman would take Jones.

As it is now, the plan is for Manning to start this season — and Gettleman even mentioned a three-year plan to make Jones the starter. That can’t be true now considering his fast development. Manning is no football dummy. He knows what’s behind him. He once took Kurt Warner’s job way back as a rookie. So when asked about it Wednesday, Manning gave a Manning response.

“My mindset is I just have to do my job,” Manning said of having Jones behind him. “And make plays. That’s what you are trying to do.”

Jones’ ability to move around was apparent at Duke, but the Giants have been impressed with it here. His zone-read run for a score Tuesday was the talk of the practice. But that athletic ability will mean more as a thrower than a runner down the road.

The Giants haven’t had a mobile quarterback for a long, long time, maybe dating back to Jeff Hostetler in the 1990s.

“I think he has that element,” Shula said of Jones. “He’s fast with straight-on speed and he’s got good feet in the pocket. He’s a good athlete. He’s the kind of guy if you’re playing a pickup game in any sport, you are going to pick him close to No. 1.”

The Giants aren’t playing pickup games and they still picked him close to No. 1 this year. It’s clearly going to be the most-scrutinized pick in the draft when Jones does take over.

When that is, who knows?

This much I do know: That three-year plan needs to be accelerated. The Jones we saw on the practice field Wednesday will need to play sooner rather than later. That isn’t to say he should start now because Manning, contrary to popular opinion, can still play.

But 2020 could be the year Jones takes over, and when he does he will clearly be in the spotlight, which he doesn’t seem to mind.

“I never thought I’d have so many people asking me if I was doing all right after I was the sixth pick to the Giants,” Jones said. “I am excited about it. Why wouldn’t I be?”