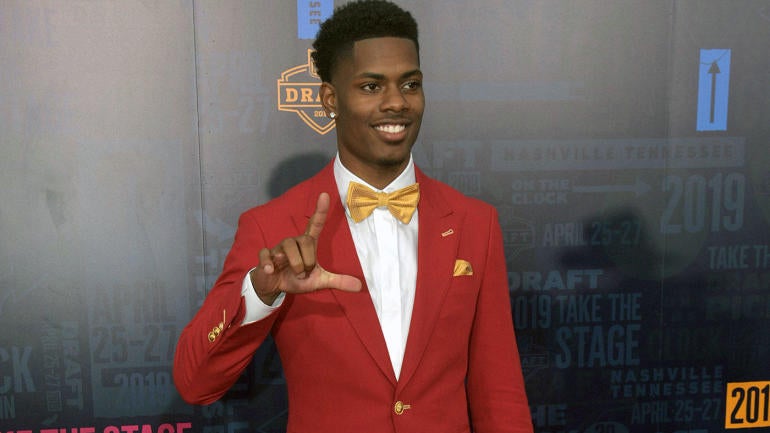 During draft season the term “fit” is so ubiquitous, you’d think every early-round pick would essentially have to land in a perfect situation.

But that’s just not the case.

Many high draft selections flop due to lack of talent or refined skill. Some don’t live up to expectations because of bad schematic fits. Sometimes a crowded position group stifles the chances of on-field development.

Let’s pinpoint bad fits among some well-known, early-round picks from the 2019 NFL Draft.

Wait, I thought this was the steal of the first two rounds of the draft? And, hold on, Trapasso, you had Williams as your CB1 and No. 6 overall prospect in the class. What’s the deal?

Per Sports Info Solutions, the Cardinals ran zone coverage right around 55% of the time in 2018, the third-highest percentage in the league, with current Browns defensive coordinator Steve Wilks calling the shots. Also, they utilized man coverage just over 25% of the time, the third-lowest figure in the NFL. Mixed coverage accounted for the remaining percentage.

And that wasn’t an anomaly. In 2017, when Wilks was the Panthers defensive coordinator, PFF had Carolina in zone a massive 72.5% of the time, the highest percentage in football.

In short, Wilks’ defense is zone-coverage based.

Williams was the premier man coverage — most specifically press man — corner in the class. He dominated close to the line of scrimmage with ultra-physical, efficient hand use and impeccable route mirroring down the field thanks to good length, fluid hips, and flexible ankles. Williams erased a lot of the competition he faced in man to man. And, frankly, I didn’t see him in zone very often at LSU in 2018.

Now he’s playing for a zone-based defensive coordinator. And sure, Wilks will say he’s going to fit the scheme to his players. Every employed coach says that. But how often will Williams be deployed in press man in Cleveland? Can’t forget the presence of 2018 No. 4 overall pick Denzel Ward, another press man corner who had a strong rookie campaign. He’s most likely the first man up to as the outside man corner in mixed coverages.

This isn’t to say Williams will be a monster bust with the Browns. It’s suggesting there’s a good chance we won’t immediately see the Williams who starred at LSU over the past two seasons, as it’ll take a fair amount of time for him to acclimate to the different responsibilities that come with playing zone.

That 20% difference is pretty sizable, and Joseph, now the Cardinals’ defensive coordinator, stated multiple times he wants to play aggressive press coverage during a February interview with an Arizona radio station.

Murphy is a zone-coverage master, and his big-play production while sinking in zone, watching the quarterback, then exploding to the football is likely the main reason he was drafted so early — No. 33 overall.

So the scheme fit is strange. Murphy didn’t rock his combine workout but plays much more fluidly while changing directions. His plant-and-drive quickness was easily the best in the class at the position and led to many of the 13 pass breakups and four picks he had in his final season at Washington.

While watching his film with the Huskies, it was pretty obvious — the team that drafts Murphy will want him dropping in zone coverage, staring at the quarterback then closing on the intended target and utilizing his stellar ball skills to create big plays for the defense.

Sure, he’ll play zone occasionally in Arizona. But Joseph is a time-tested press man coverage coach. Murphy has the on-field athletic smoothness to eventually become a solid man cornerback. But, similar to Greedy Williams, it’ll likely take a good deal of time for him to acclimate to his new, unfamiliar role at the NFL level, so we won’t see the Murphy who anchored an outstanding Washington secondary last season by mostly making his plays in zone.

It’s almost as if the Cardinals should’ve drafted Williams at No. 33 overall, and, if still available, the Browns should’ve picked Murphy at No. 46 after trading up from No. 49.

This isn’t a scheme-fit issue. It’s a playing-time concern. Although Mike Pettine’s 3-4 base system is constructed to deploy large, long defensive ends and smaller, quicker, more versatile rush linebackers on the edge, the Packers clearly have plans for hybrids on the outside of the front of their scheme, as evidenced by the signings of Za’Darius Smith and Preston Smith in free agency.

Za’Darius is listed at 6-foot-4 and 272 pounds, which is more 4-3 defensive end size, although he played in a base 3-4 in Baltimore. For as effective of a pass rusher as he is on the edge, Smith is also athletic enough to sink into coverage on zone blitzes, a major element of Pettine’s defense. Much of the same is true for Preston. He’s listed at 6-5 and 265 pounds and carried out many of the same responsibilities in Washington’s base 3-4 as Za’Darius did in Baltimore.

Each Smith will essentially — based on the finances of their respective contracts — be in Green Bay for the next two seasons at the very least, and the earliest semi-reasonable time for them to be released by the Packers is after the 2021 season.

So, that means, the 6-5, 277-pound Gary will start his career with two established, similar players on sizable contracts ahead of him on Green Bay’s depth chart. Also, fourth-year pro Kyler Fackrell mainly plays on the edge and is coming off a breakout, 10.5-sack campaign in 2018.

They say you can’t have too many pass rushers, but it terms of playing time, that’s not entirely true. Last year, Clay Matthews led all Packers outside linebackers by playing 71% of the snaps. Fackrell was on the field for 58.5% of the defensive plays. Reggie Gilbert played 45.6%. So even the Smiths account for the loss of Matthews — and first-round flop Nick Perry who’s currently a free agent — that leaves Fackrell, Gilbert, and Gary vying for what’s most likely the third-most snaps at the edge-rusher spot. And with more horses at the position this year, Pettine is primed to go even deeper with his rotation at the position in 2019 — and beyond — spelling even more of an uphill climb for Gary to find substantial playing time in the few first years of his rookie deal.

In May, I listed Gary as one of the rookies in need of a redshirt season mainly due to his rawness as a pass rusher. And there’s a good chance he’ll be pushed into a redshirt type of debut NFL season then enter his second season in a crowded edge-rusher room in Green Bay once again, thereby making it difficult for him to live up to the expectations that come with being the No. 12 overall selection in the draft.