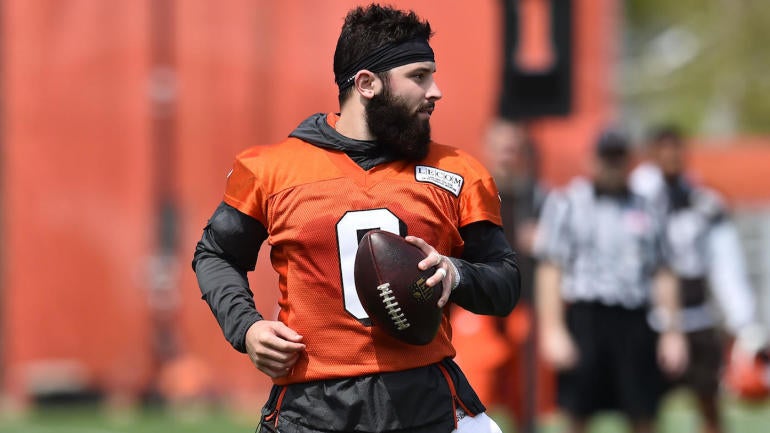 From a talent standpoint, the Cleveland Browns don’t just have the look of a playoff team. They also appear to be worthy of Super Bowl consideration. The biggest question that remains is, can the Browns deal with expectations for the first time in what feels like forever without combusting internally?

We won’t know the answer to that question until the season starts in September, but there already could be some turmoil brewing in Cleveland. It turns out, second-year quarterback Baker Mayfield doesn’t sound happy about the trade request that running back Duke Johnson initially made earlier this offseason and maintained at mandatory minicamp on Tuesday.

“You’re either on this train or you’re not,” Mayfield said, per Cleveland.com’s Mary Kay Cabot.

When he was asked if the situation has led to any form of awkwardness, Mayfield shook his head and said, “It’s self-inflicted. It is what it is. It’s not awkward for anyone else in this building.”

He was then asked if he supported Johnson as a teammate. Mayfield responded, “He’s gotta do his job. He said he’s a professional. I hope he does his job.”

To this point in his career, Johnson has done exactly that. While Johnson skipped voluntary OTAs (like Odell Beckham), he did show up for mandatory minicamp on Tuesday. He’s also been a productive player throughout his career. While he’s never operated as the team’s feature back, he has averaged 864 yards from scrimmage per season since he entered the league in 2015.

of 62 RBs on early down rushes+targets past 3 yrs.

Johnson can help a team. He can also help the Browns. The problem is, he won’t find as many opportunities to contribute in Cleveland.

In addition to drafting RB1 Nick Chubb last year, the Browns also signed Kareem Hunt in February after the Chiefs cut him in the aftermath of the release of a disturbing video that depicted Hunt shoving and kicking a woman. Hunt has been suspended for eight games, but figures to take on a prominent role in the Browns’ backfield once he’s eligible to return, which would limit Johnson’s touches from that point on.

The Browns, though, have maintained all along they have no interest in trading Johnson. They did so again on Tuesday.

“He wants to be traded. I want to win the lottery. It doesn’t matter,” said Browns coach Freddie Kitchens, per NFL Network’s Aditi Kinkhabwala. “He’s under contract. He’s a Cleveland Brown. He’s going to be used to the best of his ability in what benefits the team.”

Given Hunt’s suspension, their stance makes sense. If anything, they could look to move Johnson before the trade deadline when Hunt is nearing a return. They could also just decide to keep him all season long as a luxury player and depth behind Chubb and Hunt.

But it’s also understandable why Johnson wants out. He already saw his touches decrease last season. In 2017, Johnson turned 156 touches into 1,041 yards and seven touchdowns — the best output of his career. But this past season, he garnered only 87 touches, which he turned into 630 yards and three touchdowns. He actually averaged more yards per touch in 2018 than he did in 2017 (7.2 compared to 6.7), but he just didn’t get enough opportunities. He’s probably craving a situation that would result in an substantial uptick in his usage.

As for Mayfield’s reaction, it’s understandable from the sense that he doesn’t want to be worrying about any unnecessary distractions as the team tries to break their playoff drought. But it was still a little surprising to see him bypass the chance to support his teammate the way Browns receiver Jarvis Landry did when he was asked to comment on the Johnson situation.