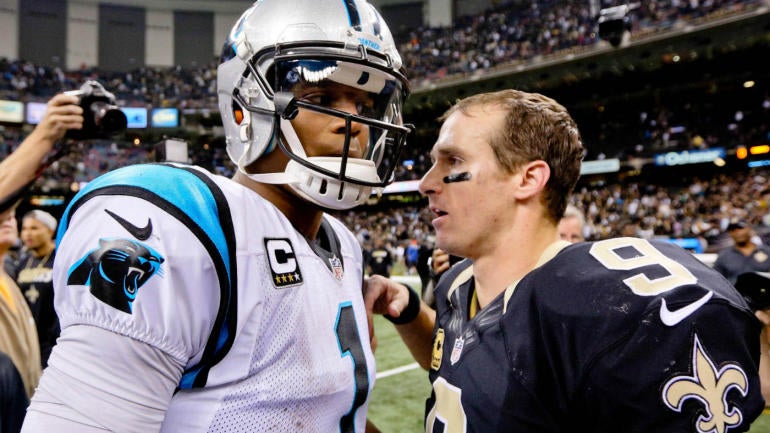 Last year we went team-by-team with these picks, but this year we’ll be going back to the divisional format I used in 2016 and 2017. If you hate any picks, love any picks or have better ideas, leave them in the comments or yell at me on Twitter @WillBrinson. You can also get an audio breakdown of all these divisions on the Pick Six Podcast, as we run through each division on our DAILY NFL PODCAST over the next few weeks. Listen to the latest episode breaking down the NFC South and the Carolina Panthers with Jourdan Rodrigue of the Charlotte Observer in the player below.

This is a hefty number, even for a loaded team like New Orleans. But do you really want to bet against Drew Brees and Sean Payton? After a trio of 7-9 seasons, the Saints struck gold with their 2017 draft class and have won 24 games since, magically improving the defense almost overnight. They are one of the steadiest NFL powers over the last two years, with an offensive pedigree that extends back more than a decade. Brees is the only real question mark: his arm strength seemed noticeably sapped down the stretch during the 2018 season — in his final four games of the season (Brees did not play in Week 17), he threw just three touchdowns and three interceptions, completed less than 70 percent of his passes (ha) and averaged less than seven yards per attempt (hmm). Assuming there isn’t a huge fall over a cliff this year, we can probably chalk it up to being dinged up or just fatigued. But it warrants watching as the season gets deeper. The rest of the offense should be fine. Alvin Kamara is a superstar already. The lack of Mark Ingram concerns me a little, but Latavius Murray is a nice supplement. Michael Thomas could be the best receiver in football. Tre’Quan Smith flashed big last year for stretches. Max Unger’s retirement is another low-key concern when it comes to this offense, but this should still be a very good offensive line. Defensively, the Saints might be loaded. They were 11th in DVOA last year after finishing eighth overall in 2017. Weird how that translates to wins. This schedule concerns me though. The Saints are on the road twice in the first three weeks against studly teams (@ Rams, @ Seahawks) and then play stout defenses on the road (@ Jaguars, @ Bears) in Weeks 6 and 7. If they go 3-1 in those games, they’ll shatter this win total. Considering they outperformed their win projection by almost two full wins last season and have some concerns with transition, I’ll lean the other way.

I cursed this team last year with my warlock-like powers and for that I am truly sorry. I’ll pick someone new to put a curse on next year. Maybe that’s why the Falcons didn’t bother upgrading their defensive depth; they know I can’t ruin their defensive stars again. In truth, the Falcons were one of the luckiest teams in football on an injury basis in 2017 and just middle of the pack last year, according to Football Outsiders Adjusted Games Lost metric. The Falcons had the win profile of just under an eight-win team, so they certainly underperformed/got unlucky from that perspective, but the presumption that they have to be healthier this year because some defensive stars got injured is a faulty one. Here’s the other problem: this defense has never really been that good. The top finish for Atlanta the last four years? 22nd in DVOA. I like the players Dan Quinn has and think he’s a good coach. The defense has improved over the course of multiple seasons, but it’s never been good for a full season. I thought it would happen last year and Atlanta’s D cratered with injuries. Vic Beasley, Grady Jarrett, Deadrin Senat and Takkarist McKinley is a strong front four. Deion Jones being back and healthy is critical. Same with Keanu Neal in the secondary, where Desmond Trufant and Isaiah Oliver could develop into a nice set of corners on the outside. Offensively, this is a loaded team. Matt Ryan is great and has Dirk Koetter, a familiar face, as his OC. Julio Jones and Calvin Ridley is off-the-charts dangerous. Austin Hooper is underrated and Devonta Freeman should be healthy. Adding Chris Lindstrom and Kaleb McGary gives them talent all over the line. But boy do they need a hot start. The Falcons open up against the Vikings (road), Eagles (home), Colts (road) and Titans (home). That’s tough. Then they get the Texans (road), Cardinals (road), Rams (home) and Seahawks (home). Sitting at 4-4 heading into the Week 9 bye without having played a single divisional game wouldn’t be out of the question at all. I’m having them squeak by here but wouldn’t want to bet it; 8-8 could absolutely happen.

Remember, these lines move frequently. The Panthers shifted by a half game over the last week or so, dropping off the eight mark. It’s odd because there’s been good news about Cam Newton’s shoulder — I discussed that with Jourdan Rodrigue of the Charlotte Observer in the podcast above — and I wouldn’t be surprised if it moved back up to eight after the Gerald McCoy signing. There’s a lot to like about this defense, with the additions of McCoy, Bruce Irvin and Brian Burns. Ron Rivera is going to be extremely creative with how he operates and it could do some damage. Ultimately it all comes down to Cam. This team was 6-2 last year before he fell off a cliff and they got destroyed by the Steelers on Thursday Night Football in Pittsburgh. They finished 7-9 and everyone nearly got fired. Norv Turner’s offense was exceptional and the pieces are there, with Cam and Christian McCaffrey and D.J. Moore and Curtis Samuel and Greg Olsen, for this to be dangerous again. It all falls on Newton’s arm. If he’s healthy, their schedule is pretty good — home games against the Rams and Bucs to open aren’t lock wins, but they’re winnable games. They get the Cardinals and the Texans on the road next, then the Jags at home and the Bucs in London before their Week 7 bye. I would think 3-3 is the floor there with a healthy Cam, and there’s some serious upside. McCoy gets his old team twice in the first six weeks! He’s coming out HOT. For now, with the total dipped a bit and some optimism surrounding Cam, I’ll be optimistic.

A team that spent all last season flip-flopping between Ryan Fitzpatrick and Jameis Winston underperformed its expected win total by 1.5 games and got everyone fired. The 2018 Buccaneers were a wild rollercoaster ride. Whether or not you like them this season depends on whether you believe Winston can finally take the step everyone’s expected under Bruce Arians. There’s reason to believe, since Winston is the ultimate No Risk It, No Biscuit quarterback. Is Ronald Jones going to be good running the ball? Or can someone else step up? Mike Evans and Chris Godwin are a very nice combo at wide receiver and even if Arians doesn’t typically use his tight ends, it’s hard to imagine O.J. Howard getting no run (it would ruin a lot of fantasy teams fueled on hype). Defensively it’s harder to get excited, although Todd Bowles does typically extract plus production out of lower-end talent. Who’s rushing the passer here? Jason Pierre-Paul will be out for a while. They have Noah Spence, Carl Nassib and Shaq Barrett and can generate some pass rush out of formational versatility maybe. Linebacker, with Devin White, Lavonte David and Kevin Minter (scheme familiar), could be a strength. Arians says the secondary is fixed and there’s top-end talent in terms of where guys were drafted, but let’s see it happen first. My biggest concern is the brutal schedule. The 49ers (home), Panthers (road), Giants (home), Rams (road), Saints (road) and Panthers (London) is a ROUGH schedule out of the gate. It’s not even July and those 49ers and Giants games are must wins. Two road games out of the bye (Titans, Seahawks) doesn’t make life much easier. Unless they jump out to another surprising start or unless Arians just morphs Jameis into an MVP candidate, I have trouble seeing them crack through the barrier. 6.5 is super low, though, so I wouldn’t actually bet on the under.