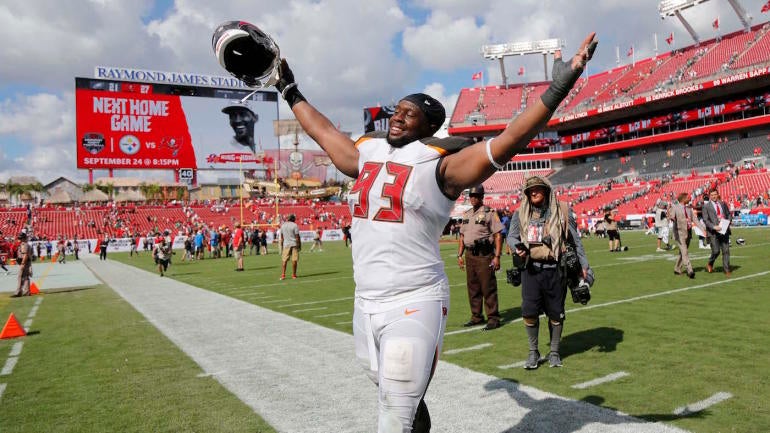 After taking the weekend to think things over, Gerald McCoy has finally decided where he’s going to play in 2019.

According to ESPN.com, the NFL‘s top free agent has decided to sign with the Carolina Panthers. McCoy has agreed to terms on a one-year deal that’s worth up to $10.5 million and includes a $4 million signing bonus. Here’s a look at the full terms of the deal.

The Panthers made room for McCoy’s deal by making several moves over the past week, including a restructured contract for Torrey Smith. The Panthers also released Matt Kalil with those two moves freeing up nearly $9 million in cap space.

The contract with the Panthers ends a frenzy for McCoy’s services that started on May 20 after the Buccaneers decided to cut ties with the six-time Pro Bowler. The defensive tackle was scheduled to count $13 million against the Bucs’ salary cap in 2019, which was a number that Tampa just couldn’t afford. Before cutting him, the Bucs tried to trade him away, but they couldn’t find a partner willing to take on his huge contract.

Once McCoy hit the free agent market, more than 25 percent of the NFL expressed interest in the defensive tackle with the Ravens, Bengals, Falcons, Patriots, Browns, Colts, Panthers and Saints all hoping to to add McCoy.

Despite all the interest, McCoy decided he was only going to visit with three teams: The Browns, Ravens and Panthers. The 31-year-old said his two main criteria for selecting his new team was that he wanted to play for a contender and that he wanted to be comfortable with the coaches and players.

After visiting with the Browns (May 24) and Ravens (May 29), McCoy’s final visit during his free agency tour came with Carolina on Thursday, and after the defensive tackle eventually left town on Friday, Panthers coach Ron Rivera thought his team had a good chance at landing the veteran.

“I thought it was received very well,” Rivera said Monday, via the team’s website. “Gerald is a solid football player, a guy we most certainly are interested in and that we’d love to have here and be a part of what we’re doing. But he’s going through the process, so we’re just waiting patiently to see what the outcome is going to be. I think we’ve got a good chance — as do the other two (teams). They’d probably tell you the same thing.”

Although McCoy was high on the Ravens after leaving Baltimore, the Panthers apparently “wowed” him on his visit, which included some heavy recruiting by Cam Newton, according to ESPN.com.

The Panthers also had one big advantage that the two AFC North teams didn’t have: They’ll be able to give McCoy a chance to get some payback on the Buccaneers.

McCoy’s decision to sign with Carolina was likely somewhat motivated by revenge and that’s because Buccaneers coach Bruce Arians made it pretty clear that his team had no use for McCoy. Not only did the Bucs end up releasing him, but Tampa added insult to injury by giving away McCoy’s number before the ink was even dry on his pink slip. McCoy, who had spent his entire nine-year career with the Bucs, wore No. 93 during his time in Tampa, but that number will now be worn by Ndamukong Suh, who was given the number on Monday.

By signing with the Panthers, McCoy will now get to face his former team twice this season, with the first game coming in Week 2 and the rematch coming during a Week 6 trip to London.

Basically, the Panthers are getting a player who should be highly motivated to succeed in 2019. Not only will he be out for revenge, but McCoy will also be looking to have a huge season since he’ll be able to hit free agency again in March 2020.

Although McCoy is on the wrong side of 30, he has been highly productive over the past few years. The defensive tackle tallied six sacks in 2018, marking the seventh straight year that he’s racked up five or more sacks in a season. McCoy, who was selected with the third-overall pick in the 2010 NFL Draft, will join four other former first-round picks on the defensive line in Carolina.