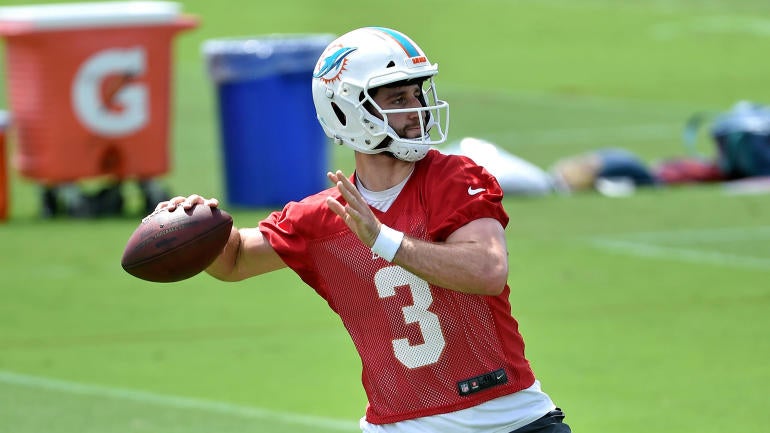 From Mike McCoy to Byron Leftwich to Kliff Kingsbury to Chad O’Shea, Josh Rosen has already been forced to work under a dizzying assortment of offensive coaches during an NFL career that began just over a year ago.

The 10th overall pick of the Cardinals in last year’s draft, Rosen started with McCoy as his offensive coordinator before the team replaced him with Leftwich midway through the season. In his first full NFL offseason, Rosen started learning Kingsbury’s offense after the Cardinals hired him as their new coach, but a mid-draft trade that sent Rosen to the Dolphins already has Rosen working in a new offense under O’Shea, who arrived in Miami from New England along with new coach Brian Flores.

So, it should come as no real surprise to hear that Rosen is dealing with what he called “a steep learning curve” as he tries to master yet another offense. As Flores recently put it, Rosen still has “a lot to learn.”

“He’s smart,” Flores said, per The Palm Beach Post. “He’s got a big arm. He’s talented. He’s got some leadership ability. But he’s got a lot to learn. There’s no doubt about that.

“This offense, it’s not an easy one to learn. There’s something new every day. He’s improving, he’s getting better every day. I like that.”

The Dolphins acquired Rosen from the Cardinals hoping he’d become the franchise quarterback they’ve been searching for since the days of Dan Marino, but at this point, it’s not clear if Rosen will even be the team’s starter when the season rolls around. Before trading for Rosen, the Dolphins signed journeyman Ryan Fitzpatrick as a bridge starter. At the time, it wasn’t clear where that bridge was leading to. Now, we know Rosen is the eventual destination.

But Fitzpatrick might get the chance to begin the season as the starter. As ESPN’s Cameron Wolfe noted last week, it’s Fitzpatrick who’s been getting the majority of first-team reps so far.

Obviously, there’s still a long ways to go. Fitzpatrick signed in mid-March. So he’s had longer to absorb the new system. It wouldn’t be entirely shocking if Fitzpatrick, who is entering his 15th NFL season with his eighth NFL team, has had an easier time picking up a new offense. By now, he’s certainly more used to the process. With mini camp, training camp, and the preseason remaining, there’s still plenty of time for Rosen to catch up and overtake Fitzpatrick as he tries to prove his rookie year struggles in Arizona were more about the situation around him than his ability to play quarterback in the NFL.

Eventually, he hopes to be able to do what Tom Brady does in a similar type of offense. But he’s still in the beginning phases of that process.

“They just put a lot on the quarterback,” Rosen said of the offense. “Operationally, when all of the responsibilities are sort of under one roof and it’s all under the quarterback, once you do get it down, you can go very quickly. But the thing is, you have to get it down and I’m in that process.

“You see Tom (Brady) at the line of scrimmage and he’s orchestrating traffic and he’s doing everything super fluidly because he’s been in the offense for so many years. You can only kind of hope to get somewhere close to that fluidity. But yeah, this offense puts a lot on the quarterback and it’s a challenge that I enjoy.”

With the Cardinals, Rosen completed 55.2 percent of his passes, averaged 5.8 yards per attempt, threw three more interceptions than touchdowns (14-11), and posted a 66.7 passer rating. So, while learning a new and complicated offense might be arduous, it’s probably a process that Rosen is happy to endure.