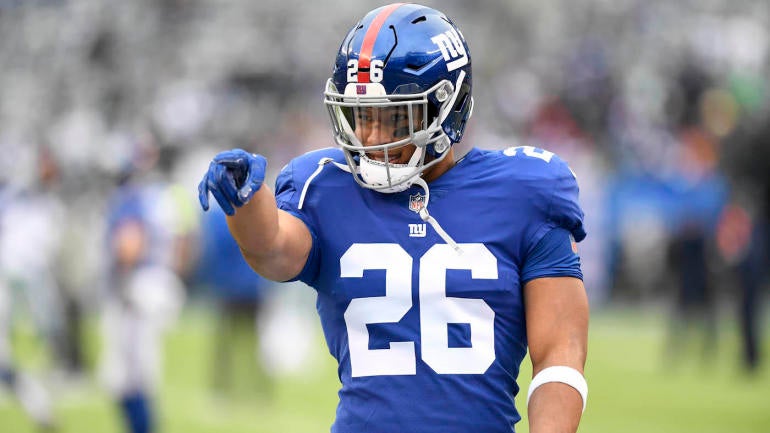 Depending on who you ask, the Giants either made one of the best picks or one of the worst picks in the NFL Draft this year when they decided to use the sixth overall pick on former Duke quarterback Daniel Jones.

If you ask Giants general manager Dave Gettleman, the pick was a steal.

On the other hand, everyone else seemed to hate it. A big reason many people viewed it as a bad pick is because there was a general feeling that the Giants reached for Jones. Basically, they took a guy who probably would have been available when they selected again in the first round at 17th overall.

Since making the pick, the Giants have been panned by anyone and everyone, from fans to media to random people on Twitter. One person who’s been reading those criticisms is Giants running back Saquon Barkley, and although Giants fans might not be happy with Jones now, Barkley is convinced that fans will like him in the future, you know, after he matches Eli Manning in Super Bowl wins.

“We love the media, we love Twitter and Instagram, but everyone’s going to say something,” Barkley said of the criticism, via SNY.tv. “Right now, ‘Oh, you’re an awful pick,’ but when he wins two Super Bowls, everyone’s going to be like, ‘Oh, he was the greatest pick of all time.’ That’s just how life works.”

Barkley is definitely right about one thing: If you win, then fans will like you more. But mentioning two Super Bowl wins might be a bit much. As a matter of fact, Giants fans would probably embrace Jones if he could win a single playoff game, which the team hasn’t done since they beat the Patriots in Super Bowl XLVI back in February 2012.

Winning multiple Super Bowls might seem like a lofty goal, but it’s a goal that Jones isn’t backing away from. Although most rookies don’t usually talk much about winning Super Bowls during their first offseason with a team, that was one of the first things Jones brought up during his first interview after the Giants held their rookie camp in early May.

“I think the goal is certainly to win Super Bowls,” Jones said on May 3, via the New York Post. “There’s no doubt about it, that the goal, to win multiple Super Bowls, like Eli has. I’m looking forward to that.”

Even though Jones wasn’t a popular pick with fans in New York, the criticism from the outside doesn’t seem to be bothering him. According to Barkley, the team’s rookie quarterback has been able to block out the noise.

“I’m happy for him, proud of him,” Barkley said. “He’s done a really good job of blocking out the noise already and I think that’s important to have, especially being a quarterback in the New York. When his time comes, I think he has a bright future.”

Although Jones is expected to be the Giants’ backup quarterback behind Manning in 2019, he’s apparently already starting to win over the team’s offensive players.

“Daniel Jones went crazy [on Friday] in practice. I mean, he had himself a day. I believe in him,” Barkley said. “He’s in the perfect position. You get to come to New York, just be behind Eli, a two-time Super Bowl MVP, a quarterback who does everything right, who is a leader and captain. When his opportunity comes, he’s got has to be ready for it.”

If Jones keeps going “crazy” in practice, his opportunity might end up coming sooner rather than later. For now, it seems that Jones is content learning from Manning and mimicking everything the Giants’ starter does.