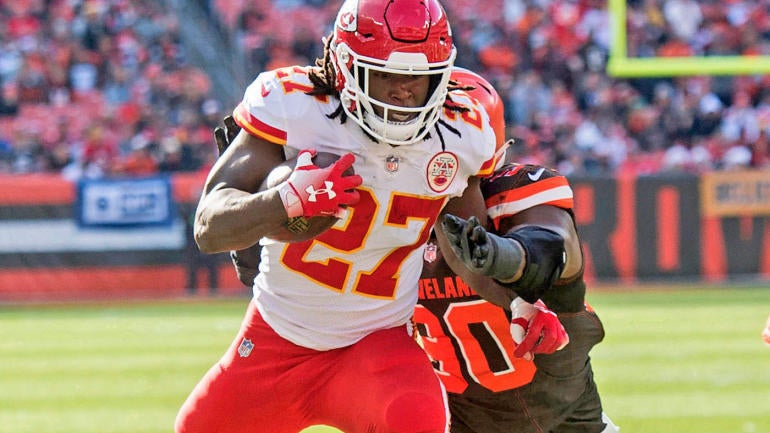 The Browns signed Kareem Hunt in February, less than three months after he had been released by the Chiefs for his off-field actions, including a violent incident at a hotel that was captured on video. In March, Hunt was suspended eight games by the league, and on Wednesday the running back spoke to reporters for the first time since coming to Cleveland.

“[Browns general manager] John Dorsey knows me very well and he actually drafted me in Kansas City and we had a real special connection and he knows the type of person I am and that wasn’t me,” Hunt said, via Cleveland.com’s Mary Kay Cabot. “I mean, I definitely made a mistake and I apologize for it once again. And I told him I’m going to move forward and become a better person.”

Before Dorsey joined the Browns in 2017, he served as the Chiefs general manager from 2013-16. The man who drafted Hunt echoed the running back’s remarks back in February.

“My relationship and interaction with Kareem since 2016 in college was an important part of this decision-making process but we then did extensive due diligence with many individuals, including clinical professionals, to have a better understanding of the person he is today and whether it was prudent to sign him,” Dorsey said at the time. “There were two important factors: one is that Kareem took full responsibility for his egregious actions and showed true remorse and secondly, just as importantly, he is undergoing and is committed to necessary professional treatment and a plan that has been clearly laid out.”

Hunt spoke on Wednesday about earning trust, not just with the Browns general manager but the entire organization as well.

“I told [Dorsey] ‘You can trust me,'” said Hunt. “I’ve got to earn his trust, and I’ve got to earn everybody’s trust in the whole organization. I’m not willing to mess that up.”

And it doesn’t sound like there will be a second chance.

“[Dorsey] stressed to just stay positive and don’t make those same mistakes twice,” Hunt continued. “I live by that on the field, too. I make a mistake on the field, I’m not going to do it again. I’m going to learn from it and just move forward.”

Hunt has apologized for his actions but conceded that he hasn’t spoken to the victim he assaulted in February 2018.

“I have not, but if I was to see her I would like apologize to her face,” Hunt said. “But I have not had the chance to do that.”

“They speak very highly of him,” Mayfield said, via TMZ.com, continuing, “So, I think that’s really important, and it’s been pretty important for him to be here too.”

Hunt won’t be cleared to play until Week 10 when the team hosts the Bills (the Browns have a bye in Week 7), but he’ll be prepared when the time comes.

“Whenever I get the opportunity to play or not, I’ll be ready,” he said.

According to Vegas, the Browns are 16-to-1 to win the Super Bowl. For an idea of how crazy that is, consider this: the team hasn’t had a winning record since 2007, hasn’t made the playoffs since 2002 and hasn’t won a postseason game since 1994, back when Bill Belichick was the coach, Vinny Testaverde was the quarterback, and before the franchise packed up for Baltimore.