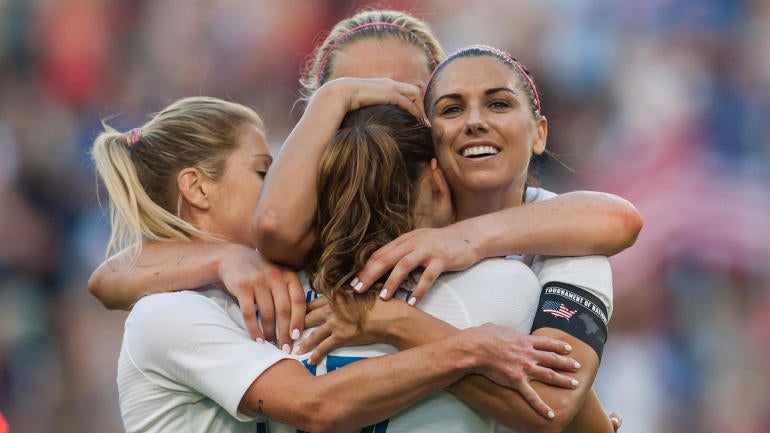 The United States women’s national team has set its roster for the 2019 Women’s World Cup this summer in France. Thursday, coach Jill Ellis announced the 23-player squad the USWNT will carry as it tries to defend its World Cup title. It doesn’t feature a whole lot of surprises, but it is loaded with experience, especially in the final third. Here is the full roster and what to know:

“Selecting a World Cup team is a long process, and I want to thank the players – the ones that made the final team and the ones that didn’t – for all of their hard work over the past two and a half years,” Ellis said in a press release. “They all pushed each other in every training session and every game and challenged the coaches to make some tough decisions. These 23 players have been through adversity and success, and it’s a group that has the talent, confidence, experience and desire to help us win the World Cup.”

The big, usual names are there as the attack is loaded with Heath, Lloyd, Morgan, Pugh and Rapinoe. There will be no shortage of options off the bench in attack, while the midfield and defense is also experienced. This is a team that has more strengths than weaknesses, and it’s a squad filled with players who have won a World Cup and know what it takes.

The U.S. has been trying to settle on a goalkeeper ever since the Hope Solo fiasco ended. Harris and Naeher are going to be in their second World Cup, with Naeher likely the starter. While Harris has 21 caps, Naeher has represented the national team 43 times.

One decision that has made some noise is Brian, who was a big part of the squad when it won the 2015 Women’s World Cup. She has dealt with injuries and really hasn’t been part of the squad for quite a while now. When in top form, she is one of the best. Some may see the move as a bit of a gamble, but there’s no denying her quality. As with any World Cup roster, there are some who don’t even get to sniff the field during these games, so at worst, Brian doesn’t play if Ellis doesn’t see what she needs to see. If she is ready to go, she makes this team better, and the expectation is that she’ll play plenty.

In addition to Brian, Krieger is a surprise for some as well. At 34 years of age, she played her 99th match with the team in early April after more than a two-year absence. She has dealt with lots of injuries in the past, but she was a big part of the 2015 World Cup team and could be key off the bench in place of Kelly O’Hara.

The U.S. opens up play in the tournament against Thailand (June 11), before facing Chile (June 16) and Sweden (June 20) to wrap up group stage. The U.S. won the 2015 World Cup for the national team’s third world title.

How do watch on TV, stream online

David Beckham’s signing with Galaxy made lasting impact on MLS

Soccer on TV: Liverpool will attempt to break many records