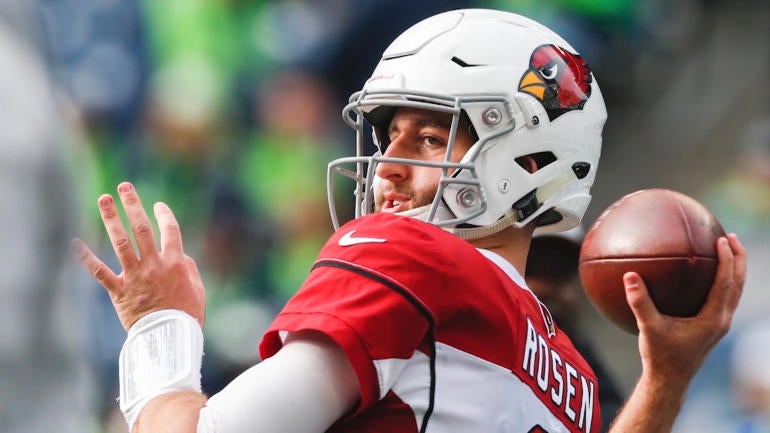 The Josh Rosen saga is close to ending and it could happen in quick fashion, with the Cardinals reportedly set to deal the former first-round pick to the Dolphins shortly before the beginning of the second round of the 2019 NFL Draft.

Arizona is on the clock right now with No. 33 overall (the draft kicks off at 7 p.m. ET and we’ll be doing pregame and live coverage on CBS Sports HQ starting at 6 p.m. ET so fire up your favorite app and watch) but it might have an extra second-round pick soon, as Mike Florio of Pro Football Talk reports that the Dolphins are sending No. 48 overall to the Cardinals for Rosen.

That would be a haul for Arizona, all things considered. Mike Garafolo of NFL Network reports there could be something else coming back to Miami in the deal, as the Dolphins believe they’re giving up too much with just that second-round pick considering Rosen’s current market value.

Rosen, of course, became expendable once the Cardinals decided to make Kyler Murray the first-overall pick. The Cardinals submarined their leverage by taking Murray, and really hurt themselves by making the curious decision to not start talking trades with other players until 8 p.m. ET on Thursday, when they actually got on the clock.

With the Giants (Daniel Jones) and Redskins (Dwayne Haskins) both drafting quarterbacks, the market for Rosen shrunk even more rapidly once the draft began.

Miami was really the only team left standing that would make sense for Rosen.

This would be a nice move for them too. Getting Christian Wilkins in the draft, a selection that Pete Prisco believed was the best pick of the first round, and following it up by landing Rosen with their second-round pick would put them in a pretty good position to build out their roster for the long haul.

Rosen would be the presumed “franchise quarterback” in Miami, but if he didn’t pan out, there wouldn’t be the same pressure as him being a first-overall pick by Miami. They could dip back into the draft in 2020 or 2021 with no pressure at all. In fact, if the Dolphins are eyeing a future quarterback, Rosen is a perfect bridge/excuse to hold off on drafting one next year and pushing it back until 2021 rather than forcing things.

We’ll see how this plays out in real time as the draft gets closer, but this would be a big bonus for Rosen to find a home this quickly and a huge sigh of relief for the Cardinals to get Rosen out of town while getting some compensation in return.

It makes too much sense not to hammer out a deal at this point.