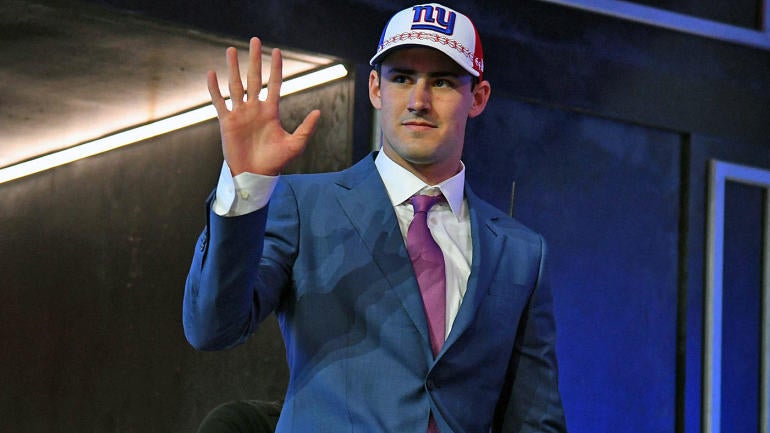 The Giants curious draft got more curious on Thursday night after the draft, when Dave Gettleman took the podium for his customary post-draft press conference and explained that Daniel Jones could ultimately end up sitting behind Eli Manning for three years.

Uhhhhhhhhhhhhhh what? This was not a mistake. Gettleman was asked by reporters if drafting Jones at No. 6 overall changed the plan for Eli, who was recently extended by New York, and Gettleman said not in the slightest.

“Absolutely not. Absolutely not. Maybe we’re going to be the Green Bay model, where Rodgers sat for three years,” Gettleman said. “Who knows? It’s one of those deals where it doesn’t make a difference what the position is, you can never have too many good players at one position.”

At this point in time, other reporters were — rather understandably — apoplectic at the idea of the sixth pick in the draft being on the bench for three full seasons. Gettleman responded by saying that he might get hit by a car?

There was another follow up to that question — also rather apoplectic — with reporters sort of in shock that the Giants would want to have both Jones and Manning on the roster for three years. Or, as Gettleman acknowledged, why not wait until No. 17 to take Jones. His response? Life is “too short.”

“It’s the same conversation, why didn’t you wait until 17? We don’t know. Life’s too short,” Gettleman said. “You don’t know how this is going to work. So, again, it’s people drafting defensive tackles when they already have two stud starters.”

Except it’s not the same thing. You can rotate three defensive tackles. You can’t rotate two quarterbacks. Look, I get it. I understand why the Giants decided to take Jones, because you need to find the next guy to replace Manning. If Jones is the guy and you don’t believe he’ll be there at No. 17 or think it’s 50/50 that won’t last, you need to pull the trigger on him and guarantee you land the guy who is the top quarterback on your board.

Piling on the Giants feels too easy right now. Are we all missing something? Is Jones great because he played for the guy who coached the Manning Brothers? Can he sit for a year, develop in a system and then actually produce in his second year. Jones is a talented player.

Sixth overall just feels too high. If he sits for three seasons behind Eli Manning it’s almost certainly the case.