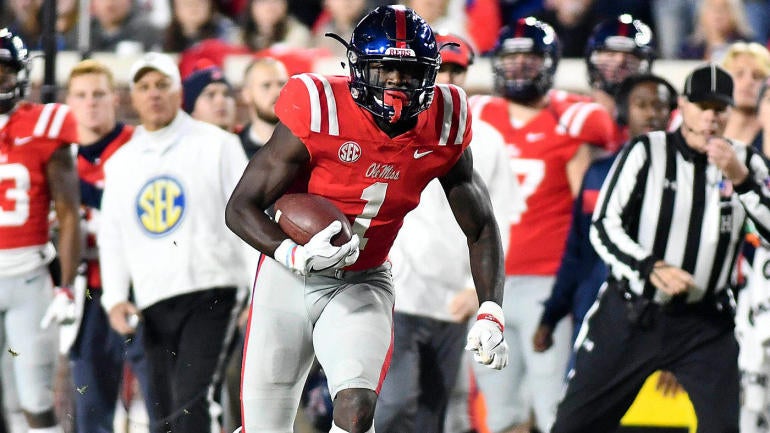 With the No. 51 pick in the 2019 NFL Draft, the Titans selected A.J. Brown, wide receiver out of Ole Miss. Worked primarily from slot until D.K. Metcalf was lost to injury. Brown ran a lot of in-breaking and comeback routes in simplified Ole Miss passing offense. Good at finding soft spots in zone coverage and a strong after-the-catch runner. Efficient out of breaks, a long-strider who takes a while to get up to top speed, Brown sometimes struggles with press-man coverage, especially against bigger cornerbacks.

Pete Prisco: He’s a better receiver than D.K. Metcalf. I like this kid, I think this is a good pick. The Titans have to do everything in their power to make Marcus Mariota better, he has to get better, so why not give him another weapon, allow him to throw the football, be better throwing the football, be more productive.

Dave Richard: This pick has a chance to be money for the Titans, but it’s dependent on a bunch of things. Brown was a slot specialist at Ole Miss, doing most of his damage lining up near the big guys and taking defensive backs behind the woodshed with a polished route-running skill set. I’m not sure if the Titans view Brown as a Day 1 slot guy, particularly since they just signed Adam Humphries to a nice contract this offseason. And, it might not matter because Marcus Mariota hasn’t been a king-maker for his receivers through four seasons. So it’s kind of heartbreaking to see Brown end up with the Titans. Until we get a better idea of what role he’ll play, he’s just not quite worth taking in seasonal leagues. Those with an eye toward the long-term can go after Brown with a late-round pick in dynasty start-ups and a late first-round pick in rookie-only drafts.

Chris Trapasso: Smith-Schuster received the second-most targets from the slot in football last season (112), per Sports Info Solutions, and like the young Steelers star, Brown should land as a big (athletic) slot option in the NFL, no longer a part-time gadget or novelty item. Brown has 4.49 speed but specializes after the catch, when he instantly morphs into a running back. He’s also reliable in contested-catch situations. Brown is the most NFL-ready receiver in this class.

Ryan Wilson: A four-star recruit coming out of high school in Starkville, Mississippi, Brown was also a prized baseball recruit, who was drafted in the 19th round by the Padres. Brown played in 12 games as a freshman and had 29 receptions and two touchdowns. As a sophomore in 2017, he had 75 catches for 1,252 yards and 11 scores, and followed that up last season with 85 catches for 1,320 yards and six touchdowns.

Among all FBS wide receivers, Brown ranked 12th in Pro Football Focus‘ slot receptions metric and was 13th in slot yards. He was 14th in yards per route run.

Ryan Wilson: Brown worked primarily from slot until D.K. Metcalf was lost to injury. Brown ran a lot of in-breaking and comeback routes in Ole Miss’ simplified passing offense. He was good at finding soft spots in zone coverage and a strong after-the-catch runner. Brown is efficient out of breaks, a long-strider who takes a while to get up to top speed, but a high-volume receiver who controls the middle of the field.

And don’t think of him as just a slot receiver running underneath routes; he can get deep too:

Ryan Wilson: Brown sometimes struggles with press-man coverage, especially against bigger cornerbacks. He also needs to be more consistent as a blocker and he has struggled with concentration drops at time. That said, Brown excels at the contested catch: