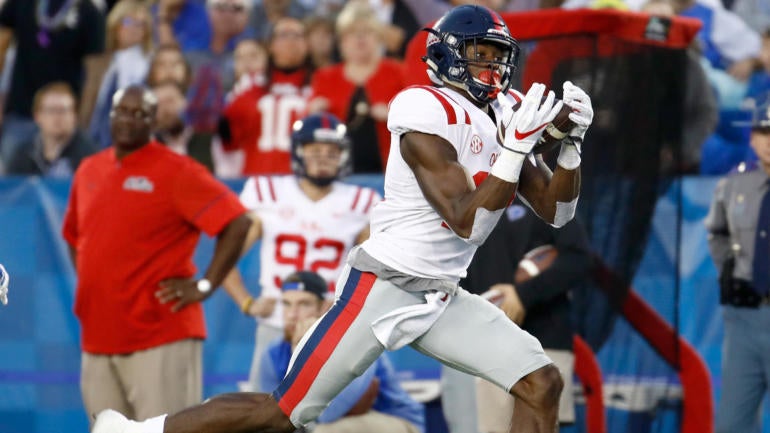 With the No. 64 pick in the 2019 NFL Draft, the Seahawks traded up to select D.K. Metcalf, wide receiver out of Ole Miss. Eats up cushion against cornerbacks and despite poor shuttle and 3-cone drills at the combine, routinely shows the ability to put the foot in the ground and get and out of breaks. He’s good at creating separation with shoulder fakes and blazing speed (4.33 40). Also displays soft hands when hauling in long arcing throws, can high-point the ball on fade routes and has strong hands to fight off physical cornerbacks for the ball.

Pete Prisco: He looks like Julio Jones, but he doesn’t play like Julio Jones. Where is the productivity for a guy with that kind of physical traits. He can run, he’s big, he’s strong, he’s powerful and he doesn’t put up a lot of numbers. Why? Because he has no wiggle.

Dave Richard: I think the Seahawks got themselves a steal. Metcalf fell in the draft because of concerns about his neck injury and a skill-set that doesn’t include a refined route tree. He’s stiff, but he’s got great straight-line speed to go with rare size. After watching Tyler Lockett make a bunch of circus catches last year, it’s not a stretch to say Metcalf can do the same and be a red-zone monster for the Seahawks to boot. All that said, he still needs coaching in a major way. If expectations are kept low, he won’t hurt your Fantasy team and will offer nothing but upside. I’m buying into Metcalf as a wait-and-see bench receiver with a late-round pick in seasonal leagues. I’ll also ticket him with a middle- to late-round dart in dynasty/keeper start-ups and a top-12 pick in rookie-only drafts.

Chris Trapasso: Let me start by writing Metcalf has more juice than Thomas, but the latter was certainly not a plodder in his prime. Thomas began his career as a large, athletic specimen with a raw game, and it showed. His first two seasons in Denver were pedestrian at their very best. As he learned the intricacies of running routes, Thomas erupted with five-consecutive 1,000-yard seasons. Even as he matured in the NFL, Thomas was best used as a bubble screen, slant, and go-route wideout, and that’s precisely how Metcalf needs to be featured to tap into every ounce of his massive talent. Like Thomas too, Metcalf will have the occasional bad drop but come down with circus grabs downfield.

Ryan Wilson: Metcalf played in just two games as a freshman before he was sideline with a foot injury. In those two appearances he had two catches — both touchdowns. He played in 12 games in 2017 and logged 39 receptions for 647 yards and seven touchdowns. Metcalf was off to a hot start last season before a neck injury ended his 2018 campaign after seven games. Still, he managed 26 receptions for 569 yards (21.9 YPC) and five scores.

Among all FBS wide receivers, Metcalf ranked 11th in Pro Football Focus‘ deep-pass-catch-rate metric and was 18th in yards per route run. He was also 127th in drop rate.

Ryan Wilson: Huge downfield target with an enormous catch radius. Metcalf eats up cushion against cornerbacks and despite poor shuttle and 3-cone drills at the combine, he routinely shows the ability to put the foot in the ground and get and out of breaks. He’s good at creating separation with shoulder fakes and blazing speed (see that 4.33 40). He also displays soft hands when hauling in long arcing throws, can high-point the ball on fade routes and has strong hands to fight off physical cornerbacks for the ball.

Here’s his one-handed grab on the first play against Alabama that resulted in a 75-yard touchdown. There’s a lot to like here:

Ryan Wilson: We mentioned the drops above — are those concentration-related or indicative of a bigger issue? Metcalf also has struggled with injuries — he played in just two games in 2016 and seven last season. Then there are the poor 3-cone and shuttle times at the combine. But here’s the thing: If you watch him play, it’s clear he can get off press coverage and in and out of his breaks.