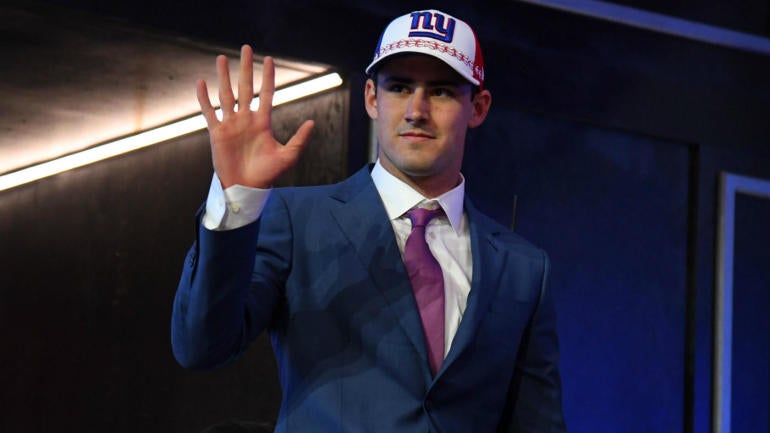 The first round of the 2019 NFL Draft is in the books and we’re fired up for a second night of action on Friday night (make sure and fire up CBS Sports HQ to watch our live recap). But first we have to make SWEEPING, PERMANENT JUDGMENTS that in no way will make us look stupid years from now.

On the bright side, I can’t give the Browns any awards this year, so that’s exciting. But there are some obvious picks here for winners and losers. If you want a deeper dive make sure and listen to the Pick Six Podcast below where myself and Ryan Wilson hammer out a full show on who won and who lost in the first round of the NFL Draft.

Did not expect to be here writing this based on the last 48 hours, when we heard that Snyder and the Redskins were thinking about dealing up to the top three picks to take Dwayne Haskins. It seemed obvious and insane and yet totally believable because the Redskins have been known to do stuff like that when Snyder takes over a draft. Someone talked him off the ledge, apparently, and the Redskins kicked back, relaxed and let Haskins fall to Washington at No. 15. There was some discussion about dissension in the Redskins building, with concerns about whether Snyder was taking over the draft and stuffing Jay Gruden/Bruce Allen in a corner. Maybe he did take over, but there was clearly a compromise here. Snyder got to stand pat and land his quarterback, and then the Redskins coughed up a future pick (a 2020 second-round pick) to move back into the first round and grab Montez Sweat, the hyper-athletic pass rusher who fell in the draft because of a heart issue, one which might have been misdiagnosed. That 2020 pick could end up being a pretty nice option if the Redskins are terrible this coming season. It could easily be top 40, but the Redskins got to move up 20 spots in the draft and get a potential home run pick. I don’t know that Haskins and Sweat are going to fix Washington in 2019, but the duo certainly give the Redskins more hope than they had 24 hours ago when it felt like fait accompli that Washington was going to end up having a quintessential Redskins draft. Kudos to Snyder for keeping his composure and navigating the draft well.

The Falcons quarterback entered the draft with plenty of weapons (Julio Jones, Calvin Ridley, Austin Hooper) and exited the first round with a new right side of his offensive line and a lot of depth in terms of protection moving forward. We all expected the Falcons to beef up their defense, but they doubled down on the offensive line, grabbing Chris Lindstrom out of Boston College at 14. It would have been surprising to see the Boston College guard go that early, but nothing was surprising after the first six picks. The Falcons then swooped back into the first round, trading with the Rams to move up and take Washington tackle Kaleb McGary. It stands to reason these guys will form the right side of the offensive line for Matt Ryan in 2019. It’s probably a projection to assume McGary can just play right tackle out of the box with zero problems, but the Falcons believe they have a problem and they did what they needed to do to solve it. A pair of rookies on that side is a little risky, but Lindstrom should be solid early next to Alex Mack. It’s not hard to fathom this working well and the Falcons offensive exploding next year. One nitpick here: Atlanta moved up from No. 45 to No. 31, which is a fairly substantial jump. It cost them a lot, though, as they sacrificed No. 79 (and No. 45 obviously) to get that penultimate pick in the first round in addition to a sixth-round pick. That 79th pick could end up being a really nice selection, so you have to wonder if McGary might not have tumbled a few more spots. If you like your guy go get him, but that wasn’t cheap.

Unfortunately for the Dolphins general manager, his first draft is always going to be compared with Dwayne Haskins. Fair or not, people are going to talk about the Dolphins passing on the Ohio State quarterback at No. 13 when the only guys on their depth chart are Ryan Fitzpatrick, Jake Rudock and Luke Falk. If Haskins is great, people will criticize the Dolphins for passing on him. But I’m including Grier here because I want to commend him for sticking to his guns despite chaos unfolding. The Dolphins know they won’t be good in 2019. They’re trying to burn down and rebuild a broken franchise. The only way to do that, Grier and new coach Brian Flores believe, is to acquire leaders to develop as the core of this roster. Christian Wilkins is just that. He’s also a great football player. The Wilkins pick received an A+ from Pete Prisco and I couldn’t agree more. This is a high-energy kid with incredible character, the first scholarship player in Clemson history to graduate in 2.5 years. Wilkins will be the heart and soul of Flores’ defense and the Dolphins took a good first step towards fixing what is wrong in Miami by standing firm and following their plan. I don’t think they’ll be good in 2019, but I don’t think they’ll mind either.

There is no doubt that Bradbury was a first-round prospect in this draft. But the question was how would he fit in terms of landing spots. Bradbury needed to find a zone-blocking team that had a void at center and buddy did he get it. The Vikings hired Gary Kubiak this offseason, which means we should expect to see a heavy focus on a zone-blocking scheme. Bradbury ran almost exclusively zone-blocking schemes at NC State, meaning we’re talking about a plug-and-play center that should boost the offensive line around him. Pat Elflein can slide over to guard and this could be a decent offensive line. A healthy Dalvin Cook could be a monster with an improved running game and Kirk Cousins should be thrilled at the first-round outcome here.

I mean, what the hell. Once again, Dave Gettleman leaves me utterly frustrated and flummoxed with his draft. I love the pick of Dexter Lawrence at No. 17, because I love Dexter Lawrence and because I’ve been predicting Gettleman would take him there for literally four months now in my mock drafts. Lawrence is the ultimate Hog Molly, a massive mountain of a man who will maul people on the interior of the Giants defensive line. He’s going to be great and he’s not some two-down defensive lineman either. But Gettleman could have potentially come away with so much more and didn’t because the Giants took Daniel Jones with the sixth-overall pick. It’s a fish/barrel situation here to pick on the Giants for doing the wrong thing; maybe every other team in the NFL viewed Jones, a Duke product who tutored under Eli Manning’s old coach David Cutcliffe, much higher than anyone knew. We were fully aware that the Redskins were interested in him at No. 15. But the Giants clearly don’t understand how draft value works. They could have taken Josh Allen at No. 6 overall (no one should deny the Giants need a pass rush) and then coupled one or two of their picks along with No. 17 to move back up and grab Jones in the middle of the first round. Lawrence would have been tougher to pull

There’s no other way to feel than betrayed if you’re Josh Rosen. He was taken with the 10th-overall pick last year, got thrust into the worst possible situation imaginable for a rookie quarterback, struggled through a season with no weapons and less protection all while not really complaining … and the Cardinals replaced him the very next year. Look, I understand the concept of drafting Kyler Murray first overall if you believe he’s the best prospect and believe he’ll thrive in this situation. I’m worried it was designed to sell tickets and to ignite interest in the Cardinals more than anything else and that’s concerning to me. Additionally, I hate the idea of having Murray + [insert whatever the Cards get back for Rosen here!] versus having Nick Bosa/Quinnen Williams + Rosen. To me there’s a clear difference in terms of the best combo. But Steve Keim is all in on Kliff Kingsbury and Kingsbury got his guy. If he’s Baker Mayfield 2.0 it’s great. If Murray has a season like Rosen did last year, everyone could be getting fired. There’s a lot at risk here. Making matters worse is the shrinking quarterback market: the Giants and Redskins won’t be trading for Rosen. The only QB-needy team — in terms of immediate need — is the Dolphins. Maybe they’ll offer a third-round pick for Rosen, but that feels unlikely. The only saving grace for Rosen, ironically, might be that market: he could end up being snared for peanuts by the Patriots or some other upper echelon organization and groomed to replace a Hall of Famer. It could be a blessing in disguise but Thursday was a no-doubt disaster for Rosen.

In every year, in every draft there’s someone who got sniped. And the Texans got sniped by Howie Roseman and the Eagles. Sitting there at 23 and badly needing an offensive lineman to protect Deshaun Watson, the Texans were watching a dream unfold in front of them when no offensive linemen were coming off the board. The first one (Jonah Williams) didn’t come off until 11 and then it was interior guys only until one pick before Houston was on the clock. Andre Dillard, the top pass protector in the class due to him having to block 795 times per season in Mike Leach’s scheme, was there for the taking, an immediate need-filler who could keep Watson from suffering interior-organ injuries and riding on busses from Jacksonville to Houston. Houston still landed Tytus Howard out of Alabama State with the next pick, but there’s little doubt Dillard was their guy in that spot. Howard has a lot of upside, but he’s less polished as a pass blocker. They did what they had to do and got a lineman, but they definitely got sniped.

After blowing up the combine with his freaky physical nature, it was widely assumed that Metcalf would not only be the first wide receiver off the board but that he would be taken within the first 15 picks or so. Instead, Metcalf is still on the board at the beginning of the second round and went after Marquise Brown (Ravens) and N’Keal Harry (Patriots). Metcalf didn’t have the best lateral movement — he jumped high, ran fast and can out bench the Mountain, but his three-cone drill and shuttle times were terrible. We’ll see how long he lasts out there, and I think there is going to be a run on wide receivers to start the second round, but not an ideal Thursday for Metcalf after an offseason of high expectations.