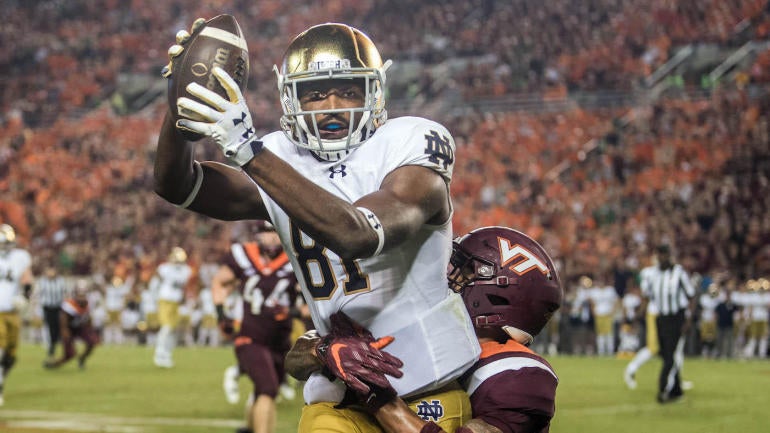 With the No. 93 pick in the 2019 NFL Draft, the Ravens selected Miles Boykin, wide receiver out of Notre Dame. Boykin is an interesting sleeper because he didn’t have eye-popping production at Notre Dame yet has a complete skill set with impressive hands, decent athleticism, and surprising downfield speed. A strong showing at the combine likely caused him to fly up boards at over 6-foot-2 and heavier than 215 pounds.

Pete Prisco: I love this kid’s ability. He has a chance to be a big-time producer if the offense can use him correctly. Lamar Jackson will love him, even after getting Marquise Brown in Round 1.

Dave Richard: If defenses in the AFC North thought playing against Marquise Brown’s speed was bad, wait until they see him and Miles Boykin. One difference between the two: Boykin is nearly 6-foot-4 and 220 pounds, so he brings size with his speed. He’s more of a finesse receiver than a physical dominator, which is disappointing given his girth, but he can track the long ball and make defenses pay with his speed. If he got tougher and fought for 50-50 balls and wasn’t shy about going over the middle, he’d be good. The Ravens might try to do just that with him. He’s not worth drafting in seasonal leagues but is worth a late-round spec in dynasty/keeper leagues and a second-round choice in rookie-only drafts.

Chris Trapasso: After the catch, Boykin doesn’t play to the superb athleticism he displayed at the combine, but he is a blur running routes and he is a natural high-pointer of the football. More linear of an athlete than someone who’ll make defenders miss in space, the 6-foot-4 Boykin should be used on vertical routes and screens mostly but he’s not a stiff mover.