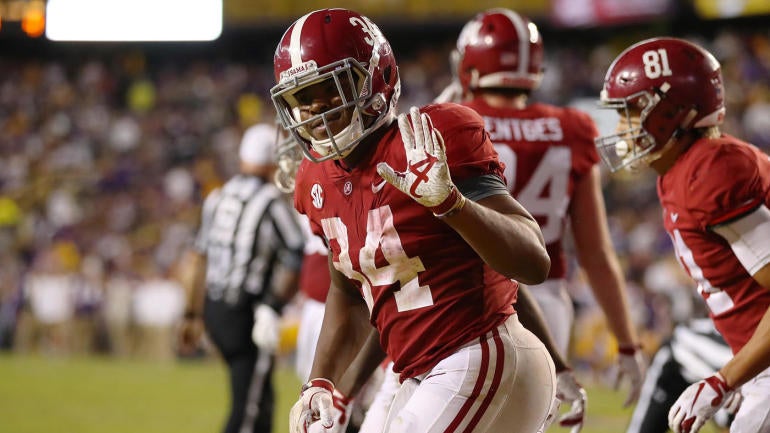 With the No. 87 pick in the 2019 NFL Draft, the Patriots selected Damien Harris, running back out of Alabama. Runs with a lot more power than his listed weight would suggest and has loose, relatively fluid hips, a combination that leads to defenders bouncing off him. Good, not great speed and cutting ability in space, and occasionally can make a defender miss. He’s more of contact balance/power back and a rock in pass protection.

Pete Prisco: The Patriots picked up an SEC running back in the first round last year, and here they get a nice player who can mix in behind Sony Michel. They had bigger needs, but with all their picks, might as well take him here if you like him.

Dave Richard: I was a fan of Damien Harris, a two-down bulldozer with good speed and very good acceleration, but I can’t recommend him if he’s going to end up being a part-timer with the Patriots behind Sony Michel and James White. Frankly, he’s an unfathomable backup in that he’s built like an Adonis and never ever goes down to an arm tackle. He can wear out tired defenses in the fourth quarter real quick. But he’s not shifty and is a gets-what’s-blocked runner. I thought he was a natural receiver out of the backfield but also a work-in-progress as a pass protector, so his third-down opportunities aren’t going to be frequent anytime soon. But he’s a mature player with the exact kind of mindset that plays well with Bill Belichick and the Patriots. I can dig drafting him as a handcuff to Michel in the deepest of seasonal leagues, but if you’re going 15 rounds on Draft Day, he’s probably not in the cards. Expect Harris to file in as a late-rounder in dynasty/keeper formats and as a second-round choice in rookie-only drafts.

Chris Trapasso: Harris was a mainstay in the Crimson Tide backfield for years and surprised many by returning for his senior campaign. He kinda/sorta got overshadowed by Jacobs but is a quality, NFL-caliber back in his own right. A thunderous runner with tree trunks for legs and loose hips, weak tackle attempts often glance off Harris, and he has adequate acceleration to create long runs in some instances. When he entered the league out of Ohio State in 2014, Hyde was a compact power runner much more fluid in his hips than most backs at his bigger size.