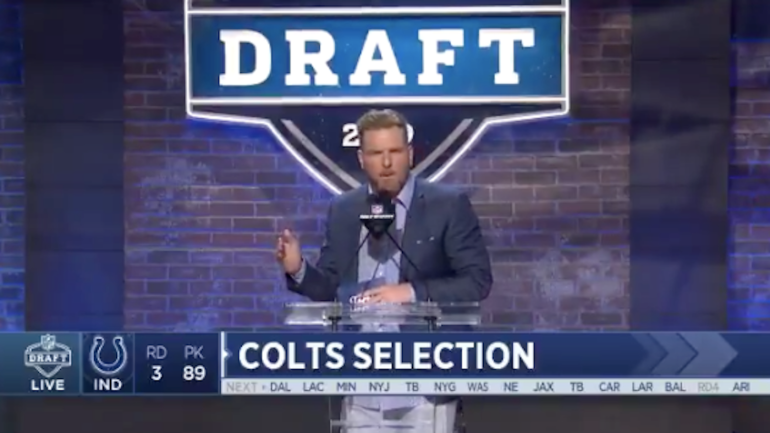 NASHVILLE — It’s not often that a former NFL punter gets asked to announce a draft pick, but that’s exactly what happened on Friday when the Colts sent out Pat McAfee to make the announcement for their third round pick.

The good news for punters everywhere is that based on McAfee’s performance, there’s a good chance the NFL will only be asking punters to announce every draft pick from now. The former Colts player, who retired after the 2016 season, went completely off the rails in a way that only McAfee can.

McAfee currently has a deal with WWE, which makes sense, because he went into full crazy mode while announcing the pick. First, he made fun of the Titans.

And just in case you’re wondering, the Colts went 15-1 against the Titans during McAfee’s eight-year career, so they definitely had that one coming.

After making fun of the Titans, McAfee also blew off some anger against his own team. During his time on the stage, McAfee pointed out that although he retired during the same year as Robert Mathis and Joe Reitz, he was never asked back to announce a draft pick like the other two were, and the worst part is that he was replaced by an animal.

“Robert Mathis announced a pick, Joe Reitz announced a pick and then an ORANGUTAN announced a fourth-round draft pick,” McAfee said. “I was replaced by a zoo animal. I was not upset about it because the orangutan was terrible at his job.”

You can see the video of McAfee’s entire draft announcement below.