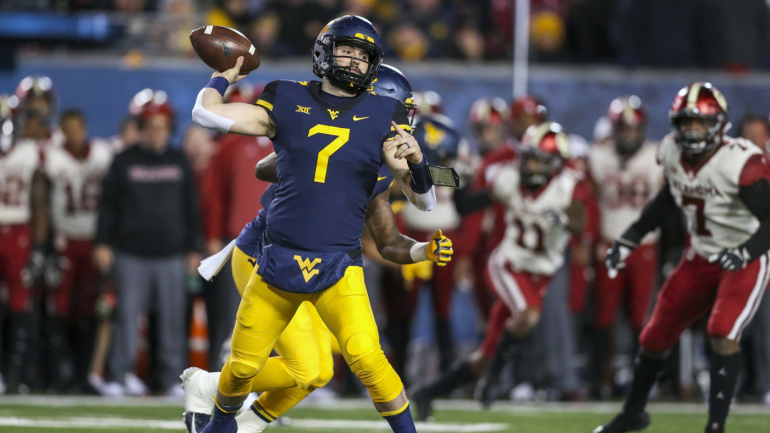 With the No. 100 pick in the 2019 NFL Draft, the Panthers selected Will Grier, quarterback out of West Virginia. Very good understanding of pre-snap defense and gets the ball out quickly on shorter routes. If Ryan Finley is an anticipation thrower, Grier is a timing thrower on deeper routes. He shows good touch on sideline routes though he sometimes tries to make plays when throwing the ball away is the smart move. Downfield arm-strength accuracy is a concern, as is his decision making, which can lead to unforced errors.

Pete Prisco: He is being taken as a backup, but are we sure he’s better than Kyle Allen? This one doesn’t make a lot of sense to me, as you can get contributors even late in the third round.

Dave Richard: I was over the moon for Will Grier after watching his film. He’s a total gamer with a quick release, good arm strength, very good velocity and the ability to make quick decisions (even in a breaking pocket). But I get why he fell in the draft — he’s 24 years old, a little undersized, was once busted for PEDs and then changed schools, and is more of a gunslinger than a patient, refined passer. The good news is that the Panthers have a capable backup in case Cam Newton misses any playing time. The bad news is that Grier won’t make any Fantasy rosters anytime soon.

Chris Trapasso: Dalton was a second-round pick out of TCU in 2011, and his effectiveness in the NFL has largely been contingent upon the talent around him: Offensive line and receivers. Grier seems like that type too. When kept clean, Dalton, who isn’t big for the position and doesn’t have a huge arm, can make any throw. Under pressure he typically crumbles … another way Grier is just like him. At West Virginia, when he was out of harm’s way, Grier was accurate and knew where to throw the football. Under pressure … not so much. If he lands with a team that has an impressive collection of receivers and a good line, Grier can be a mid-level quarterback in the NFL, capable of high flashes. If that’s not the situation in which he lands, Grier’s likely to struggle.