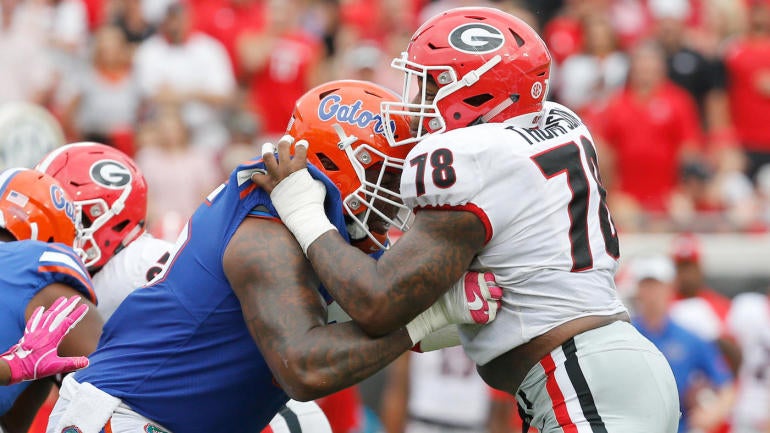 With the No. 35] pick in the 2019 NFL Draft, the Jaguars traded up to select Jawaan Taylor, offensive tackle out of Florida. Immensely powerful tackle with above-average mobility in any direction and while not super explosive, he can get to the second level relatively quickly on outside runs and destroy linebackers. At times his lateral quickness is pushed to the limit by speedy edge rushers, but he has heavy hands he deploys with mostly good timing and decent accuracy. Franchise right tackle.

Pete Prisco: The Jaguars have knocked it out of the park (with Josh Allen in first round and now Taylor). This kid is nasty. Talk about big, physical guys. Put him at right tackle and now all of a sudden your offensive line is solidified. I love this pick. Jaguars nailed it.

Chris Trapasso: Williams was picked in the first round of the 2010 draft after a dazzling career at Oklahoma in which he showcased franchise tackle power in the run game and ideal fundamentals with his hands and feet to be an above-average pass protector. Since then, he’s become one of the most well-rounded tackles in football. Taylor is a wide, heavy-handed blocker who will drive opponents into the ground in the run game and uses his smooth athleticism to deal with speed rushers. Power rushers don’t give him issues. Like Williams was, Taylor can be tested by quick, low-to-the-ground defenders because he’s not an elite athlete, but don’t mistake Taylor for a plodding tackle prospect.

Among all FBS offensive tackles, Taylor ranked 10th in Pro Football Focus‘ pass-blocking-efficiency metric and was successful on run-blocking plays 92.4 percent of the time.

Ryan Wilson: Taylor can be susceptible to the bull rush but has the strength to regain his balance and hold his ground. Even when he’s beaten inside, he has the athleticism to recover. Taylor can get grabby when defender gets him off-balance, or isn’t where he expects the defender to be, especially on running plays.