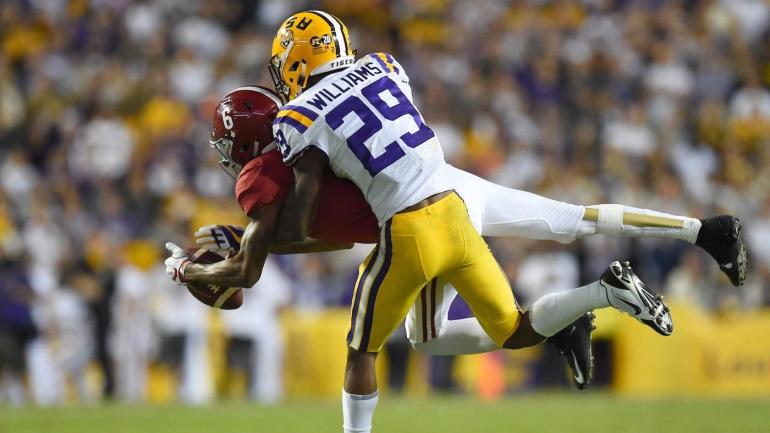 With the No. 46 pick in the 2019 NFL Draft, the Browns traded up to select Greedy Williams, cornerback out of LSU. Silky smooth in coverage and has full confidence in his abilities and athleticism. Can blanket receivers when he’s locked but other times looks to lack focus.

Pete Prisco: I do like his cover skills, don’t get me wrong. Let’s face it when you can rush the passer with Olivier Vernon on one side and you got the other guy Garrett on the other side, you are gonna be able to attack and play press man. I just don’t like his ability to tackle.

Chris Trapasso: Gilmore was a sticky-as-glue man-to-man corner at South Carolina, and that led to him being a top 15 pick in the 2012 Draft. His length, smooth athleticism, and good ball skills allowed him to thrive in the highly competitive SEC. Much of the same is true about Williams, another somewhat tall, effortless athlete with above-average downfield speed and awareness to play the ball when it’s arriving. Williams is the preeminent man coverage corner in this class.

Among all FBS cornerback, Bush ranked 20th in Pro Football Focus’ coverage-snaps-per-reception metric and had a 58.1 passer rating against wide receivers.

Ryan Wilson:  At 6-foot-2, has the height NFL teams look for in long, physical cornerbacks to matchup with bigger receivers. Williams also ran a 4.38 40 at the combine, proving that he has unparalleled speed too. He’s silky smooth in coverage and has full confidence in his abilities and athleticism. He can blanket receivers when he’s locked in.

Here’s an example of Williams’ mirroring skills, which is second to none in this draft class:

Ryan Wilson: Sometimes Williams looked almost bored. Will the occasional lack of focus be an issue at the next level? There are also concerns about his willingness to tackle.