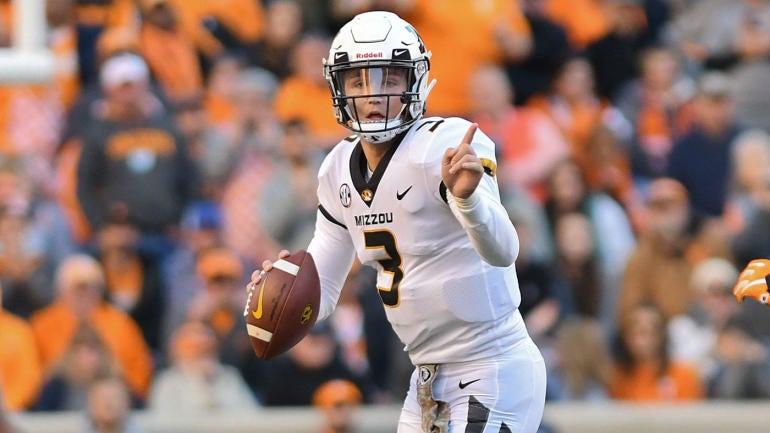 With the No. 42 pick in the 2019 NFL Draft, the Broncos traded up to select Drew Lock, quarterback out of Missouri. Good-sized, decently athletic, big-armed pocket passer who can throw from many platforms and bases with good, not great accuracy and lives for the deep ball. Occasional bad miss on easy throws when he trusts his arm too much and delivers while off balance. Flashed the ability to read the entire field and typically showcased good pocket patience.

Pete Prisco: I love the kid. He’s got the swagger, a big arm. Everything I love in a quarterback. I think he’s gonna command the huddle. He’s got a big arm, he’s a gunslinger. A lot of people compare him to Jay Cutler, but you know what there’s a little Brett Favre in there too.

Dave Richard: Remember reading about Drew Lock as a potential first-round pick of the Broncos at 10th overall? Well, they got him at 42nd overall — but it’s not by accident. Lock is a fascinating, and frustrating, quarterback prospect because he’ll demonstrate perfect ball placement on some tosses and then miss a target seven yards crossing in front of his face or chuck up an easy interception. It’s imperative for Denver’s coaching staff (and maybe John Elway himself) to work with the 6-foot-4 quarterback on his footwork and cutting down on his mistakes and giving him plenty of time to grow and become a more efficient gunslinger. I think Broncos fans, and Fantasy fans, will dig his moxie to make tight throws and run for yardage when defenses don’t account for him. If he can improve when under pressure and not make silly, random mistakes with some of his throws, he’ll be very good. The only people taking him in Fantasy are in long-term formats, where he’s a late-rounder in dynasty start-ups and a late second-round pick in rookie-only drafts.

Chris Trapasso: Lock is a cannon-armed pocket passer capable of making the jaw-dropping throws down or across the field who plays the game with “shooter’s amnesia.” If he makes a bad decision or throws a pick, it doesn’t impact his aggressiveness on the next play or series. He can effortlessly throw from a variety of arm angles, and the arrow is pointing up in terms of his pocket patience and presence, although hiccups in those areas are still present. He won’t run away from many NFL linebackers but can pick up yards with his feet when needed, and his accuracy downfield is more impressive than his touch on short passes. Sounds a lot like Stafford.

Ryan Wilson: As a freshman in 2015, Lock started the final eight games of Missouri’s season. In 2016 he led the SEC in passing yards, and a season later he helped the Tigers to their first bowl appearance since 2014. Each year, his completion percentage and touchdowns increased, but instead of declaring for the draft he returned for his senior season.

The good news is that Lock saved the best for last. After a slow start under a new offensive coordinator in 2018 — Missouri started 3-3 and Lock had 12 touchdowns, six interceptions and completed fewer than 50 percent of his throws in those losses — he went 5-2 and tossed 16 touchdowns against just two picks. And in those five wins Lock completed at least 64 percent of his attempts.

Ryan Wilson: Lock reminds some talent evaluators of Matthew Stafford. He reminds us of Jay Cutler. Wherever you are on the spectrum, the main takeaway is undeniable: He has a rocket right arm, and that is his biggest asset. He’s also an extremely accurate deep-ball thrower who plays with confidence.

Early in the season, when Lock was struggling in a new system, he flashed glimpses of just how good he can be. Here he is against Alabama, throwing a laser to the back of the end zone.

Ryan Wilson: Lock’s hands measured just nine inches, which was the smallest among all quarterbacks at the Senior Bowl. Sam Darnold also had small hands and he had a solid rookie season, and Lock’s undersized hands were never an issue on the field and NFL teams likely won’t ding him for it. More importantly, Lock struggled with short and intermediate throws, some of which can be blamed on poor footwork. He also struggled to go through his progressions, which is not an unusual complaint about young quarterbacks.