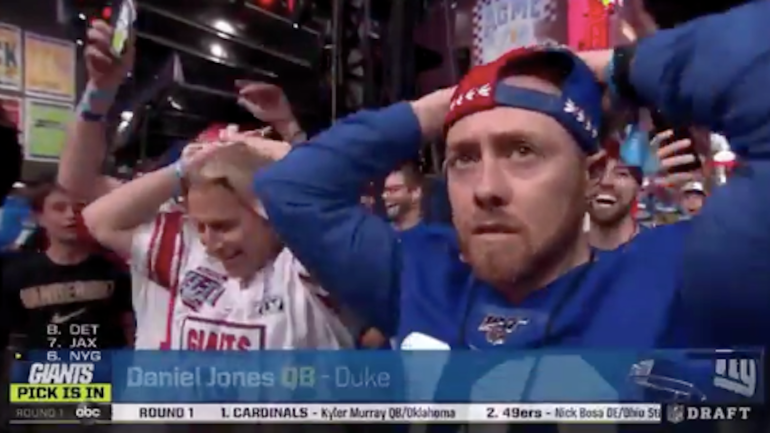 If you see any Giants fans this weekend, you might want to give them a hug, because it’s been a rough 24 hours for the members of Big Blue nation.

Although Giants fans went into the draft knowing that New York might take a quarterback in the first round, it seems that most fans were hoping that quarterback would be Dwayne Haskins or Drew Lock, or really, anyone except for the quarterback that the Giants actually drafted.

With the sixth-overall pick in the 2019 NFL Draft, the Giants selected Daniel Jones, which basically started a total meltdown by Giants fans around the country. Although there was some speculation before the draft that the Giants might be interested in taking Jones, most people either thought that was a smokescreen or that they would do it when they made their later selection in the first round at 17th overall.

The Giants’ decision to take Jones so early in the draft pretty much left all of their fans in shock, and just so you can understand how much shock they were in, let’s get to all the reactions, starting with Double Vodka Don on Twitter, who now hates everything in life.

Our next Giants fan was so disappointed, he couldn’t even react with actual words.

That’s the look of a fan who thought the Giants make take Jones, but was really, really, hoping they wouldn’t.

Another guy who hated the pick was Jim from New York.

Jim seems kind of done with the Giants.

Giants fans who were at the draft in Nashville were also disappointed by the pick.

The Giants actually held a draft party at MetLife Stadium, and let’s just say things got pretty ugly there after the pick was announced.

Here’s another angle of the reaction at MetLife Stadium, and as you’ll notice below, fans were so upset that part of the video had to be bleeped out.

The Giants might want to think about not holding a draft party next year.

When the Giants introduced Jones in a tweet, things only got worse.

When your fans are quitting on a night where you had three first-round picks, that’s usually not a good sign.

Based on other feedback from Twitter, it seems that Giants general manager Dave Gettleman is the only person alive who actually thinks Jones is going to be a success in the NFL.

Gettleman could have tried to make things better during his post-draft press conference on Thursday, but instead, he might have actually made things worse by pointing out that Jones would end up sitting for as many as three years behind Eli Manning.

Finally, let’s end things here with Dwayne Haskins, even he couldn’t help but chuckle at the fact that the Giants took Jones with the sixth overall pick.