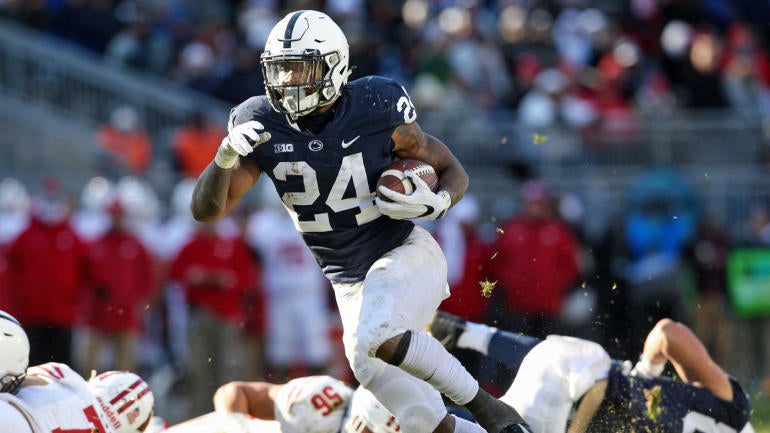 With the No. 53 pick in the 2019 NFL Draft, the Eagles selected Miles Sanders, running back out of Penn State. Sanders, who played behind Saquon Barkley in 2017, is a physical, compactly built one-cut runner who is an asset in the pass game. He can run patterns out of the backfield as well as line up in the slot, and when targeted he shows soft hands and the ability to make defenders miss in open space. Sanders is a shifty runner through the hole who uses eyes and quickness to set up blocks, then sets up second-level defenders with feints; he’s hard to tackle in the open field because of strength, low center of gravity and effective use of the stiff-arm.

Pete Prisco: I give this an A grade, you know why? You draft a running back in the second round and it’s okay , you can get away with that. Not in the first round, second round is fine. One-year wonder, right? He only played one year behind Saquon Barkley. That’s okay when you are a running back, there’s no wear and tear.

Dave Richard: The guy behind Saquon Barkley for two years at Penn State, Miles Sanders has a chance to evolve into a three-down running back for the Eagles, but not right off the bat. Instead, he’ll share with Jordan Howard — not that it should scare you from taking him. Sanders has a nice combination of lower-body strength and good speed, but his best asset is his very good lateral quickness to make cuts and create room to run. He can stop on a dime and burst past defenders for additional yards. He also has good, underrated (and under-utilized) hands that, combined with an improvement in route-running technique, can push him into a bigger role. He needs volume for his Fantasy stock to skyrocket, but for now the fit with the Eagles is very good. Expect him to get taken just a couple of rounds after Howard — could be a deal where Howard goes in Round 5 and Sanders gets snapped up in Round 7. He’ll also be a top-eight pick in rookie-only drafts (potentially a top-five pick) and a middle- to late-round pick in dynasty/keeper leagues.

Chris Trapasso: Crafty between-the-tackles runner with deceptive elusiveness, high-end balance, and surprising downfield speed. That describes both Michel — who went in the first round in 2018 — and Sanders, the back who patiently waited behind Saquon Barkley for years at Penn State and finished his career with the Nittany Lions averaging a hefty 6.0 yards per carry on 276 total attempts. Like Michel, Sanders is a footwork master capable of making multiple cuts to keep linebackers whiffing at air at the second level.