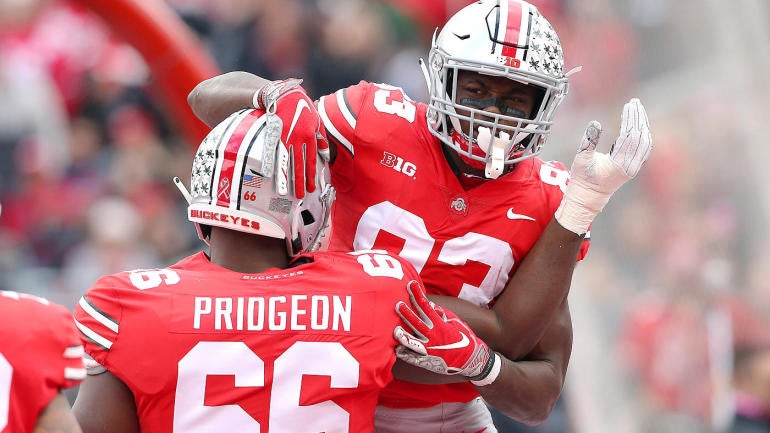 With the No. 57 pick in the 2019 NFL Draft, the Eagles selected J.J. Arcega-Whiteside, wide receiver out of Stanford. Looks like Mike Evans but could be more Anquan Boldin based on how fast he runs (Arecega-Whiteside didn’t run the 40 at the combine). Regularly more physical than smaller receivers and his basketball background (both his parents played professionally) shows up on tape when he posts up defensive backs for jump balls in the end zone. He’s a high-point catcher on downfield throws and is rarely out of position to make play on ball. Questions will be about deep speed and separation downfield.

Pete Prisco: I think there were better options on the field. He didn’t play to that speed. When you watched him on tape you say he’s a big, physical guy but he doesn’t run that well, well he did run that well. I worry when guys don’t play to their speed.

Dave Richard: Arcega-Whiteside could be a cheat code with the Eagles. That’s because he’s a giant receiver (6-foot-2, 225 pounds) who has the traits of a power forward that can go up and high-point a pass and be an easy red-zone dominator. He had 14 touchdowns on 63 catches for 1,059 yards with the Cardinal last season, throttling over slower and shorter competition. Putting it another way, he’s better than 50-50 to catch 50-50 jump balls. The kid has work to do when it comes to route-running and learning how to separate against top-level competition, but for now the Eagles can deploy him as a mismatch. How the heck are defensive coordinators going to match up against him, Zach Ertz and Dallas Goedert at the same time?! The pick makes me like Carson Wentz a little more. I might consider Arcega-Whiteside with a late pick in seasonal leagues but I’ll be more interested in taking him late in dynasty/keeper leagues and with a top-20 pick in rookie-only drafts.

Chris Trapasso: Arcega-Whiteside measured in at 6-foot-2 and 225 pounds with 33 1/4-inch arms and 9 1/2-inch hands at the combine. So he’s not as monstrous as Evans, who was just under 6-5 and 231 pounds with 35 1/8-inch arms and 9 5/8-inch hands at his combine in 2014. But their playing styles couldn’t be more similar. Like Evans, Arcega-Whiteside is a deceptively fast linear wideout with flat-out stupid ball skills. I’ve called him the best rebounder in this class for months now, and he’s dominant in that area. Evans was the same type of overwhelming power forward when he entered the league out of Texas A&M. Arcega-Whiteside isn’t totally without lateral mobility either. In some instances, he can pick up yards after the catch.