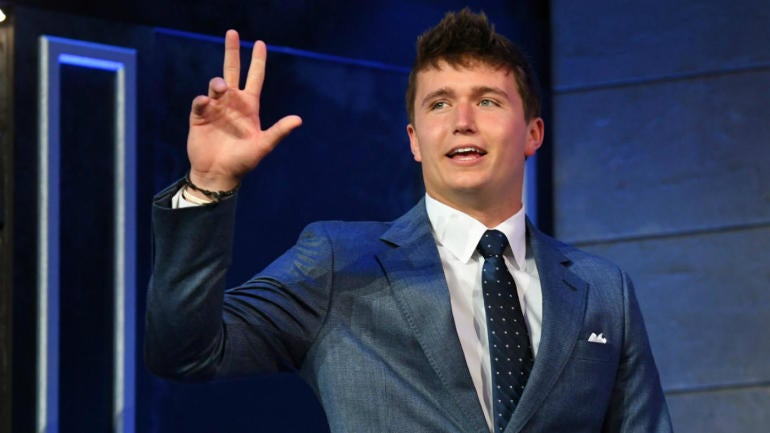 Rounds 2 and 3 of the 2019 NFL Draft are in the books and it was a wild ride. John Elway got his quarterback — but not at No. 10, where some had mocked Drew Lock going, but at No. 42 overall after trading up.

The Cardinals had made the biggest waves on Day 1 by picking Kyler Murray, and they continued to make big moves, trading Josh Rosen to the Dolphins and using the Round 2 pick they got in return on a receiver for Murray (Andy Isabella). The Browns, already a trendy playoff pick, boosted that buzz even further when they made their first selection of the entire draft at No. 46 overall and added Greedy Williams. The Eagles got better on offense (Miles Sanders, J.J. Arcega-Whiteside), combine superstar D.K. Metcalf fell all the way to the last pick of Round 2, and the Bears traded up in Round 3 to find a replacement for Jordan Howard.

Speaking of trades, there were 18 — EIGHTEEN — of them on Friday, and the Vikings were seemingly in all of them.

Want to get picks, analysis, grades and everything you need to know on Saturday as the draft continues to unfold? Be sure to check out our live draft coverage here on CBS Sports HQ. You can also download the CBS Sports app for free on any mobile or connected TV device. Visit our Draft Tracker to get all the info you need to know pick by pick from Rounds 2-3. Or you can keep reading for a summary of the action, then check out our live blog at the bottom of this post to relive it all.

Senior NFL writer Pete Prisco provided his grades and analysis on every Day 2 pick, and it’s fair to say some teams fell flat while others made great selections. Prisco’s first A of the night went to the Jaguars, who picked up Jawaan Taylor with the third pick of Round 2. Here’s what Pete wrote about it:

The Jaguars have knocked it out of the park (with Josh Allen in first round and now Taylor). This kid is nasty. Talk about big, physical guys. Put him at right tackle and now all of a sudden your offensive line is solidified. I love this pick. Jaguars nailed it.

Pete wasn’t nearly as high on the Raiders’ selection of Trayvon Mullen five picks later, which he gave a C+:

I think there were better options here. I think Greedy Williams, even though he’s a pile jumper because he doesn’t tackle anybody. You’ve still got to get that cover guy. He covers, he just doesn’t tackle. Don’t like what the Raiders are doing.

You can check out all of his grades right here for Round 2 and Round 3.

There’s a strong group of wide receivers (highlighted by Hakeem Butler and Kelvin Harmon) available, as well as some strong defensive players. Check out Chris Trapasso’s list of the 25 best available players for Day 3.

Stay tuned to CBSSports.com where we’ll have a mock draft for Round 4, bold predictions for Day 3, and plenty more breaking down the draft.