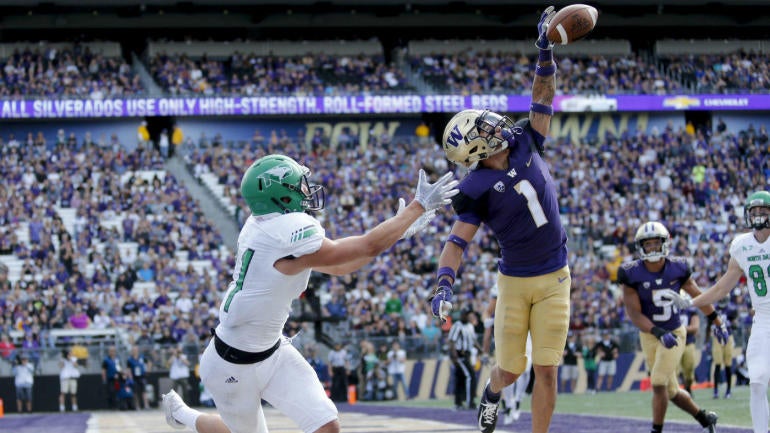 With the No. 33] pick in the 2019 NFL Draft, the Cardinals selected Byron Murphy, cornerback out of Washington. Impressive change of direction and mirroring techniques and shows good anticipation on route progressions. Also effective when coming off one route to attack another. Needs to do a better job of disengaging from WR blocks on running plays but an athletic cornerback plays much bigger than his 5-foot-11 frame.

Pete Prisco: I like this move. I think this kid is a feisty kid. He’ll stick his head in there and he will tackle. There are some corners in this draft that don’t tackle (see Greedy Williams), but this kid is tough. The Cardinals rebounded from a tough first night.

Chris Trapasso: While “zone corner” has a negative connotation to some, it shouldn’t. It takes plenty of intelligence and a lot of twitchiness to excel in zone, and Hayward has become an elite player at his position without staying in the pockets of receivers all over the field. Murphy can be that type of high-impact, zone cornerback at the NFL level, and he has the smoothness in his hips and ankles to calmly man the slot if needed.

Among all FBS cornerback, Murphy ranked 17th in Pro Football Focus’ yards-allowed-per-snaps-coverage metric and had a 54.5 passer rating against wide receivers.

Ryan Wilson: Murphy has impressive change-of-direction ability and mirroring techniques and shows good anticipation on route progressions. He’s also effective when coming off one route to attack another.

Here’s an example of Williams’ ability to come off one receiver to attack another route:

And he’s not just a zone corner — here he is locking down the receiver in man coverage:

Ryan Wilson: Murphy needs to do a better job of disengaging from wide receiver blocks on running plays but there’s no doubt — he’s an athletic cornerback who plays much bigger than his 5-foot-11 frame. Some NFL teams have concerns about his size — he also ran a 4.55 40 — but his tape is among the best in this class.