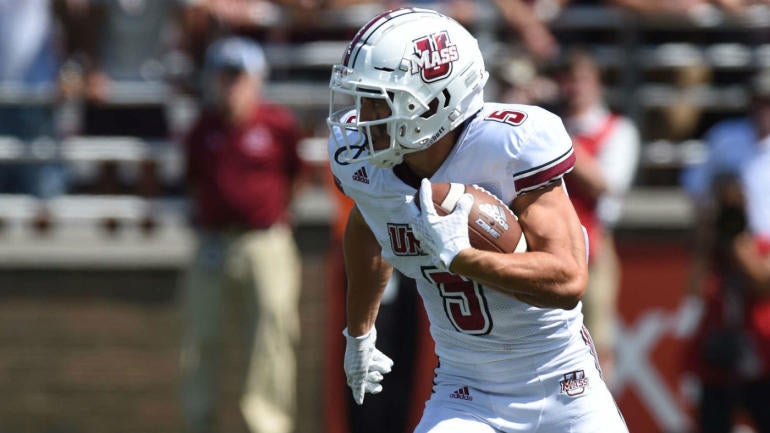 With the No. 62 pick in the 2019 NFL Draft, the Cardinals selected Andy Isabella, wide receiver out of UMass, after trading Josh Rosen to the Dolphins. Can line up anywhere on the field, a former high school sprint champion, Isabella is a legit deep threat despite his size (5-foot-8). He ran a 4.31 40 at the combine and that translates to his game speed too. He led the nation in receiving yards per game in 2018 and had more than 200 receiving yards against Georgia.

Pete Prisco: The Cardinals need to get playmakers and this is a guy that’s a playmaker. He can fly. I love Andy Isabella. He has a chance to be special. I don’t like what they’ve done in the draft, but this one actually makes sense.

Dave Richard: Want a dude with speed and a knack for getting open? Andy Isabella is it, and he’ll be juicy in the Cardinals’ Air Raid offense. He’s smallish, but that can be overcome in the Cardinals offense that relies on well-run routes and making plays in space and running after the catch. Isabella can do that. I’m excited about his potential but will pump the brakes on him in seasonal leagues. Look his way with a late-round pick in dynasty/keeper leagues and a late Round 2 pick in rookie-only drafts.

Chris Trapasso: With 4.31 speed, nifty feet, and a small frame, I couldn’t help but slap a Cooks comparison on Isabella. Not to mention, like Cooks at Oregon State, Isabella was an elite producer in college. While he has enough polish to play on the outside, you want him in the slot, which is the case with Cooks too. And both are must-feature players in the screen game because of their acceleration, violent cuts, and top-end speed.